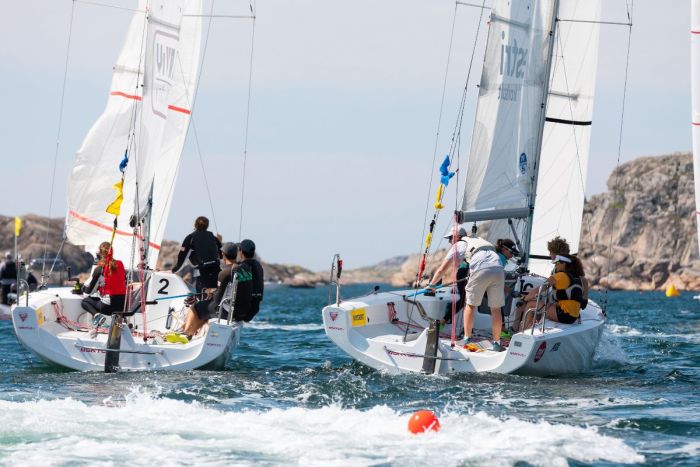 Nicolai Sehested and his Gringo Sailing Team won all their matches but one on day two of Midsummer Match Cup. On the left is Chris Poole (USA) and Riptide Racing. Credit: Joachim Bråse​.

Stronger winds brought a lot of action two the racecourse on day two of the inaugural edition of Midsummer Match Cup in Skärhamn, Sweden. Nicolai Sehested and his Danish/Brazilian Gringo Sailing Team had an impressive run and are now on top of the scoreboard.

Yesterday’s light and shifty winds turned into perfect conditions today with sun and wind increasing to 15 knots. British skipper Ian Williams (Team GAC Pindar) and Eric Monnin’s Capvis Swiss Match Race Team are still undefeated but Nicolai Sehested and his Gringo Sailing Team won all their matches but one and moved up to the top of the scoreboard. Sehested has formed a new team with his long-time match racing partner and countryman Peter Wibroe and the Olympic gold medal duo Martine Grael and Kahena Kunze from Brazil.

“I have a fantastic crew. I’ve been away from match racing for some time but with these sailors in my team it makes my life so much easier. I just need to get us over the starting line in one piece and the rest of the team will get us to the finish. They kept us really strong in the manoeuvres and in speed today,” said the Danish Ocean Race veteran after completing his last win of the day against Swedish skipper Anna Östling and her Team Wings.

“We were actually hoping for light winds since we haven’t match raced so much together but when the breeze picked up we started having really good boat handling. Maybe it isn’t a surprise because Martine and Kahena are the best in the world at what they do and Peter and me have been doing this for a long time as well. It’s still early in the event and our goal was to reach the quarterfinals, so from now on we will just enjoy it, but if we are sailing like today I think we can do pretty well.”

Martine Grael, Ocean Race sailor and Olympic gold medallist in the 49er FX class in Rio de Janeiro in 2016 together with Kunze, is looking forward to the next stage of the regatta:

“We have had a really good day with good boat handling which helped us perform well in the tight match racing situations. We have already exceeded our expectations, but I really like the crew we have and it’s been a great event so far. So we feel excited and look forward for some more breeze the coming days,” said Grael.

One of the highlights of the day was the match between the two reigning match racing world champions, Lucy Macgregor (GBR) and Torvar Mirsky (AUS), which Macgregor won.

“We had quite many races this afternoon which was fantastic and we won most of them. We are starting well, we won all our starts but the last one against Pauline Courtois, and the teamwork has been awesome. We stepped up a level when the wind came in, I don’t think we made a single mistake with the boat handling and obviously that’s a big gain over other teams who are still making a few errors,” said Lucy Macgregor.

Swedish skipper Johnie Berntsson is highest on the scoreboard of the Swedish teams with five wins and two losses. He took points against both Mirsky and Macgregor.

“It’s a great feeling to beat two world champions and I’m proud of the fighting spirit in the team today when the wind picked up. We still have some things to work on, we need to have better timing in our manoeuvres and tomorrow all points are important if we are going to advance to the quarterfinals,” said Berntsson.

The top eight teams advance to the next round and nine flights remain to be raced in the Round Robin. The quarterfinals begin tomorrow afternoon and the racing will be broadcast on the event's website www.midsummermatchcup.com from 12.00 CET.

Full results from Midsummer Match Cup can be found here