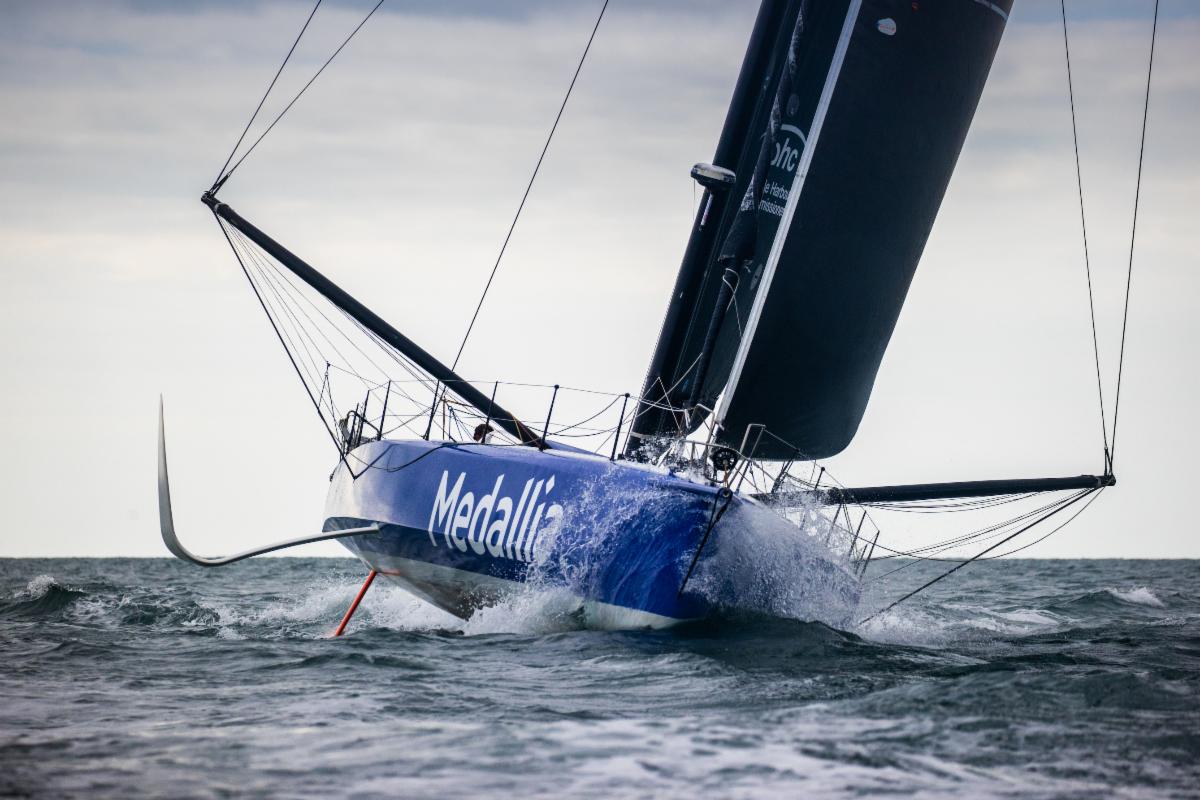 At least four IMOCA teams are planning to compete in the Sevenstar Round Britain & Ireland Race: Sam Davies with Initiatives-Coeur, Pip Hare with Medallia, Ollie Heer with Oliver Heer Ocean Racing and James Harayda with Gentoo 2.

So far, 29 teams are among the early entries and expressions of interest for the race which is scheduled to start from Cowes, Isle of Wight on August 7 2022.

The 1,805 nautical mile race around Britain and Ireland is organised by the Royal Ocean Racing Club every four years and is considered to be one of the toughest challenges in the sport of yacht racing. The Sevenstar Round Britain & Ireland Race Race Record for monohulls 60ft and less was set in 2014 by Artemis-Team Endeavour, skippered by Brian Thompson: 5 days 14 hours and 54 seconds.

Pip Hare shot to fame in the 2020-21 Vendée Globe, completing the solo round the world race in one of the oldest boats in just over 95 days. Pip is back with a newer generation IMOCA Medallia; the foiling 2015 VPLP/Verdier design won the 2016-17 Vendée Globe and was the second boat to cross the finish line in the 2020-21 edition. Just last week, after a major winter refit, Medallia went for a first big sea trial from Gosport to Portugal.

“It has been a really hard push to get the boat ready for the sea trials, but what a ride! 25-30 knot reaching conditions,” commented Pip Hare. “On trial with Jack Bouttell and Olly Young we had a blistering sail down to Portugal, beating the shore team who went by road! We got a real taste of what is to come and it is so exciting.”

Pip Hare competed in the 2018 Sevenstar Round Britain & Ireland Race with Chris Frost and Elin Haf Davies in the Class40 Aparito. “As friends we wanted to do this race together, but it was a pretty old Class40 to be honest!” admitted Pip. “We did race Aparito really hard and at times we were ahead of some of the modern Class40s, which was really amazing. But we were sticking the boat back together as we were going round!”

“For the 2022 race I have an incredible boat and I am racing with a really great crew: Jack Bouttell, Ben Schwartz, Paul Larsen and Nick Bubb. Their incredible knowledgeable and hunger for racing will mean we can push the boat in race conditions. This will enable me to become a better sailor with the new Medallia.”

Sam Davies has three Vendée Globe attempts in her impressive racing CV, including fourth in 2008-09. Sam Davies is the most experienced of the early expressions of interest and has a new Sam Manuard designed boat in build, hoping to be ready for the Sevenstar Round Britain & Ireland Race.

Sam’s first Round Britain and Ireland was in 2009 on board AVIVA, skippered by Dee Caffari, setting an all-women team course record. Sam’s last appearance in the race was as skipper of the VO65 Team SCA in 2014, setting a new outright women’s record for the course and the race: 4 days 21 hours 00 minutes and 39 seconds.

Ollie Heer has competed in two previous editions of the Sevenstar Round Britain & Ireland Race. In 2018 as boat captain for Giles Redpath’s IRC Lombard 46 Pata Negra, Ollie was on the team for the overall win. The 2022 edition will be Ollie’s debut race in his 2007 Farr-designed IMOCA Oliver Heer Ocean Racing. The boat will have four crew composed of south coast UK sailors, yet to be announced. Ollie is no stranger to the IMOCA class having sailed over 60,000nm as boat captain for Alex Thomson’s HUGO BOSS.

“Right now, the biggest challenge is managing my time correctly and having the funding to reach a level that I aspire to,” commented Ollie Heer. “In the whole world of offshore racing there isn’t a start and finish line with a bigger history than the Royal Yacht Squadron Line, and there is a logistical advantage in starting and finishing in the Solent.

“This year’s race is all about reliability for me and the Sevenstar Round Britain & Ireland Race gives the perfect platform to test the boat: 2,000 racing miles with all kinds of conditions, where we can put the foot down and try to keep the boat in one piece. There will definitely be some challenges on the race course. For an up-and-coming IMOCA team this is the perfect race; we can’t wait to hit the start line.”

Racing with a crew of four, James Harayda will be taking part in his first Sevenstar Round Britain & Ireland Race in his 2007 Group Finot designed IMOCA Gentoo 2. At 24 years old James is currently the youngest IMOCA skipper in the race. James has competed in many of the world’s largest offshore races and is a two-time British Double Handed National Champion with Dee Caffari.

“This is a big challenge on so many different levels; it is a massive step up and very exciting,” commented James Harayda. “The Sevenstar Round Britain & Ireland Race will deepen my knowledge of the boat and I am a competitive person so would also like to do well. Ollie (Heer) is a great guy and we get on really well. We intend to support one another over the next two years, but this is a race. Once we get started the gloves will be off and we will be in full-blown racing mode.”

Pip Hare commented on the new British based IMOCAs competing in the Sevenstar Round Britain & Ireland Race: “It is exciting to have more IMOCAs in the UK and on the start line for this race. This race is not just about who has got the most up-to-date boat. Racing around Britain and Ireland is massively tactical and hugely challenging. I have been that under-dog and I remain humble and respectful to my competitors; nothing is for granted.”

The Sevenstar Round Britain & Ireland Race is scheduled to start from Cowes on Sunday August 7 2022. Starting from the Royal Yacht Squadron Line, the fleet race east through the Solent, past the headlands of the South West of England and into the Celtic Sea and the West Coast of Ireland. The Atlantic racing continues past St Kilda, up to the most northerly point of the course, Muckle Flugga on the 61st parallel. Turning south through the North Sea, then along the English Channel and then the Solent, the race finally finishes back in Cowes.

For more information about the Sevenstar Round Britain & Ireland Race go to: www.roundbritainandireland.rorc.org

Entries and expressions of interest: https://roundbritainandireland.rorc.org/entries-interest