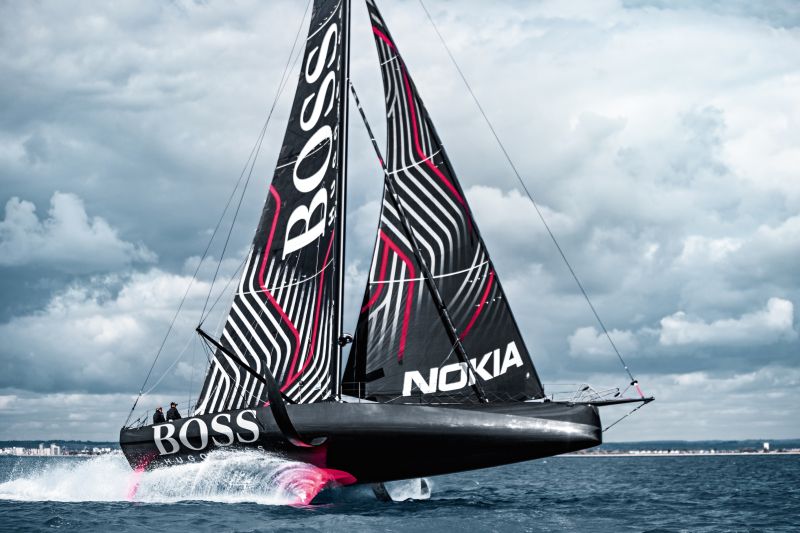 The latest generation imocas will surely deliver a new Vendée Globe record time. The British skipper of Hugo Boss, Alex Thomson, suggested on Tuesday in Les Sables d’Olonne that a new time could be “between 59 and 70 days depending on the weather”.

Armel le Cléac’h, the winner of the 2016-17 edition, took 74 days to complete his winning lap of the planet. Since the last Vendée Globe, speeds on all points of sail have increased thanks to major innovations in three main areas: foils, data, and skippers' safety.

“The obvious evolution of foils is in their size. Four years ago we were just in the early stages of these new appendages. But the surface areas have changed a lot. In the end it is logical that, as with every Vendée Globe cycle, speeds increase and so everything progresses. Autopilots, data sensors and closed cockpits, everything is targeted at delivering or living with more speed. But at these speeds, the boats are transmitting big slams and shocks and the skippers have to adapt to this extreme level of discomfort, ” explains Armel le Cléach.

Foils are developed now to a fourth generation lifting the hulls to “fly” in as little as 12 knots of wind. And since the last edition, the IMOCA class has also allowed the foil to now rotate up to five degrees: in the horizontal plane. “This is a major change to go faster upwind which was not the case before,” emphasizes Antoine Mermod, President of the IMOCA class.

Sensors for reliability, safety and performance

Fiber optic sensors have been installed on all elements that are under stress to transmit vital information to the skipper’s data centre. Sébastien Josse, who works with Nicolas Troussel (Corum L’épargne), explains it clearly: “The real secret of success on this race is the skipper setting his or her level, the ‘cursor’ in the right place. Maintaining high average speeds over a long time while staying within accurately measured chosen limits is now possible because of the sensors. Thanks to the fibre optics, the skipper knows the dynamic loads instantly and for example the deformations of the foil or the slamming loads on the hull. Nothing is left to chance, the teams are getting more and more sophisticated. On board foilers, the Vendée Globe is now as much about rapid data collections and processing as it is about sail and foil shapes.”

On board Hugo Boss, 350 sensors are distributed throughout the boat, from the rudders to the hull, including the rigging and foils. Knowing that alarms are triggered if the thresholds are reached, especially where rig loads are concerned. The one-design rigs on all the modern foiling IMOCAs are considered to be the weak link, by design, which limit the righting moment power which can be utilised.

Data collection, processing, machine learning along with advanced algorithms has made it possible to significantly develop the pilots. For a long time now the skipper has hand-steered much less than the pilot but there have been significant advances on this 2020 edition. Thanks to the sensors, the autopilots understand the boat's movements, detect yaw, pitch and roll.

As the speed of the boats has increased considerably, the way of sailing has changed: the pilot now manages the course, keeping the apparent wind angle and speed more constant and has learned to anticipate what the boat needs to maintain this optimum speed and angle, taking care of keeping the boat in flight, while the skipper concentrates on the adjustments. A new application of advanced artificial intelligence makes the level of work and interaction required – trimming sails and foils – by the skipper manageable rather than impossible.

Might the image of the weather-beaten, salt-encrusted race finisher be a thing of the past? The fast foiling skipper will now come ashore having spent most of their time fully protected, spending much more time ‘indoors’ than on deck. “Alex Thomson has gone to the extreme of this concept by having the living and working area inside. He watches the sails and the sea on screens thanks to a battery of on-board cameras. There is no real feeling of wind and spray anymore. It’s quite disturbing though!” considers Yann Eliès, winner of the last Transat Jacques Vabre with Charlie Dalin on Apivia and who came fifth place in the Vendée Globe in 2016.

In the area of safety, several systems have been developed to reduce the chances of hitting UFOs (unidentified floating objects) or cetaceans which have, over the years, caused many breakages and retirements. Oscar is a box installed at the top of the mast comprising three cameras, two of which are thermal cameras linked to an advanced artificial intelligence programme, making it possible to detect an object measuring from 4 to 150m up to 600m in front of the boat. On this ninth edition of the Vendée Globe, 18 IMOCAs are equipped with it.

The pinger system, a whale repellent, is in the process of being developed for ocean racing. Only three skippers have it on the keels of their boat. And on-board communications have further improved with new, more reliable antennas and above all better packages. Contact with land is therefore easier even if some don’t wish to use it much.

Sleep and energy levels are measured and optimised

At these higher than ever speeds the skipper's sleep and physical condition are linked to sustained levels of performance. Thomas Ruyant has a belt which constantly collects data such as his pulse and heart rate during the race. The objective is to find a measure which reveals the level of fatigue and the need for recovery. Similarly, Alex Thomson uses portable devices and sensors to analyze his physical and mental state in real time, as others do, trying to ensure the skipper does not drop into the mental and physical red zone when performance slumps, mistakes happen and decision making is compromised.

Ireland’s Marcus Hutchinson is the team manager for Thomas Ruyant’s LinkedOut. As a naval architect turned project manager he has huge experience in the IMOCA class, not least running two campaigns on the last race. At four days before the start of the ninth Vendée Globe he gives us an insight into what he thinks we might see:

What will the shape of this race be, will we see many more different angles sailed and speed variations among the top boats?

We know Charal and Apivia because we (LinkedOut) have sailed against them. But we don’t know L’Occitane and Arkea Paprec because no one has really sailed against them for very long. No-one has lined up against Corum and of course we have all really only had a little bit of time against Hugo Boss at the start of the Transat Jacques Vabre, which was not really representative I don’t think. It is clear as day that if there are that many different foil packages and that many different hulls and sail packages everyone is going to have their angles, and every boat will have its day. The key is who will be the best all-rounder ! That will get down to who will be able to keep the average speeds up high as long as possible. There is nothing secret here. The guy with the fewest weaknesses is the guy who is going to make it. But we don’t know who that is.

But with the cancellation of the two Transatlantics and Covid lockdowns, there has been a distinct lack of sailing time for some of the more recently launched projects?

We don’t know how much more there is to come from our boat. For example, at the start of the Transat Jacques Vabre when Antoine (Koch) and Thomas took the boat, ten days later near the finish they were sailing the boat in a completely different way. They learned so much. And so with our V2 foils which we have only had in since early September, and we have not done that much more sailing since. We know that they are more stable and are better but don’t have all the angles and the tweaks. It will be a lot more stable ride.

It’s hard not to think there might be reliability issues with these very new, less tested boats?

In terms of reliability there is no direct relationship other than time on the water.

But would you expect the usual attrition rate among these new boats, say 50%?

That is just statistics. The start looks reasonable, upwind, light and relatively flat water to start with and then some breeze at the corner, then it is very quickly into the classic regime. And so they will not be very challenged until they are in the South Atlantic in reality. That is a good thing in that it lets the skippers get into it,  but it means all the boats should have gone quite a long way before they have any issues.

It would be horrible to have a windy start and have boats coming straight back with issues. There are a lot of good, well prepared boats and good skippers out there but this is a mechanical sport. It is not just about boats failing it is about skippers not knowing their boats well enough, not knowing their limits and letting situations get out of control, or not being aware of one little breakdown which leads to something else.

The last two editions have been two-boat races by half way through the Southern Ocean – anything you can see that suggests this might turn out to be the same?

It is impossible to say. It really is. I would like to think not. There should be four boats in the mix and three from the last generation: PRB, Sam Davies and Sea Explorer, are definitely ready to pounce. They will not be that far from the top pace.

After a while it is simply about skippers and reliability. And I don’t think we knew last time it was going to be a Banque Populaire v Hugo Boss deal. All we know is that the three who sailed the Vendée Arctique together were close together and the ones behind were very competitive. Very quickly I think there will be two or three groups. The question is whether the gaps open so much that these groups are out of touch and there will be no way back to catch up with the first groups.