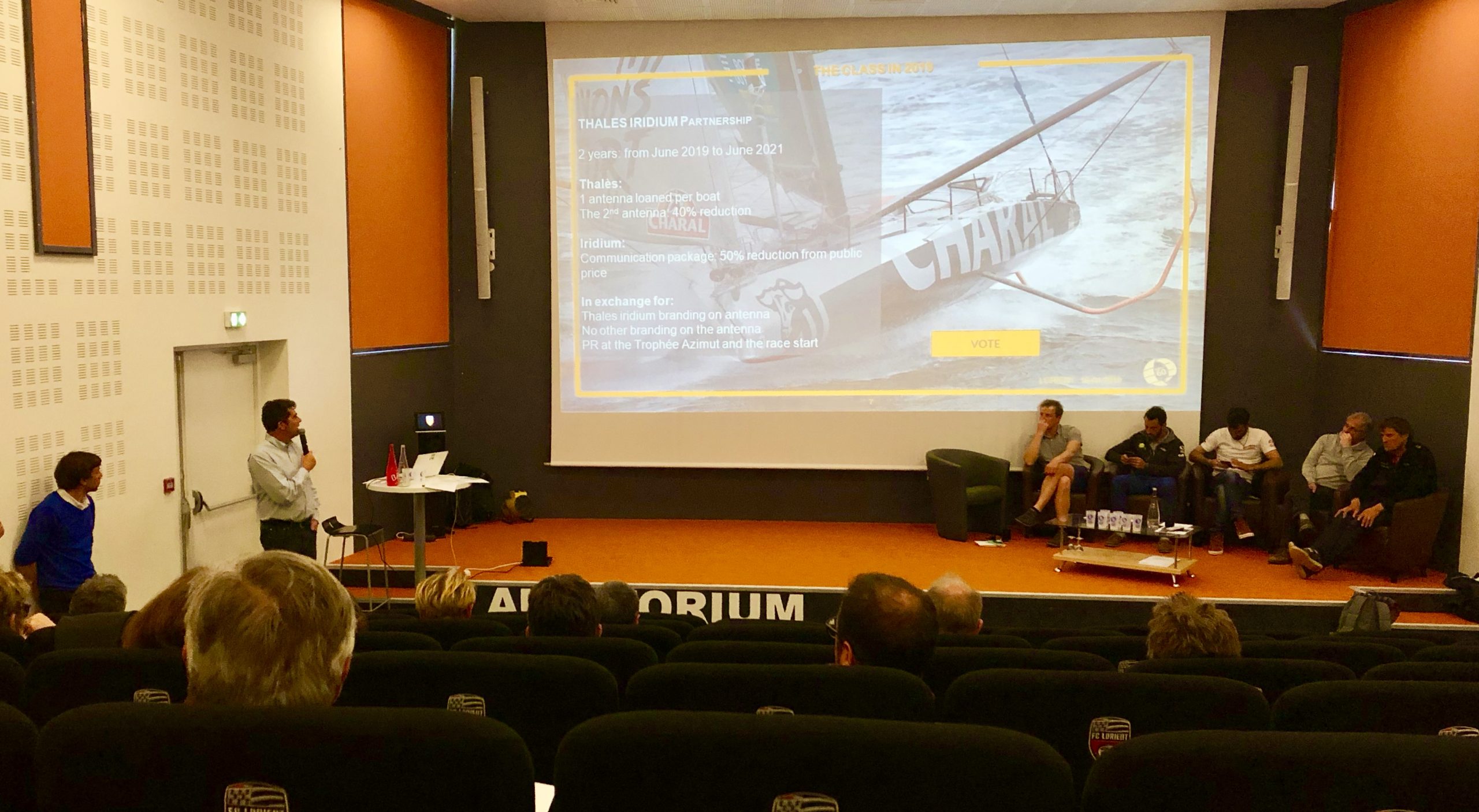 The IMOCA class Annual General Meeting was held in Lorient on Tuesday in the presence of the skippers and their representatives, who took the opportunity to look at the measures that have been taken, to talk about current matters and to look ahead.

The IMOCA class Annual General Meeting is always a key moment, where a wide range of subjects are discussed and the class is able to look at the current state of play, and determine what direction to take while sharing more technical details.

A three-part summary of the last two years
Antoine Mermod, in place now for two years, was reappointed as President of the IMOCA until 2021.

He summarised the work done by his team over the latest period. “We are putting in place measures in three areas. The first involves establishing a positive and constructive relationship with the members.

“We work with the aim of always being available, listening and sharing ideas. Everyone needs to be involved in the discussion process. We apply the same approach with our external partners, starting with race organisers.

“The second area we are working on concerns how to develop the program with the creation of the IMOCA Globe Series, the new world championship, which adds value to the races that take place between two editions of the Vendée Globe and to ensure large fleets set off in each of them.

“The class proposes two or three major events each year. This busy schedule offers our partners more regular and stronger feedback. The third area we are working on concerns the internationalisation of the class. Getting close to The Ocean Race throws the spotlight on the IMOCA class internationally. New projects are being launched outside of France and we are in the process of developing something with a huge potential.”

Rrace calendar: Five races in the Globe Series before the 2020 Vendée Globe and a rough idea for the 2021-2024 period
As planned, there are five races scheduled in the Globe Series between now and the next Vendée Globe. In 2019, there will be the Bermuda 1000 Race (which starts on 8 May), the Rolex Fastnet Race (3 August) and the Transat Jacques Vabre (27 October). 2020 will be a busy year with two solo transatlantic races (The Transat and the New York-Vendée) before the big event, the Vendée Globe, which starts from Les Sables d'Olonne on 8 November.

Always wishing to plan ahead, the IMOCA class is already thinking about ideas for the calendar for the 2021-2024 period. Antoine Mermod: “Within the next year, we will have defined the races in the circuit up to 2024. That will enable the racers to get organised and offer their sponsors the opportunity to continue their partnership after the solo round the world race.”

The IMOCA skippers, ambassadors for sustainable development
Last year, the IMOCA class decided to support the appeal driven by the sailor, Catherine Chabaud, to promote the Ocean as a common good for mankind (www.OceanAsCommon.org).

In 2019, the class is continuing its support and shifting up a gear by offering a program based around sustainable development. Wishing to preserve the natural environment in which they sail and directly witnessing the worsening situation for the oceans, the sailors are getting involved, as we see with Paul Meilhat.

“We must be exemplary and lead the way in this major debate about the future of our planet, without preaching in a patronising way,” Meilhat explained.

“Firms increasingly wish to represent this change, and we must work with them in this movement. Many IMOCA skippers are already committed with educational and scientific programs.

“Facing this challenge that concerns us all, we need to act together, discuss what to do with each other and with organisers. We will be putting in place some concrete measures to limit the environmental impact and make people who follow us aware of the problem.”

Antoine Mermod added that the class wishes to move quickly towards zero emission boats, which are self- sufficient in their energy production. “It may even become a rule in2021 for The Ocean Race. The technical committee is seriously thinking about that,” he revealed.

More than thirty IMOCAs at the start of the 2020 Vendée Globe?
There was a lot of fruitful discussion about the selection system for the next Vendée Globe. We should add that according to the Notice of Race, if more than 30 candidates fulfil the conditions for registering for the solo round the world race, the skippers chosen will be those who have sailed the biggest number of miles in races, included in the Globe Series calendar.

Based on current predictions, there could be between 30 and 35 candidates hoping to compete in the 2020 Vendée Globe. Because some teams fear that they will not be chosen to be there at the start, Antoine Mermod and Jacques Caraës, the Vendée Globe Race Director, say they are monitoring the situation closely with the SAEM Vendée.