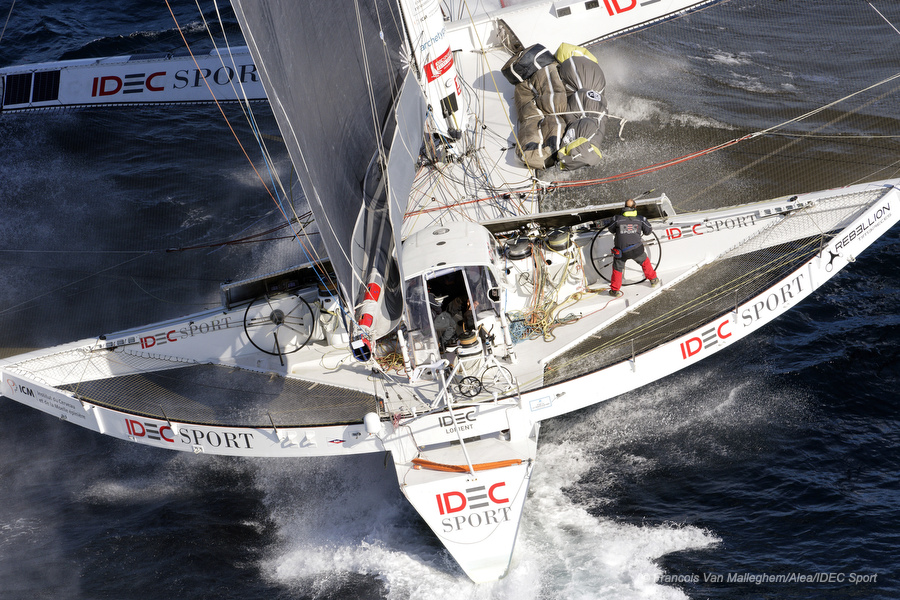 The Indian Ocean is behind them and now they face St. Helena. Francis Joyon and his crew of four were clearly pleased and relieved to return to the Atlantic yesterday morning. Christophe Houdet, Bertrand Delesne, Antoine Blouet and Corentin Joyon keep repeating that the Indian Ocean was a huge discovery for them, full of surprises, which were not always that pleasant in terms of sailing and performance. Fourteen days of sailing against the weather systems and heavy westerly swell saw the maxi trimaran exposed to big waves and a bumpy ride that sailors rarely appreciate.

The Atlantic Ocean with its long neat swell in the same direction as the wind was something they immediately recognised once past the latitude of Cape Town and was appreciated by Joyon and his lads. Now it is time for smoother sailing and the men on board can focus on getting the best performance out of the boat paying careful attention to when it it right to gybe in order to stay in the air stream that will allow them to round the famous St. Helena high via the East and North.

“It was tricky rounding the Cape,” openly admitted Francis Joyon. “The wind would suddenly strengthen and the final gybe under gennaker in strong winds was rather surprising and led us too close to the Cape. It was dark, so we only saw the lights.”

As If by magic, once past the large South African city, the Atlantic welcomed IDEC SPORT in the best way possible offering downwind sailing in the direction of the wind and the swell.

“We are enjoying this smooth sailing,” explained Francis. “The Indian Ocean is full of secrets and we didn’t discover them all. It has its moods that cannot be seen in the weather charts. Returning to the Atlantic is a bit like getting back in your own garden. Everyone is smiling. We joked around a bit this morning when we sailed to the west of Luderitz, the famous place in Namibia for trying to break speed records, where Corentin, Antoine, Christophe and Bertrand would have loved to go surfing for a moment…”

Rounding St. Helena via the North

The lead over the Tea Route record holder has continued to increase to approach 800 miles on this 17th day of racing.

“We will continue to sail downwind moving gradually away from Africa,” explained Francis. “We are trying to round the high via the North, hoping to pick up the SE’ly trade winds on a route to the west of the Doldrums, which seem to have stretched right out. Everything can change very quickly between now and when we cross the Equator.”

Still remaining attentive to how the boat is being sailed, her performance and the condition of the men on board, Joyon is making the most of this amazing voyage.

“Just after the Cape, we saw a huge pod of dolphins, maybe 200 or 300, who were enjoying themselves in the wake of the boat. There were a lot of different types of birds in the sky. In the distance, we spotted a few large mammals. In spite of our curiosity, we kept well away from them.”

“Curiously, we are in no hurry to return. Personally I am making the most of every second of this voyage. We are privileged to be sailing in very quiet waters in some fascinating seascapes. Life on board is like a dream. The atmosphere is very friendly and we’re all pulling together and looking after each other. Francis is keeping an eye on the squalls and is always ready to intervene, as he always remains focused on the performance of the boat.

“We are taking care of the boat. Our gybes are being done as smoothly and painlessly as possible. The weather is dull today, so we are looking forward to some sunshine. We are in perfect physical shape and well rested. We are finishing the second of the three bags of “nice” food. We’re all looking forward to seeing what is in the final bag. After that, it will be freeze-dried stuff. At that point we may be in more of a hurry to get home.”