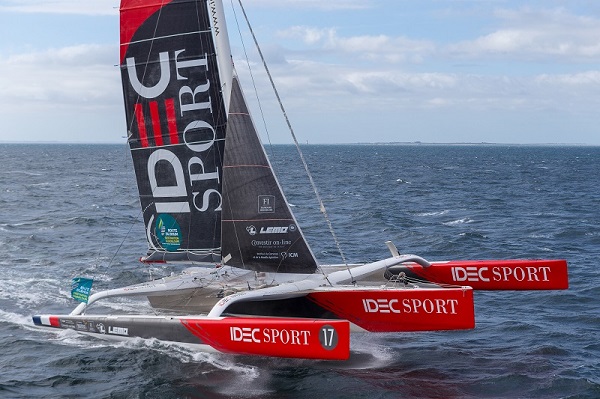 The IDEC SPORT maxi trimaran arrived back in her home port of La Trinité-sur-Mer yesterday morning after a quick journey to the Mediterranean and back. Francis Joyon has been carrying out public relations work in Cagliari (Sardinia), showing off his maxi-trimaran, which won the Route du Rhum and the Jules Verne Trophy. Sixty clients and friends of the IDEC Group were able to see what she felt like when sailing and discover the magic of the giant multihull.

Joyon, with the support of a crew of just three, was won over by the charms and mysteries of the Mediterranean throughout the 2500 miles during this quick sailing trip via Gibraltar. The weather was particularly fine and appealing at the start of the summer, with the sea repeatedly offering the men aboard IDEC SPORT the rare and magical sight of dolphins, pilot whales and other types of whales.

“We took advantage of a weather opportunity, which looked like disappearing after Gibraltar to head home very quickly,” said Joyon, who was pleased with the work they accomplished and was still amazed by the magical coast and waters around Sardinia. “This was a very quick trip there and back, as the fine weather in the Mediterranean enabled us to carry out three trips in one day with IDEC group guests, who were all delighted to discover the IDEC SPORT maxi-trimaran.

“We were given a very kind reception, but didn’t have much time to enjoy Cagliari. Some strong winds were moving in towards the coast of Portugal and I was afraid they would prevent us from sailing back up to Brittany. So, we set off again very quickly once the trips were over for the guests. We had some rough conditions after Gibraltar with three days of upwind sailing in strong winds. We got through without any problems, although it was very tiring with three-hour watches.”

The simple enjoyment of being at sea

Enjoying simply being at sea, Francis took full advantage of the Mediterranean, which fascinates him. “The wind doesn’t churn up the sea in the same way as elsewhere in the Mediterranean,” he stressed. “Analysing the weather is complicated and it all changes very quickly, sometimes completely. It’s very interesting to sail there. You’re always learning new things.”

Another reason why he was pleased and an important one for Francis, who is used to solo sailing, was his successful role as captain of a crew that really pulled together. He was particularly pleased with the excellent team spirit of what was as usual a short-handed crew.

“We set off with four of us aboard with Christophe Houdet, my old friend whom I was pleased to see back again at the helm of IDEC SPORT. Antoine Blouet and my son, Corentin made up the rest of the crew. Corentin is really getting a taste for offshore sailing now. I think he is dreaming of a career as a sailor. I’m trying to put him off, but he is hooked (laughs). Our Boat Captain Bertrand Delesne was supposed to meet up with us in Sardinia, but a happy event in his family prevented him from joining us. Consequently, it was a local lad, Gaetano Mura, a Mini racer and an accomplished round the world sailor, who joined us in Cagliari, so we were able to talk a lot about the mysteries of his island.”

A quiet summer before the ASIAN TOUR

IDEC SPORT will be having a quiet summer now. Francis and his crew will be getting some rest after this long Mediterranean voyage and then gradually preparing for the major events that lie ahead, with in particular the new record–breaking programme in Asia this autumn. The IDEC SPORT ASIAN TOUR will be another opportunity to discover and explore new horizons.