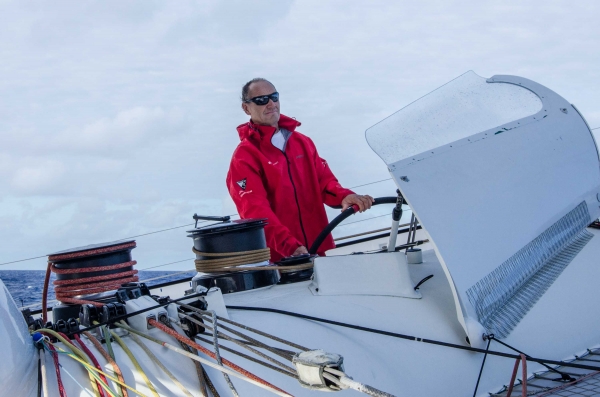 After a favourable North Atlantic, the Southern Hemisphere is proving to be more complicated. That is however what Francis Joyon and his crew of five were expecting when they set out from Brest on this attempt to grab the outright round the world record, the Jules Verne Trophy. Their goal of getting to the Equator in record time in just over five days was achieved. Now they have to face the huge, sleepy St Helena high, which determines what happens in the South Atlantic.

The toll was high this weekend for IDEC SPORT trying to make her way south to take advantage of the series of low pressure areas moving away from Argentina. Her lead, which was achieved in the first few days of the voyage, disappeared, but this has not affected the state of mind of the crew, which is trying to make the most of the complicated situation on the edge of the High.
We will only see the final outcome once they have reached the longitude of the Cape of Good Hope at the tip of South Africa in just over five days from now. Francis Joyon and his troops have explained they are trying to keep the cost of this weather down to a minimum as they race against their virtual rival, Banque Populaire V, the holder of the Jules Verne Trophy for the past four years. With Loïc Peyron as skipper they set an extraordinary time for this stretch.
Weaving their way around the High
“We have just gybed, as we sailed quickly during the night and got close to the High. We’re moving back a bit towards the west to get some more wind, before diving south again.” That is how Francis Joyon summed up the problem at the start of this second week of racing around the world.
The St. Helena High stretches its tentacles right out to the west, thus offering just a light easterly air stream to the IDEC SPORT maxi trimaran. While the current record-holder galloped through this stretch way off to the west, IDEC SPORT is weaving in and out in 15 knots of wind.
A low is building down around Argentina, and Joyon and his men are watching it closely, as they are determined to grab this fast track towards the south of the continent of Africa. This requires the utmost caution, as they risk burning their wings, if they get too close to the High and its associated calm patches.
Busy focusing on what is one of the trickiest parts of the round the world voyage, Joyon, Pella, Herrmann, Stamm, Gahinet and Surtel are trying to limit the losses by sailing under full mainsail and big gennaker in order to push forward in winds that are too light for their tastes: “We knew from the start that we would be ahead at the Equator, but that we could be behind at the Cape of Good Hope,” explained Francis Joyon, clearly not crying over spilt milk, but remaining focused as they face these difficulties between 10 and 20 degrees south. That is what happened, but was slightly worse than expected.
“Our aim is to not be too far behind at the Cape of Good Hope, as Banque Populaire V set an incredible time during this section of the voyage. We are weaving around the area of high pressure today without getting much speed up. This is a tricky day we have to deal with after a great Sunday, where we were able to dart southwards. It was a gift from the gods for Bernard’s birthday.”
An exceptional team adventure
Under brilliant sunshine and clear skies and on slight seas, Joyon and his men are enjoying an exceptional team adventure. Coming from various backgrounds, such as the Mini 6.50, Figaro, Class40 and Imoca circuits, the crew of IDEC SPORT is getting to know each other and discover their diversity each day.
“We find out more about each other every day,” stressed Francis, “We have all come together and are happy together in spite of some tricky moments. The watch system means we change over quite often out on deck. We all work on every area of the boat and it’s enjoyable getting to know each other.”
The Catalan sailor, Alex Pella added, “There’s a great atmosphere in the crew. Francis is very easy to work with, remaining incredibly calm and friendly and then, there is his huge experience. I’m pleased to be here with him; I’m learning a lot. There is a bit of a competition developing between watches. That is great for the boat and very encouraging. We spend 90 minutes trimming preparing the boat before taking the helm understanding perfectly how the boat is set up. We can also see the numbers and how well the previous helmsman has done and we try to do better. Personally, I take over after Bernard (Stamm). So he really makes me work hard (laughs).”
Spindrift 2
Setting off half an hour later than IDEC SPORT, the fully-crewed Spindrift 2 is maintaining her lead against the old record but is also in the grip of the Dt Helena high. Here is the report:
After the speed of the North Atlantic, Spindrift 2’s crew have had to show some patience since entering the Southern hemisphere. The area of the St Helena High offers dreamy temperatures and starry nights, but these are a quite different kind of comfort from the ones those chasing records look out for. The slowdown along the north-east coast of Brazil was visible on the forecasts and is now in the wake of the trimaran but, crucially, their lead on the record has obviously melted.
Now level with Porte Alegre, with an average speed of 23 knots over the last 24 hours, the trimaran keeps making good progress and the crew gybed at midday in order to stay with the wind on the edge of the anticyclone. At the chart table as on deck, all eyes are on the cold front, right in front of them, that they need to hook onto to finally get on the low pressure train currently at the Buenos Aires South station. It would allow them to settle in on the Deep South mainline, but the situation is not simple and the clock is ticking. They have to get there on time… we will find out if they have tonight.