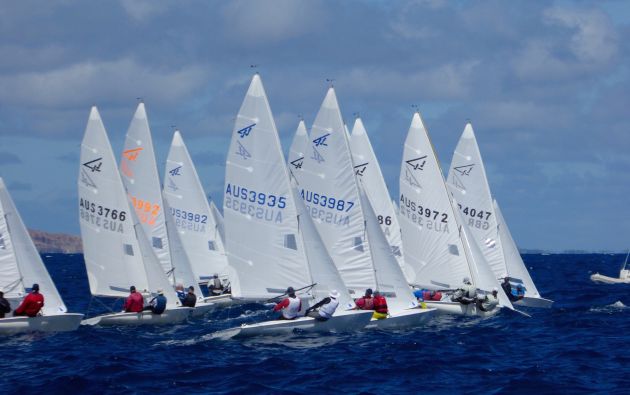 The start of the Flying Fifteen invitational race in Esperance. Photo Jonny Fullerton.

A mostly sunny day with a moderate breeze of 12 – 15 knots and relatively flat seas (according to locals, they are described as ripples!) to others they are waves!.

A slightly flustered race committee boat skipper (Kiwi) had a bad start to the day turning the start boat key to the sound of silence. After a short delay, a number of jump leads and some burly local help the committee boat was able to get out to the course for an on time start.

After one general recall, race officer John Taylor (JT) raised a U flag which seemed to do the trick with a big sag in the middle of the start line for the second go. The course was a windward/leeward followed by a triangle and an upwind to the finish providing a range of sailing angles and a number of place changes throughout the fleet.

However Nick and Janet Jerwood sailing Ineffable got a good start and tacked into an early lead at the top mark. The South of Perth YC sailors extended their lead on every leg to lead by a country mile by the last leg to the finish. They finished just under a minute ahead of the chasing pack.

“We got a good start and took a few shifts off the line, got ahead and managed to stay there so we were quite fortunate with a comfortable race after a good start.”  Nick Jerwood

Philippa Packer and Dean McAullay sailing (Absolutely Ffabulous) worked their way into second place with Philippa letting out a (woop) of satisfaction as they crossed the line but the fight for third was only decided in the last few tacks. Places 3 – 6 were split by 10 seconds. The (Glamour Buoys) Greg Leaversush and Peter Barblett crossed the distance of a dental floss ahead of fourth placed Greg Tonnison and Mark Lovelady (Spot the Difference) with Ron Packer and Steve Ward (Affrodisiac) finishing fifth.

Nick Jerwood after racing at the bar: We got down to Esperance a couple of days early to practice and the weather was quite harsh but after that we got two good days of sailing.”

“We are fairly comfortable with most breezes but obviously we might struggle against the big guys if it gets above 25kts.

The rest of the fleet can only pray it blows!

The whole fleet enjoyed a big New Years Eve bash overlooking the tranquil waters of Esperance Bay and an early day off to recover on New Years Day. The first days racing is scheduled for a 1300hrs (local time) start on Monday 2nd January with a long range forecast of increasing winds and a bit more bumpy seas (or larger ripples as they say at EBYC)!

There is a full schedule of social events for friends and families. More details are available from: www.ebyc.com.au and www.ffiwa.com and the Facebook site: www.facebook.com/FFIWA