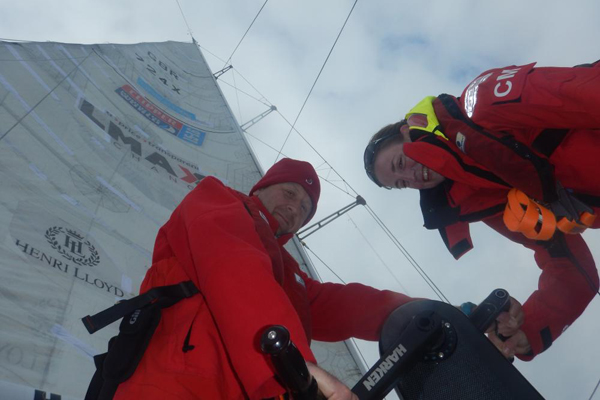 For the first time in the PSP Logistics Panama Cup IchorCoal has taken the lead in this tenth race of fourteen in the global series. Several days ago, the South-African sponsored entry departed from the rest of the fleet, heading much further west than its competitors to pick up stronger winds and the gamble has paid off. Now back in with the rest of the pack as they head a south-easterly direction, Skipper Rich Gould and his crew have a narrow lead of 1.83 nautical miles over Derry~Londonderry~Doire in second.

“From the bottom to the top! What a day, starting off in twelfth and ending up near the front end of the pack, it looks like the offshore route that we committed to early on has paid off for now. We just have to keep it up for another 2800 and something nautical miles.  A massive well done to the crew for all the hard work that they have done to get us here,” reports Skipper Rich in his daily report.

“We’re currently screaming downwind with the heavyweight spinnaker up and have a visual of Derry~Londonderry~Doire on our Starboard quarter, it’s all to play for,” he added.

There have been big positional changes across the fleet in the last 24 hours with Unicef moving up to third, ClipperTelemed+ is now fourth and Qingdao remains in fifth place. Yesterday’s leader LMAX Exchange is now sixth and remains the closest inshore team, while Garmin, now in seventh, has joined the rest of the fleet further offshore.

“At last the winds have filled in for us and we are back up to speed. The swells arrived first and that made helming pretty difficult. Thankfully the wind soon followed, making it slightly easier to keep the kite flying,” says Garmin Skipper Ash Skett.

He goes on to explain further: “The cause of the light stuff over the last few days was a weak low pressure which should have shifted off a while ago. Unfortunately it was moving inshore much slower than the forecast predicted and left us stuck in its windless centre for a while. Anyway that is all history now and today we found ourselves right back in the middle of the tight pack with some of the other boats occasionally popping up on AIS (Automatic Identification System).”

As the most westerly boats, Mission Performance and Da Nang – Viet Nam find themselves in eleventh and twelfth place on the Race Viewer, but they are also further south than their rivals so could still hold an advantage.

“Today has been a fast day. We have been on the losing gybe so our placing does not look good. We have had Mission Performance as our neighbours all day, it is nice to have someone to keep us honest,” reports Da Nang – Viet Nam Skipper Wendo Tuck. “I think it was a Mexican stand-off to see who would gybe first, I wanted them to so we wouldn’t have an issue if we needed to duck them as we would have been on port to their starboard. Anyway they gybed so we gybed, we are now on the making leg, so it feels a lot better.”

Skipper Wendo continues: “We have been under kite for ages now and it is quite challenging to say the least. The wind is a fair amount more than what was forecast but we are going fast, so fingers crossed it all stays well.”

More changes certainly lie ahead when the teams will have to negotiate changing weather systems as explained to the Skippers by Clipper Race Meteorologist Simon Rowell in his daily weather forecast for the fleet.

“You are all charging happily south-east right now, and the remnants of that low should disappear over land over the next 24 hours. Then you’re left with the ridge of high pressure and its interaction with the land, and there looks to be an interesting 2-3 days coming up linking areas of pressure together to keep the speed up as you head towards the south end of Baja California.  Further south the ITCZ (Inter Tropical Convergence Zone) is quite active, with several large clusters of convection, but so far nothing that looks as if it could develop into more than a normal tropical low.”

As the tension continues to build in the PSP Logistics Panama Cup, stay tuned to the Race Viewer to find out what happens next.

*All positions correct as of 0800 UTC