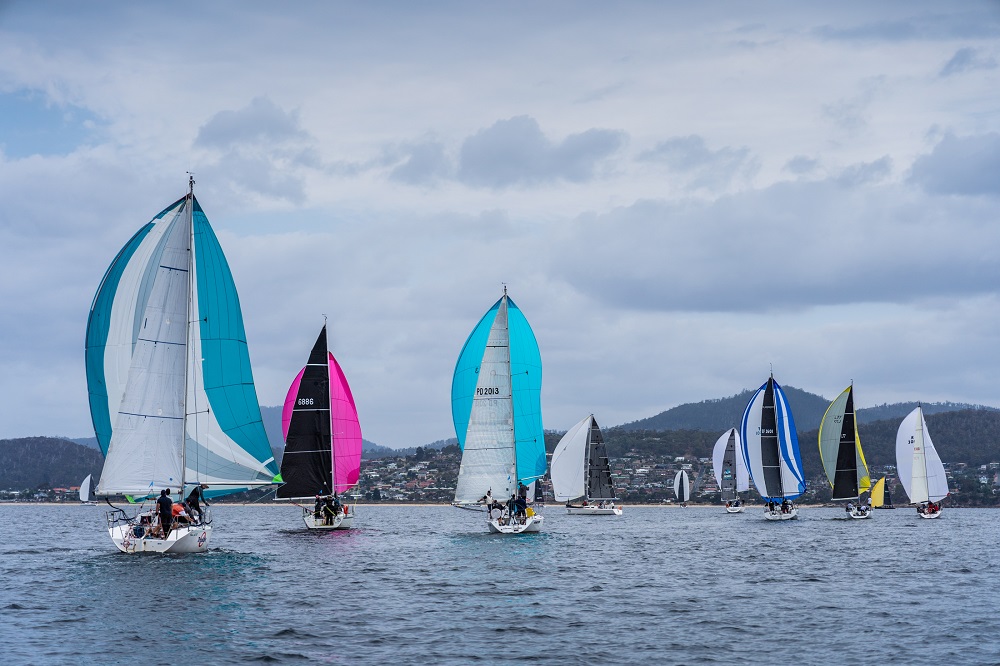 Day 1 of the Australian Yachting Championships, hosted by the Royal Yacht Club of Tasmania (RYCT) kicked off at 10.30am today on the River Derwent as planned, but in a very light 5-7 knot breeze.

Bob Steel and Craig Neil’s Quest (NSW), a TP52 that has twice won the Sydney Hobart, is in second place, with best results of second in Race 1 and third in Race 2. Zen (Gordon Ketelbey, NSW), a third TP52 and winner of yesterday’s King of the Derwent Race, is third overall.

Aboard Division A yacht, Celestial (NSW), owner Sam Haynes revealed a couple of secret weapons on board his TP52. “A couple of Sydney Hobart guys got off and Alby Pratt (from North Sails, a Championship sponsor) and Cameron Miles replaced them. They are pretty handy,” Haynes said.

Like others who have just done the Sydney Hobart, of which Royal Yacht Club of Tasmania is the finishing partner, the CYCA yachtsman commented: “We’ve taken weight out of the boat for the Championships – around 100 kilos and different sails – and got a new IRC certificate.

“Thanks go to the organisers,” Haynes added, “They’re doing a great job.”

In Division B, a local boat in Greg Prescott’s Farr 40, 2 Unlimited, is in the top spot with a pair of wins on his scorecard. In second place is Keiran Mulcahy’s King 40, Soozal (NSW). Mulcahy bought the boat with his wife just before Christmas and it is the talk of the town.

Mulcahy, who has his 24 year-old son sailing alongside him, commented: “It’s nice to have Patrick sailing with me. We got good starts, but I was called back twice for starting early. In Race 3, we sailed through the fleet though,” said Mulcahy, who won Race 1 and scored second and third places in Races 2 and 3 respectively.

Anthony Kirke is here from Western Australia with his Farr 40, Enterprise, also having taken part in the Sydney Hobart.

“This is the first time we’ve been in the Championships. We’re finding 2 Unlimited and Soozal, the Farr 40’s, hard to beat. We’ve got a couple of Tasmanians on board and their local knowledge will help in the Passage Race tomorrow,” Kirke admitted.

On Tasmanian Division C entry, Midnight Rambler, owner Ed Psaltis did not have the day he would have liked.

“Not enough breeze for us,” Psaltis commented. “The boat (a Sydney 36) is good, but it needs 10 knots to get going.” The philosophical yachtsman added, “It’s meant to be a hard southerly for tomorrow’s passage race. It’s meant to blow like stink. The race and those conditions will suit us.

“The committee did a great job today. They got three races in, in a mainly 6-8 knot breeze. The second race we saw 13 knots for a short time though,” Psaltis ended.

RYCT Commodore, Tracy Matthews remarked, “It was fantastic sailing today. Competitors sailed in a steady light breeze. To see our local boats on the course amongst some of the best sailors in the world is fantastic.

“To see the speed of some of the bigger boats is amazing. And we saw the sweetest spinnaker drop we’ve ever seen – on Ichi Ban – it was as smooth as silk.

“We got the three races in, with only one General Recall and a couple of individual recalls. It was tight at times at the boat end of the start, but it was a good day enjoyed by all,” the Commodore ended.

Tomorrow, the RYCT plans a passage race. The three-day Championships conclude on 5 January with windward/leeward races.