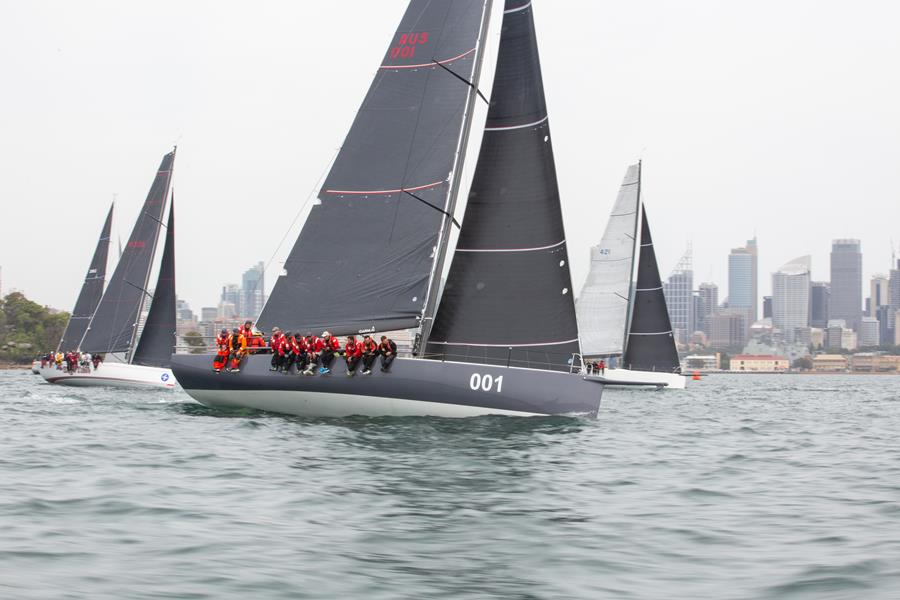 Ichi Ban shortly after the start working to keep clear air with the many other yachts to negotiate. Credit - Hamish Hardy

Matt Allen and his crew on the grand-prix racing TP52 Ichi Ban have claimed the overall win for the 2019 Blue Water Pointscore Flinders Islet Race.

After a mid-morning start in testing conditions with close, choppy swells averaging nearly two metres in height, all yachts have now crossed the finish line following a slow night with fading breeze.

Whilst finishing only 11 minutes behind the front-runners Chinese Whisper and No Limit, it was a tense wait to see if any of the remaining yachts would be able to beat their corrected time and step in to take the race win.

“It was a mixed bag of conditions out there, the run down to the islet was just beautiful, really enjoyable and fun. If you had any chink in your armour though or made a mistake it could come apart pretty quickly,” said Allen.

After exiting Sydney Harbour in fourth place on line honours, the crew were not slow to make up the ground to the front running 60 footers.

“We were just ahead of No Limit as we went around the islet. On their last gybe in they went a little bit out to sea and got a little bit more pressure which put them just in front of us for a moment but were able to pass them again coming in to the islet. They gybed about four or five lengths ahead of us then with a couple of good puffs we got around them,” said Allen.

“It was quite an amazing part of the race with the two boats, spinnakers up, headsails going up, coming in to the island doing 18 knots, a few boat lengths apart. It was pretty spectacular.”

With their heads now set for the slog back upwind to the finish line the race turned up another level with large variations in the wind strength and direction.

“We went around the islet in really good shape but then it was all on! It was really tricky on the way home. Coming up the coast there were some quite big shifts in the breeze, anywhere from the just east of north, to one point where it went in to the west and we were reaching for a bit. It even dropped to about 12 knots at one stage, so we all had to change jibs and do a big gear change,” said Allen.

“There was one big shift where it went hard left which we were on the outside of, so the guys behind us made a bit of ground up on us there. We were really happy though, the boat is going well and it was fun going around the islet first.”

ORCi saw Gordon Ketelby's TP52 Zen placed first in both overall and Division 1 ahead of a string of fellow grand-prix TP52s. Zen was the first of the 52ft yachts to exit the harbour after the start but was unable to keep the lead as they made their way down the coast and around Flinders Islet.

Full list of results can be found by clicking here.