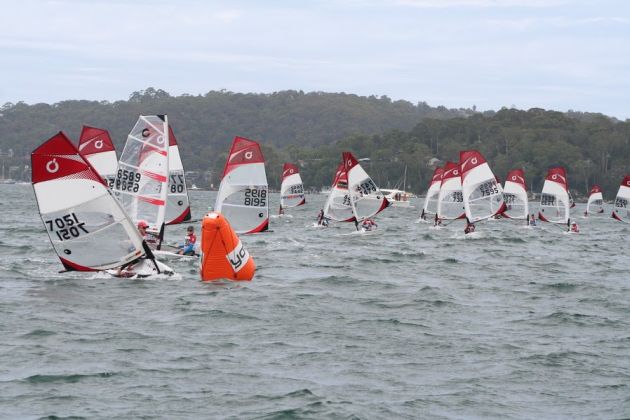 This year’s NSW O’pen Cup took to the waters of Pittwater and was held at the Royal Motor Yacht Club (www.royalmotor.com.au). The club’s facilities and organisation were outstanding, and staff extremely accommodating.

A record 48 competitors entered the event, which made for a great spectacle. The Silver fleet was noticeable bigger than previous years and it was great to so many sailors competing in their first regatta ever. The Gold fleet saw talent like never before and a tremendous amount of skill on show, in fact in one race there was only 2 minutes between first place and last, that’s close!

The stand out performance of the weekend went to Noah Quinlan from Avalon Sailing Club. Noah only learnt to sail 8 weeks ago and has been training hard with his dad. All the hard work paid off as he finished 2nd in the Silver fleet. Well done Noah.

Kristen Wadley showed she is still the sailor to beat as she comfortably took out the title over the weekend and is backed to be the favorite for the up and coming WORLD O’PEN CUP (www.worldopencup.com.au) this Christmas period. The QLD sailors who made the trip down dominated the top of the fleet and made for some awesome spectating.

The on water race team made light work of the weekend, getting in 9 races for each fleet. Col Chidgeway (RO) showed his class and experience keeping the racing rolling with military precision. David Tallis and Mel Yeomans kept the Gold fleet honest as the on water judges for the event with only a few incidents.

All in all the regatta was a huge success on and off the water. A huge thank you goes out to all those involved over the weekend and we can’t wait for the next one!