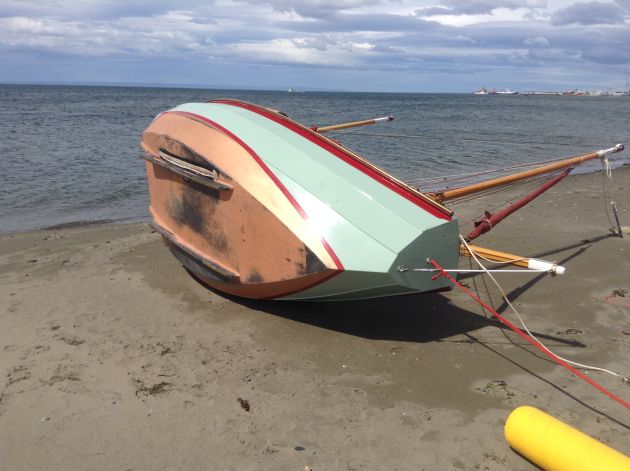 The boat on the beach after the drama.

Howard Rice is attempting to sail around Cape Horn in an 11ft 3in pram dinghy. Recently he found the boat had dragged her anchor and been washed ashore. This is the dramatic story of his attempts to get her off the beach so he can resume his unusual quest.

Seven days ago I awoke at 3:30 am anchored offshore in the Strait of Magellan to prepare for departure south from my location just north of Punta Arenas. I was finally seeing a small weather window of opportunity as January has likely hit the record books here as one of the windiest ever.

My friend at the Armada has repeatedly said the January winds are very unusual and more like the heavy September winds. He and others at the Armada attribute the high winds to climate change, perhaps they are right. It has been blowing like crazy for days and so I have waited. While possibly frustrating I see the waiting a bit differently. It is an opportunity to experience more of Chile and Chileans and to work on the book I am writing.

This is voyaging in the classic sense. Voyaging is not just about the wilderness of the sea and remote landscapes it is also about strategy, patience and immersion in another culture. I am having a positive and dare I say fantastic small boat voyage by any measure although I really am longing to begin sailing.

Prudent seamanship when working small boats is to be patient. The term “delay” really isn’t in my vocabulary but seems to resonate with some who have a notion I was setting out on a particular date, a date I am not aware of nor have ever stated…..just for the record;-)

As a sailor I know the danger of sailing by a clock or calendar, one factor that often gets sailors in trouble. So in closing I am learning, interacting and I enjoying my voyage as it is. Patagonian Chile is fascinating, of course I’d rather be underway but sure wouldn’t want to go just to be gone.

A Day of Days

So this said I was up early and put away sleeping gear, opened the foot well, donned boots and set about making a hot breakfast. The morning was brisk at about 42 degrees F. The wind had blown most of the night at about 16 knots. I had wisely chosen to follow natures lead and in so doing had managed a soporific sleep anchored between two kelp beds. Being here and being patient has allowed time between preparation tasks to observe and through these observations learn. It has been some time since I was last sailing these waters and I knew through observation I would soon come into synch with my surroundings.

For several days since escaping the estuary I had swung at anchor and noted the patterns of the sea birds at night. There are two long kelp beds perpendicular to shore and each night the birds bath in the estuary fluttering, splashing, dipping and diving all the while squawking like mad and then take places lined up in the kelp beds for the night. The kelp dampens breaking waves and so I followed suit and anchored amongst but away from them and managed restful nights. I may be well suited to sleeping on boats as I am a light sleeper, which serves me well as any odd movement awakens me.

So up early, back anchored with my big hook on shore I set the boat right with the exception of final battening down of some hatches. I planned to batten everything down including inflating and closing the cuddy just before setting off. After stowage and making the boat ready I sat back with a hot cup of coffee and enjoyed the early morning light watching the vapor of my breath in the frigid morning air. It was actually magical, cozy and warm.

Night time is a bit of an after thought in this part of the world with a sort of darkness, which lasts about four hours. At 7am I pulled my inflatable kayak alongside for the paddle to shore. Before setting to shore to retrieve my anchor I pulled my dry suit bag out and made ready to put it on when I returned. Sure glad I did in retrospect given what happened this day.

The Armada had been by to see me the day before asking that I contact them by VHF on departure. I had made daily required radio check ins without fail and yet had never received a confirmation reply. Therefore I was a bit nervous about my comms with the Armada. Communication is supposed to be a two-way affair. All vessels of any type entering, transiting or voyaging through Chilean waters are required to check in with lat/long daily. Failure to do so triggers an automatic search.

How could I set sail without knowing? My greatest fear was to wake one morning with a helicopter hovering overhead. So after retrieving my VHF and a few tasks on shore I noted the wind had increased to the mid twenty knot range and I felt the urgency to leave as soon as feasible in order to get south around a particular point where I could ease sheets and reach on in what I expected to be winds up to 25 knots with higher gusts. I was set to sail with reefed mizzen and spitfire jib only.

I began calling the Armada but no response. I tried numerous times and no response. My friend Juan met me at the shore and he too called and no response. Frustrated I realized I could not depart without acknowledgement and after discussing the issue with Juan decided I had no choice but to travel the 7 miles into Armada HQ and clear up the one way communication issue, which had become the norm.

So I went back to the boat changed clothes and made my way back to shore. An hour later I reached Armada HQ and was told to wait, I waited. Finally, I could wait no longer as the wind had come up and shifted direction by some degrees, I was getting very nervous and hastily made my way the 7 miles back to Southern Cross. During my trip to the Armada the wind had blown up with gusts in the mid forties at least.

I reached her location and my heart skipped a beat. I raced toward shore and there was my boat fully engulfed in surf and being pounded onto shore with the cockpit full of water, sand and seaweed. She had dragged anchor and I was not there to tend to her needs. Now she was ashore on the beach being beaten up.

I was momentarily dumb founded as I realized the scope of what was in front of me. What could I do? I had been here before at age nineteen when a rookie error caused my Cape Dory Typhoon to beach in breaking surf on Assateague island in the middle of the night in similar cold but not as windy conditions. I managed a solo self rescue then, could I do it again? I had to get over the shock and act if there was to be any way to get out of the dire situation, which at the moment looked very serious and so I did. I reached into the flooded cockpit and grabbed my dry suit, stripped off coat and shoes and got on with it.

Go to http://smallcraftadvisor.com/our-blog/?p=4804 for the rest of this fascinating tale.