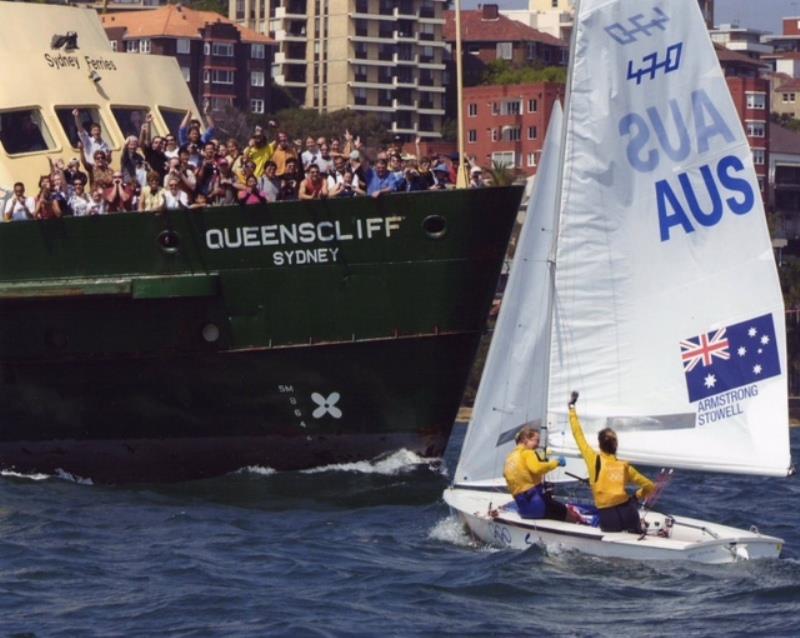 Jenni Bonnitcha worked for the on-shore team at the sailing event at the Sydney 2000 Olympic Games. Pic - Australian Sailing Team

Former Australian Laser sailor and sailing coach Jenni Bonnitcha knows about the blood, sweat and tears that goes into the preparation for and execution of the biggest show on Earth – the Olympic Games.

Bonnitcha played a crucial role behind the scenes in the sailing events at the Sydney 2000 Olympics. She also ran the Cruising Yacht Club of Australia’s (CYCA) Youth Academy in the early 2000s and oversaw the development of many young and upcoming Australian sailors, including the 470 Olympic sailor Will Ryan (Ryan crews for Mat Belcher in the 470 class).

From her home in Sydney, Bonnitcha is on the edge of her seat as the Australian sailors rise to the challenge in Tokyo.

Tell me about your involvement with the Sydney 2000 Olympics?

My role was to train nearly 200 volunteers whose job was to help out with the launch and retrieval of boats. We had to fit all the boats into the park at Darling Point, next to the Royal Australian Navy Sailing Association (RANSA).

I was also in charge of making sure everyone got the equipment they needed like race marks and radios. Sailing is only surpassed by athletics, in terms of quantity of equipment.

It was the best time – I felt privileged to be part of it. It was exciting, stressful at times, but generally brilliant. It was a buzz.

You’ve had an impressive sailing career, including an Olympic campaign following the Sydney 2000 Games.

They ran a Laser regatta on Sydney Harbour, and I came second to Vanessa Dudley (Dudley is a well-known Australian Laser sailor). For first and second it was a free trip to the European Championship. I was lucky enough to do that twice.

When Nicky Bethwaite started a Yngling campaign in the lead up to Athens in 2004, she contacted me. I spent 18 months overall, including three months in Europe, crewing in Nicky’s team. It was a wonderful experience even thoughI didn’t end up going to the 2004 Olympics.

What did you do following the 2000 Olympics?

Because of my work with the Olympics, I was recommended for a role at the CYCA (in Sydney’s eastern suburbs) to run the Youth Academy. And that’s when I took over the academy. I loved my time at the CYCA and had the privilege of being with some of the best sailors around.

Do you know anyone from the Australian Sailing Olympic Team?

My biggest connection is with Will Ryan, who I taught while I was at the Youth Academy.

When I was running the squad at the CYCA, the sailors had to be at the park for exercise at 7.30am every Saturday. Will was always there.

A few years into this, we had to be up at Pittwater (on Sydney’s northern beaches) for a regatta. Will had something on in the morning so I offered him a lift. I asked him where I should pick him up, and he said Riverview (St Ignatius’ College Riverview is a private boys school on Sydney’s lower north shore).

I said, “How have you been getting to sailing all this time?” And he said he would walk, then catch a bus, then another bus, then a train, then walk. He’d done that for years and never said, “Jenni, this is too much to ask of someone.” He’s just a nice person, he’s got a lovely way.

I’m also following the progress of Will’s sister Jaime Ryan in the 49erFX class. And also her skipper, Tess Lloyd, because of the comeback she made from the terrible accident on the water years ago that nearly cost her life. I applaud her on her dedication to the sport.

Do you think that Mat and Will are going to be able to turn their silver medal from Rio into gold at Tokyo?

It’s going to be really hard for them. They have had limited opportunity, like all our sailors, to do the pre-regatta events that were available to those in Europe.

I’ve got great trust in Victor Kovalenko’s (a world-renowned coach) ability to keep them focussed. But it’s a big ask to for them to get gold when they’ve been doing it on their own. They’ve been to national events but it’s not like the six months that you would spend in Europe leading into an Olympic regatta like the years before.

Do you think the lack of spectators in Tokyo will affect our sailors?

With less home crowds at Tokyo, perhaps it will give the Australian sailors an advantage because they don’t have every Japanese person in Enoshima (the location hosting the Olympic sailing) yelling and screaming at the teams. There aren’t as many people around, so it may not affect them. It might be a positive thing.

What do you think about the introduction of the mix 470s fleet at the Paris 2024 Olympics? Do you think it is the right step towards promoting equality within the sport of sailing?

Absolutely. I’d like to see complete gender balance on the water. There’s very little difference in what women and men can handle on the water these days and it is only when it is down to weight and pure strength that the difference is there, and I don’t think that should be reflected in so many classes as it is at the moment.

What do you think of the Olympic coverage?

It would be nice if sports (that aren’t so mainstream) were included in a summary, especially when sailing has won gold medals in past Olympics for Australia and it’s still not given the acclaim it deserves.

To check out the full racing calendar, see: https://olympics.com/tokyo-2020/olympic-games/en/results/sailing/olympic-schedule-and-results.htm

And to find out more about our Australian Sailing Team Tokyo representatives, see: https://www.olympics.com.au/games/tokyo-2020/team/