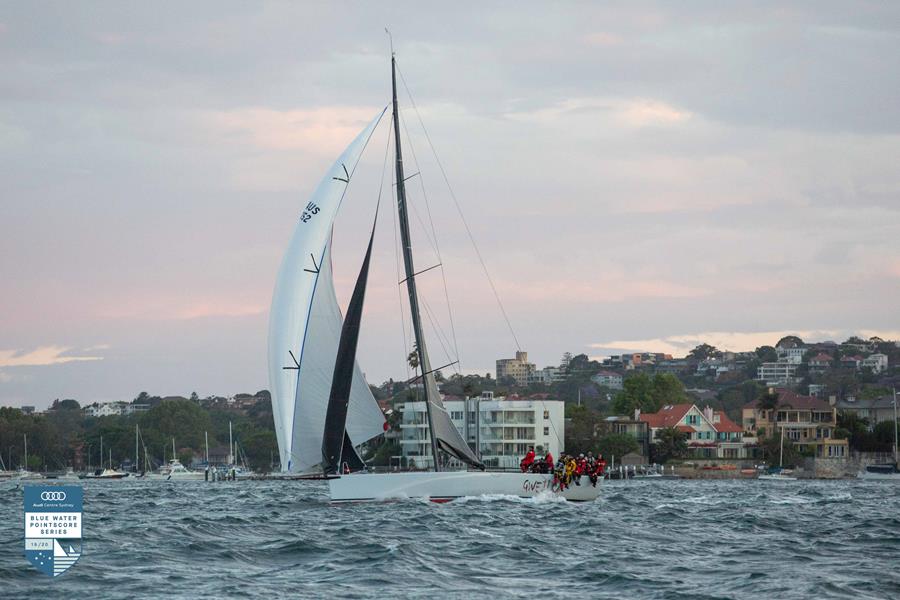 Black Jack and others toughed the blustery conditions throughout the evening, as southerly winds reached the fleet, meaning an upwind race to the finish in Rushcutters Bay. After the retirement of the other two super maxis, Wild Oats XI and InfoTrack, Harburg’s newly modified 100-footer was in the prime position for line honours.

At nearly half Black Jack’s length, Gweilo was trailed her at the start and sailed a consistent race to finish second over the line.

Skipper, Wade Morgan, commented on Gweilo’s strong performance: “It was a superb race, obviously pretty fresh; it lived up to the forecast. Starting with a reef and fractional sails in the Harbour is not something you normally do; and right on twilight!

“We had a great race; it’s the first time we had all our Hobart crew together, so we’re really rapt with our night. We kept it pretty safe and had no dramas. We thought the boat performed really well.

“It was the first time with a bit of new gear with everyone on board. All the Victorians came, which is huge, including a Tasmanian and one American.

“We had a great run up and loved it. It wasn’t quite as bad as we were expecting on the way back, so that was good!”

Variable winds throughout the day and night provided intensely tight battles for divisional placings among the remaining competitors.

Only Galaxy III remained on the course this morning at 07.15 hours while 23 yachts retired for a variety of reasons, including gear damage on InfoTrack and structural damage to Wild Oats XI.