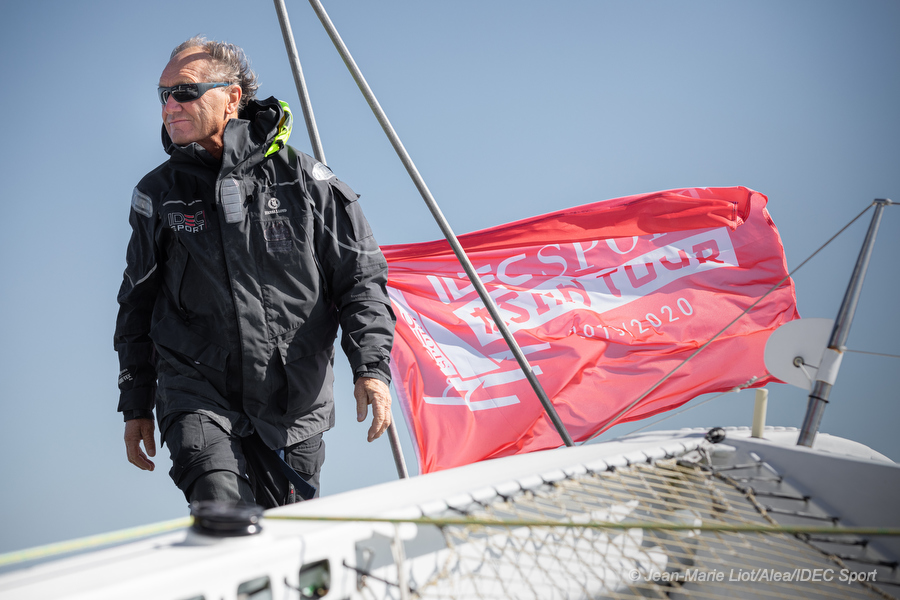 With a lead this morning of more than 770 miles over the Tea Route record holder, Francis Joyon can hope to round the symbolic mark of the Cape of Good Hope in four days time, so just under 15 days after leaving Hong Kong.

In some particularly tricky weather conditions, with the transitions between weather systems making it tough for his crew of four, Francis Joyon has traced a good trajectory across the deserted Southern Indian Ocean. The Atlantic is calling with the promise of some downwind sailing, which should be ideal to step up the pace and increase the lead over the record pace.

“We’re sailing the other way from the systems”

The damage and cyclones are now behind them. IDEC SPORT has emerged from a very tough 48 hours with a substantial lead over her virtual rival, the holder of the Tea Route record.

“We took advantage of a calm at dawn on the day before yesterday to change our mainsail halyard,” explained Joyon. “Antoine Blouet climbed to the top of the mast and 30 minutes later, we hoisted the mainsail and got back on track.”

Behind two active areas of low pressure, the maxi trimaran has moved from one system moving rapidly eastwards to another.

“We are sailing the other way from the systems,” smiled Francis. “We crossed a trough of low pressure last night with northerly winds followed by an area of calms, then very rapidly the very cold Southerly wind from the Antarctic strengthened with some strong gusts. The boat rose right up on some nasty seas.

“At the moment we are approaching the centre of the high. We only have twelve knots of wind and we are getting ready to change tack to head back down south on the starboard tack. We are being kept busy, as each time we change systems, it takes a lot of manoeuvres…”

With another low ahead of them tonight, approaching the southern tip of the continent of Africa is as tactical as ever.

“We are having to do a lot of thinking aboard the boat,” said Francis. “The whole of the crew is involved in analysing our route with the support of Christian Dumard, who is very clear in his forecasts.”

Four very tactical days before the Cape of Good Hope

Sailing into a heavy westerly swell caused by the lastest low pressure system, IDEC SPORT is slamming and at times has been forced to slow down. But Francis, Christophe (Houdet), Antoine (Blouet), Bertrand (Delesne) and Corentin (Joyon) have a clear vision of their route to the Cape of Good Hope. They are going to have to continue to adapt to the weather systems that lie ahead. They can hardly wait to get back into the Atlantic.

“We’re getting a bit fed up with sailing with the wind on the beam or upwind. We are looking forward to sailing downwind and speeding along in the South Atlantic,” admitted Corentin, the youngest crewman. “We were hoping for the trade winds in the Indian, but we didn’t get them, so have had to adapt,” stressed Francis Joyon remaining as positive as ever.

IDEC SPORT is out there alone making her way across the south of the Indian Ocean. Francis fully understands how huge the ocean is and how magnificent.

“Going through the Sunda Strait was horrible. It is a place where for 100 miles or more, the China Sea disposes of its plastic waste. We saw all sorts of junk floating around, gas containers, fridges and thousands of bits of plastic…We had to sail a long way into the Indian Ocean to find any clear waters. For a few days, we have been able to fully appreciate this wilderness. We have only spotted two liners on the AIS.

“For two days, we were lucky to be accompanied by two shy albatrosses. They had fun with us going from one side of the boat to the other behind us. It was a magical moment.”

Life on board matches the pace of the record attempt.

“The crew is happy and eating a lot,” smiled Captain Francis. “The first eleven days of the voyage allowed us to get a better idea of how much food we require. We are relieved to see that we stowed just the right amount and that we will be able to continue to eat well to the finish, in spite of our healthy appetites. We are in our fleeces and wet weather gear, but it isn’t really that cold. The temperatures are closer to what we get on summer nights in Brittany.”

“This is a great trip and a wonderful adventure. We are well ahead and can’t wait to reach the Cape of Good Hope. We have all been kept very busy over the past few days with some tricky weather patterns. Our three-hour watch system is working well. I am on watch with Christophe Houdet. We are managing to rest and recover. This was the first time I have seen albatrosses. They were fascinating to watch. We are well and truly in the wilderness here miles from nowhere. It feels strange and I quite enjoy it. It’s nice to think that there are still some unspoilt places around the planet. It’s nice to be so far ahead and there is room for us to improve on that still further.”