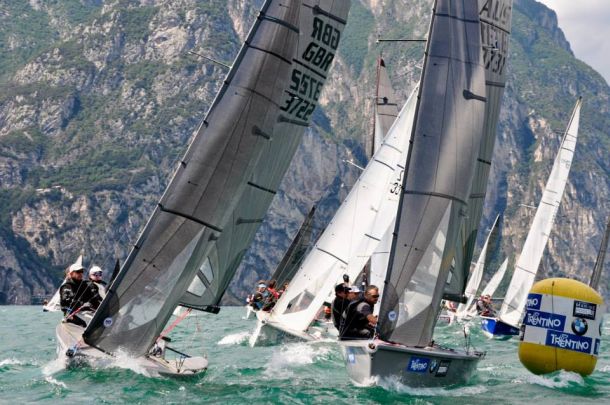 Michael Cooper competing in the Italian SB20 championships as a warm-up for the worlds. Photo supplied.

Italy’s famous sailing venue, the spectacular Lake Garda, will have a unique impact on the Cooper family from Hobart over the next four to five weeks as they represent Australia in two major world sailing championships.

Next week Michael Cooper will skipper his SB20 sports boat in the world championship being sailed from the Circulo Vela Torbole yacht club on the northern end of Lake Garda, with racing starting this coming Sunday, July 4, with an invitation race. Then, starting on July 31, his son William (13) and daughter Laura (11) will compete in the world championships for the International Cadet Dinghy at Riva, further up Lake Garda.

Cooper, a member and director of the Royal Yacht Club of Tasmania, is highly ranked among the five Australian yachts entered for the worlds following an impressive fifth overall against a fleet of 51 boats at the recent Italian national championships for the high performance SB20 class. For the worlds he will be joined by fellow RYCT members, vice commodore Matthew Johnston and David Chapman, making up the crew that finished second overall in the Australian championships in Hobart in March.

A second Tasmanian entrant will be skippered by Phil Reid, a member of the Derwent Sailing Squadron while Andrew Roberts is sailing with Victorian Robert Jeffreys, also in a new boat.

Roberts reported from Lake Garda yesterday, “It is a stunning venue, but very hot when the wind drops out. The sailing kit looks like a thermal top and shorts. The bonus is that if you run out of water you just refill your drink bottle from the lake you are sailing one.”

The Cooper siblings, William and Laura, members of Hobart’s Sandy Bay Sailing Club, are the reserve crew for the Australian national team contesting the International Cadet Dinghy worlds at Riva from July 31 to August 7 and will compete in the concurrent worlds promotional regatta.

Coach is well-known Geelong sailmaker, yachtsman and Australian Sailing + Yachting columnist Tony Bull who coached the team that won the Cadet worlds at Weymouth, England, in 2014.