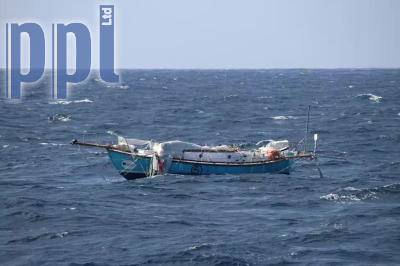 Abhilash Tomy's yacht is to be recovered by the Indian Navy. Photo PPL Agency.

The Australian frigate HMAS Ballarat will be within helicopter range of Ile de Amsterdam at first light tomorrow (Thursday) and will commence operations to pick up Gregor McGuckin, one of two Golden Globe Race skippers dismasted during a fierce storm mid-way across the South Indian Ocean last Friday.

The second skipper, Indian Naval Commander Abhilash Tomy, who sustained serious back injuries when his yacht was rolled through 360° by 15m high seas, will remain in hospital until the arrival of the Indian Navy Frigate INS Satpura on Friday, when he will be transferred by helicopter for ongoing medical treatment and return to India.

HMAS Ballarat will proceed back to Fremantle with McGuckin who remains in good health, arriving there on 2nd or 3rd of October.

Capt. Dilip Donde, Abhilash Tomy’s manager, reported today that Thuriya’s skipper can now stand and is eating and drinking, but requires complete rest. He will be evacuated from Ile  de Amsterdam on a stretcher.

Capt. Donde also announced plans to salvage Tomy’s yacht Thuriya, left drifting in the Indian Ocean when he was recovered by the crew of the French Fisheries Patrol ship Osiris on Monday. The plan is for the Indian Navy to tow Thuriya to St Paul’s Island some 40 miles north, and leave a crew to make repairs and sail her to land.

McGuckin’s yacht Hanley Energy Endurance was also left drifting when the Osiris crew picked him off the yacht. In a statement today, Neil O’Hagen, spokesman for Team Ireland said, “During the controlled evacuation of Hanley Energy Endurance, McGuckin was instructed to leave the vessel afloat. The French fisheries patrol vessel Osiris instructed McGuckin that scuttling the vessel would be in breach of international maritime regulations. Hence, McGuckin removed all debris from the deck that could become separated, secured all equipment on board, and ensured the AIS beacon was active. The power source to the AIS device is solar panels which should remain active without any outside assistance, reducing the risk to other vessels. Precautionary steps were also taken to ensure the relatively small amount of fuel onboard is secure.”