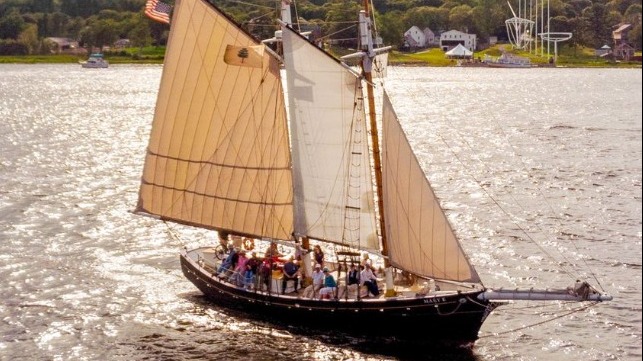 It is thought that the schooner was knocked down by strong winds off Bath. Pic - Maine Maritime Museum

On Friday evening, local first responders rescued 18 people from a historic schooner which capsized near the town of Bath, Maine.

That evening, Coast Guard Sector Northern New England watch standers received a report that the historic schooner Mary E had capsized near Doubling Point with 18 people onboard. The Bath Fire Department, security boats from Bath Iron Works, good samaritans and a Sea Tow response boat arrived on scene and rescued all 18 people from the water. Two were sent to a nearby hospital in Brunswick, according the Press Herald.

The Coast Guard dispatched a Station Boothbay Harbor boat crew to assist. Working together, responders and the schooner’s crew managed to stabilize the Mary E before she fully sank.

The cause of the casualty is not fully known, but in a statement, operator Maine Maritime Museum said that it was a knockdown. Winds were moderate at the time, averaging 10-15 knots with stronger gusts. Coast Guard investigators and marine inspectors will be looking into the circumstances.

For the full story, see: https://www.maritime-executive.com/article/18-rescued-after-historic-schooner-capsizes-near-maine-maritime-museum