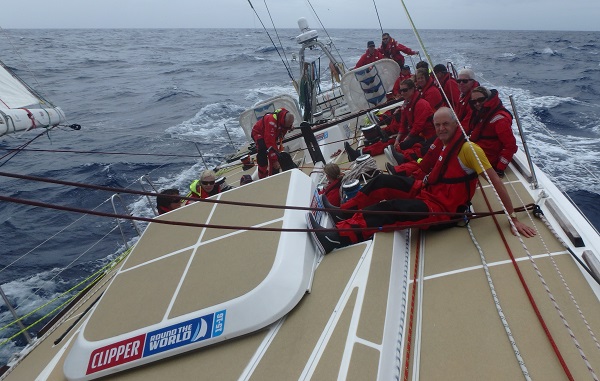 The high pressure system ahead of the fleet off South Africa is causing a tactical headache for the Skippers as they analyse the navigation and weather options for the approach into Cape Town.

The wind will drop further over the next day, and the teams will be facing a very different challenge of finding a route with enough wind to keeping the boat moving in the lighter airs.

Garmin, Derry~Londonderry~Doire and Mission Performance will all go into Stealth Mode at 1200UTC in an attempt to hide their tactics over the final 500 nautical miles.

On the leaderboard, Derry~Londonderry~Doire has moved up a position after a fast and focused period which saw it set the time to beat over the Ocean Sprint section, putting Mission Performance back a place.

However, after corrected positions based on average speeds, LMAX Exchange is still currently in first (by approx 30 miles), and Qingdao fifth on elapsed time.

“What is going to happen in this light wind high pressure system ahead of us? The eastern most yachts will sail into it and pretty much stop, the western most will catch up and at that point it will be dissipating with winds building.

“All together again bee lining for Charlie Tango. The wind is increasing quickly from the south and we could be quite a close bunch reefed down dealing with 30+ knot winds rounding the point looking for the finish line watching each other’s every move,” he said.

Huw Fernie, Skipper of Visit Seattle, in tenth, added that navigation and weather planning is becoming more of the focus than outright speed in preparation.

“The last section of the race will be interesting. We still have a lot of chasing to do to get ourselves out of this position in the fleet, closing the gap is measurable and that gives us something to concentrate on,” he said.

See how the High Pressure System effects progress as Race 2: The Stormhoek Race to the Cape of Storms continues….