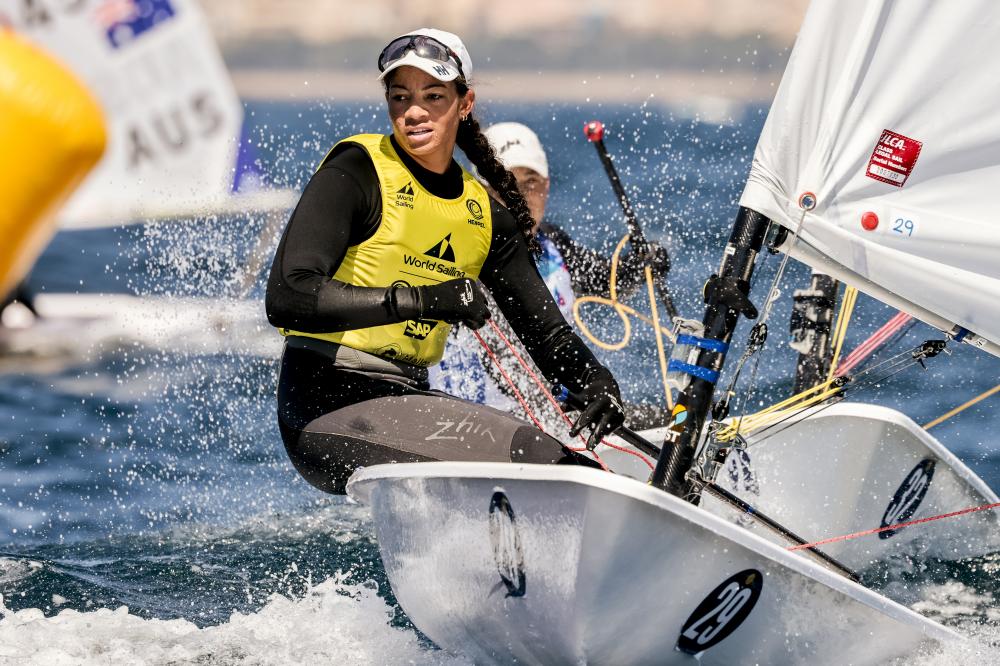 Sarah Douglas will start as one of the favourites in the ILCA 6. Pic - Sailing Energy / Princesa Sofía Mallorca

Amsterdam is to host more than 400 of the world’s best sailors and riders in nine Olympic disciplines at the Hempel World Cup Series at the Allianz Regatta.

Competition takes place from 31 May to 5 June in two venues. Almere will host the five ‘boat’ classes while further north, Lelystad will be the base for the four brand new foiling classes which have been introduced for the Paris 2024 Olympic Games. There is a real sense of excitement around the new events in the Olympic sailing line-up, not just the gravity-defying spectacle of flying at in excess of 30 knots above the surface, but for the radical race formats that bring more excitement to the final day of competition.

Asian countries – India in particular – are well represented in some of the more technical events. The Dutch Olympic regatta has always attracted a high international entry, and now with the move from the traditional venue of Medemblik closer to Amsterdam, there is a drive to bring the thrills of Olympic competition closer to the public.

The Hempel World Cup Series at the Allianz Regatta is part of a brand-new initiative called Dutch Water Week, whose aim is to expose the public to the world of water sports and to encourage more people to get involved in sailing and other activities on the water.

The new foilers in Lelystad

Even the non-sailing public will get a thrill from watching the foiling classes racing close to the shore in Lelystad. The sheer speed and athleticism are easy to understand and appreciate, whether or not you have ever sailed before.

In the iQFOiL category The Netherlands has two of its best-known stars from the previous Olympic cycle. The three-time RS:X World Champion Lilian de Geus competes on the iQFOiL board in the women’s fleet and Tokyo 2020 Olympic champion Kiran Badloe has also made the switch from low-riding RS:X windsurfer to the high-flying iQFOiL in the men’s fleet.

In the other new foiling class, the Formula Kite, a number of young riders are fresh from competing at the U21 Kitefoiling Youth World Championships in Sardinia.

Bronze medallist at last year’s senior World Championships, Riccardo Pianosi (ITA) also took bronze at the Youth Worlds, showing just how much teenaged talent is operating at world class level in this still very new discipline. Pianosi will be among the frontrunners alongside another teenager, Antigua’s Tiger Tyson, and the big Frenchman Benoit Gomez who won silver two months ago at round one of the Hempel World Cup Series in Palma, the Trofeo Princesa Sofía.

The female kiteboarders include Under 19 Youth Sailing World Champion Gal Zukerman (ISR) and fellow Israeli Maya Ashkenazi who last week picked up silver in the U21 Kitefoiling Worlds, as well as Heloise Pegourie of France whose bronze shows she is making rapid improvements regatta by regatta.

The boat classes (in Almere)

The Allianz Regatta has attracted a high number of entries from Asia including in classes where Asia has not been that well represented in the past. India, for example, has entries in the Nacra 17 foiling catamaran fleet as well as in the 470 Mixed. The 470 fleet has entries from as far away as Japan, Korea, Thailand, Malaysia and Australia. However, the team to beat is from Spain, Tokyo 2020 Olympic bronze medallist and SailGP skipper Jordi Xammar, crewed by Nora Brugman. This new pairing dominated round one of the Hempel World Cup Series in Palma two months ago and will be hard to beat at this regatta.

Another dominant performance from the Trofeo Princesa Sofìa in March was that of Canadian ILCA 6 sailor Sarah Douglas who will start as one of the favourites in this hot fleet. Having become a mother for the first time earlier this month, The Netherlands’ own multiple world and Olympic medallist Marit Bouwmeester is temporarily absent from competition so it’s up to Maxime Jonker and the rest of the Dutch squad to make their mark on home waters. Others to watch include Maria Erdi of Hungary, Vasileia Karachaliou of Greece and reigning World Champion from Belgium, Emma Plasschaert.

With the ILCA 7 World Championship taking place in Mexico there is no ILCA 7 fleet competing at the Allianz Regatta. However, the ILCA 7 (Laser) Olympic Champion from Rio 2016, Australia’s Tom Burton, has made the switch to the 49er and with crew Simon Hoffman is looking to adapt as quickly as possible to high-speed doublehanded skiff competition.

Another Rio Olympic Champion is Sime Fantela (CRO) who won 470 gold in 2016 and just two years later his brother Mihovil won the 49er World Championships in 2018. The Croatian brothers are among the strong 49er line-up in Amsterdam along with home favourites and reigning World Champions from The Netherlands, Bart Lambriex and Floris van der Werken.

The Dutch hold the world titles in both skiff categories, and Odile van Aanholt and crew Annette Duez will be hard to beat on home waters. Having tried out with a few different crews over the past couple of years, van Aanholt is delighted to be teaming up permanently with her former rival for Olympic selection.

“I’m very excited we’re teaming up,” said van Aanholt. “I really believe in Annette and me as a team, the gut feeling is right. We won the first World Cup of the year which is a great start but also noticed lots of room to improve. It’s less than two and a half years to the Games so not very long. We’re looking forward to the challenge!”

There is plenty of talent to give this dynamic duo a run for their money, however, including some strong Italian crews. Jana Germani and Giorgia Bertuzzi took bronze at the Trofeo Princesa Sofìa in March and will be looking to prevent the Dutch from repeating their Palma victory.

Odile van Aanholt predicts some tricky, challenging sailing in the new venue. “It’s going to be very shifty and puffy, no boring stable stuff!” she laughed. “It will be great for skiff sailing and of course for us in The Netherlands it’s always nice to race so close to home, when friends and family can visit us and see what we do. I think we’re going to have a lot of fun.”

For more information about the Hempel World Cup Series at the Allianz Regatta, including entry list, notice board and more, click here.

By Andy Rice for World Sailing.