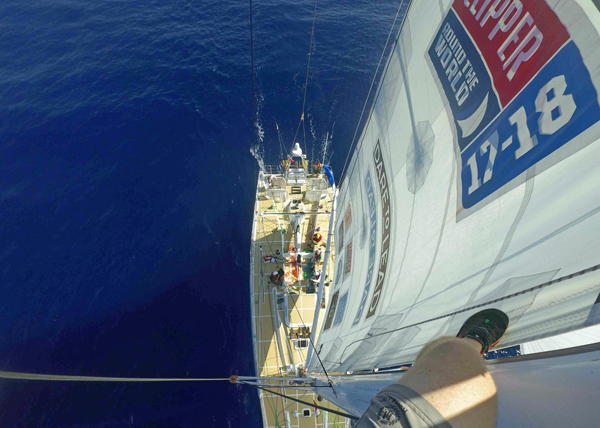 Qingdao in the Clipper Race up the Australian coast. Photo Clipper Ventures.

Light winds on the sixth day of Race 6: The Wondrous Whitsundays Race mean that the fleet has converged and the heat is on, quite literally, as the teams battle it out for extra bonus points in the Elliot Brown Ocean Sprint.

Sanya Serenity Coast has wrestled back the lead after it initially re-emerged from Stealth Mode in third place yesterday and Skipper Wendy Tuck is in great spirits explaining that: “It has been a lovely day under spinnaker – a bit light but still very pleasant. This race will just keep on giving with lots of choices to be made – we are back in the mix again after some awesome crew work.”

Less than ten nautical miles separates the top four teams and it is Liverpool 2018, which currently occupies second place, chasing the lead while negotiating wind holes. Skipper Lance Shepherd reports: “As I type we are sailing under our Windseeker in the hopes of keeping up with Sanya Serenity Coast in these very light winds off the coast of Evans Head.”

Also staying close to the coast with the top two is fourth-placed Qingdao, which re-emerged from Stealth Mode this morning, whilst Visit Seattle is slightly further offshore in third place. Skipper Nikki Henderson is keeping her spirits up despite losing a couple of positions since yesterday: “Slowly but surely we are creeping, creeping through the Elliot Brown Ocean Sprint – it almost seems ironic to call it a sprint now.

“We started so well, screaming along at 10-12 knots – but frustratingly the weather lightened off overnight and now we have fallen behind. Sanya Serenity Coast and Liverpool 2018 just popped up on our AIS though so the race is still on out here.”

Garmin, which was in third place yesterday, has activated its invisibility cloak and will re-emerge from Stealth Mode at midday (UTC) today. In the meantime, Skipper Gaëtan Thomas reports: “Maybe we are doing well, maybe not, we'll see soon! The most important thing, we are having fun here onboard Garmin.”

Further east to the top four is PSP Logistics and Dare To Lead, in fifth and seventh respectively, while Unicef has decided to head inshore and is currently in sixth. Skipper Bob Beggs explains: “We decided last night to disengage from sailing close to PSP Logistics as our routing software suggesting that we might fare off better tacking further inshore in search of better wind conditions.”

Also staying close to shore is GREAT Britain in eighth and none of the teams appear to be able to escape the heat with Nasdaq Skipper Rob Graham, currently in ninth place, reporting: “The heat on deck is getting fierce now as we get further north, and we're back into the realm of saltwater showers on deck.”

“After losing and then re-finding our friends on GREAT Britain, we had a quick photoshoot with them yesterday afternoon when we crossed tracks only 100m or so apart.”

Despite the heat, HotelPlanner.com has been working hard in tenth place and Skipper Conall Morrison explains that the changeable conditions have led to multiple sail changes: “Last night we were sailing with Code 1 (lightweight) spinnaker and very light winds; this morning we noticed some dark clouds and there was a wind shift followed by some rain and then no wind, followed by the South-Easterly that we started with.

“Both watches are now happy that they are getting to work in all areas around the boat and lots of evolution practice.”

Clipper Race Meteorologist, Simon Rowell, has good and bad news for the fleet reporting that the breeze should gradually pick up although it will gradually be back on the nose with headwinds set to continue past Cape Byron and then further north past Fraser Island.

The GREAT Britain crew took a moment to reflect on life outside of racing today as Skipper Andy Burns explained that some of his onshore crew will be attending Simon Speirs’ memorial service today in Bristol: “Love and best wishes to Simon’s family and close friends from myself and the crew here onboard. Our thoughts are with you all. Those who met him will all remember what a truly great gentleman he was which I'm sure will be reiterated today in what I can imagine to be a very full and heart-warming service.”

The latest Estimated Time of Arrivals for the teams into Abell Point Marina, Airlie Beach, can be found on the Clipper Race website and will be updated regularly as the teams approach the Finish Line.

In the meantime, keep up to date with how the changeable weather conditions  affect the fleet as it completes the Elliott Brown Ocean Sprint via the Clipper Race Viewer and hear more from the Skippers and crew on the Team Pages.

Race 6: The Wondrous Whitsundays Race will finish in Abell Point Marina, Airlie Beach and the fleet is expected to arrive between 13 – 15 January ahead of the inaugural Whitsundays Clipper Race Carnival.

All positions were correct at time of writing.