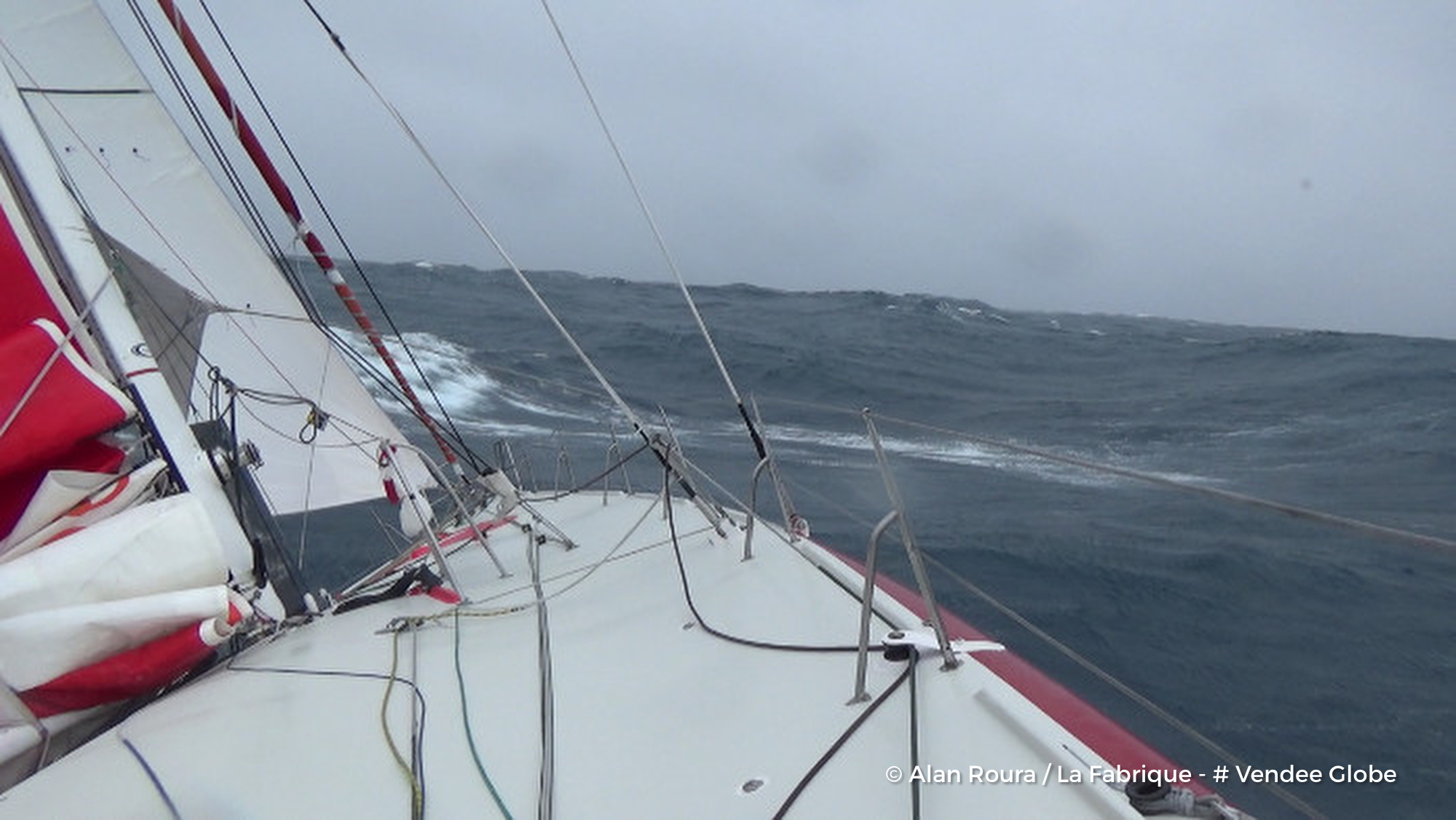 The Atlantic Ocean gets a bit dull for La Fabrique as she works toward the finish line.

For the Vendée Globe leaders, this eighth edition of the solo round the world race is increasingly feeling like a game of two very distinct, contrasting halves.

From the start on Sunday 6th November in Les Sables d'Olonne the pace was fast and furious, smashing records at each key point to Cape Leeuwin and into the Pacific Ocean. Even when Armel Le Cléac'h (Banque Populaire VIII) rounded Cape Horn on 23rd December, the French skipper had an advance of five days, five hours and 38 minutes on the existing record to the legendary cape, set on January 1st 2009 by François Gabart. But a complicated and slow climb up the South Atlantic for the leading duo, Le Cléac'h and British skipper Alex Thomson (Hugo Boss) – who this afternoon is 246 miles behind his French rival – has seen their margin against the record melt away like snow in the sun.

By comparison, in January 2013 Le Cléac'h and leader Gabart had a relatively straightforward ascent of the Atlantic, pushing each other hard to the line.

As it stands this Wednesday afternoon the leaders are now only about 1150 miles or about three ‘normal' days ahead of the existing record. And, ahead of them, though the next two and a half to three days to the Equator should see a small acceleration in ‘foiling' conditions – 15-17kts E'ly then SE'ly tradewinds, the Doldrums look wide and active and the passage to the Canaries – at this time – is predicted to be atypical.

Once out of the Doldrums the NE'ly trades do not look to be too reliable at the moment. And so any Christmas time great expectations that Gabart's record would be blown apart by days now seem a little more fanciful.

Over the last two days, pre-race favourites, Jérémie Beyou and Yann Eliès, have sounded increasingly content with their position in the race. Both are ultra competitive, three times winners of La Solitaire du Figaro and for sure harboured aspirations of winning. But as they, too, sail northwards up the Atlantic, Beyou in third and Eliès in fifth, it is immediately apparent that they are now much more comfortable in their own minds with their positions in the fleet.

In third, Beyou has been fortunate to slash more than 400 miles from his deficit to Alex Thomson and yesterday sounded almost light hearted, a notable evolution for a skipper who has had some dark days, struggling with technical problems.

Today it was Eliès's turn to relish his northwards passage and his emerging intact from the Big South and in fighting form. For all that he might have hoped to beat veteran Jean Le Cam, 57, who is 13 miles behind him in sixth and who he has raced closely with since they entered the Pacific and to have outwitted Jean-Pierre Dick who is 59 miles ahead. Eliès is now 75 per cent of the way through his second attempt at the Vendée Globe.

Eliès's first shower in one month, in South Atlantic water of 12-13 deg Celsius, not only was about getting clean, but was as much about resetting his mind, purging expectations and re-focusing on the business of beating his two nearest rivals who between them have six Vendée Globe finishes to their credit. “I am in good company. They are stars of the Vendée Globe. I don't think I'll be able to catch Jean-Pierre (Dick). It's nice to be having this close contest. The other two are exceptional sailors. I'd like to be in front of them, but it's not that easy as they are sailing so well,” said Eliès today, saying that he has read many books so far on his two Kindles, his way of switching off from the stress and noise.

Conrad Colman has tacked back towards the east late afternoon Wednesday and so is believed to have completed enough of his repairs to gradually power up his Foresight Natural Energy after struggling for more than 48 hours since losing the pin which secures his primary forestay, in a major storm during January 1st and 2nd. The Kiwi skipper had less than ten knots when he set his course back towards Cape Horn which is 1300 miles away for him, and he looks set to have light conditions for some hours to come.