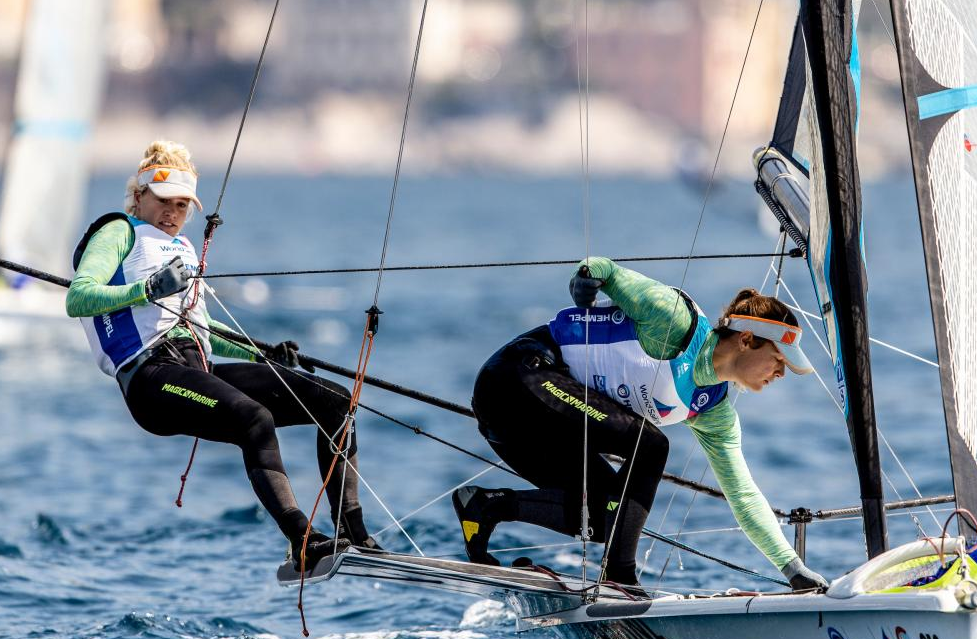 Odile van Aanholt and Marieke Jongens (NED) snapped up a hat trick of race wins in the 49erFX to propel themselves into pole position at the Hempel World Cup Series event in Genoa, Italy.

Hitting the top of the 49-boat 49erFX fleet holds special relevance for van Aanholt and Jongens as the event is the first of two qualification events for Dutch qualification to Tokyo 2020 in the 49erFX, so the stakes are high. Four other Dutch teams are currently competing and sit in ninth, 18th and 36th.

Genoa was alive and kicking on Thursday for the fourth day of competition after fleeting winds the days prior dented progress in the racing schedule.

A 5-7 knot western breeze ensured that every fleet, minus the Laser Radial, managed to complete at least one race as the organisers work hard to catch up on races lost the days prior.

Van Aanholt and Jongens’ fleet, the yellow, completed three races in the 49erFX whereas the blue completed two. The 49erFX fleet now has five complete races which has brought the qualification process to a close, enabling gold and silver fleet racing on Friday.

Hempel World Cup Series Genoa is an important event for many teams with internal Tokyo 2020 qualification battles heating up but for Van Aanholt and Jongens, their perfect day has gone a long way in giving them an early initiative.

“Only one team per fleet goes to Tokyo 2020 in sailing,” said Jongens. “We’ve got four Dutch 49erFX teams and we’ve got two events to decide who goes to the Olympic Games.”

Van Aanholt continued, “Our trials are here and at the European Championship in Weymouth (Great Britain). Both regattas are weighted equally so it is important to do well here and there.

“To pick up points towards the trials you have to finish in the top ten. If you finish 10th, you take one point and if you finish first you take 10 points. If you finish outside of the top ten then you get no points. At the end of the whole thing it’s who gets the most points goes.

“It’s done this way, with the scores in the top ten, because we want a stable team who’s always at the top. If you’re in the top ten then it shows that there is potential for a medal at Tokyo 2020.”

Their performance has given them a good grounding for the remainder of the event. They currently lead on eight points followed by Sweden’s Klara Wester and Rebecca Netzler on 11 and Julia Gross and Hanna Klinga (SWE) third on 17.

Dutch rivals and 2018 World Champions Annemiek Bekkering and Annette Duetz remain firmly in the hunt for points in the qualification process. They are ninth, just 13 points off the leaders. Willemijn Offerman and Cecile Janmaat (NED) are 18th on 33 points with the final Dutch team of Dewi Couvert and Tess Wilschut in 36th and out of contention for points as they did not make the gold fleet.

Plenty of racing remains in the 49erFX with four races scheduled for Friday ahead of Saturday’s Medal Race which will be broadcast live on World Sailing’s YouTube Channel – www.youtube.com/worldsailingtv.

The 49er also completed their qualification series. The yellow fleet sailed four races and the blue completed three as the scores from five races are combined.

Croatia’s 2018 World Champions Sime and Mihovil Fantela took three wins out of five and hold the lead on 14 points. They are three clear of Diego Botin and Iago Lopez Marra (ESP). Australian brothers David and Lachy Gilmour are third.

The top 33 racers will advance to gold fleet racing on Friday before the top ten progress to Saturday’s Medal Races.

After a patient two day wait ashore for breeze, the 20-boat Finn fleet finally took to the water for three races.

Finland’s Oskari Muhonen revelled in the light winds in Miami, winning the Medal Race which gave him a silver medal. He excelled once again in Genoa’s light wind clinching a 1-(2)-1 scoreline.

“It was really nice to finally get on the water,” said Muhonen. “The wind was quite light but surprisingly stable. I had pretty solid speed throughout the day which made it easier for me. I just had to start good and find the right lanes to finish well.”

On his success in light wind he concluded, “It’s been my strength for a long time. Maybe because there is never any wind in Finland!”

Jorge Zarif (BRA) took the third race win of the day and is second overall with Alex Muscat (ESP) in third.

Much like the Finn, the Men’s and Women’s 470 also commenced racing but were only able to complete one race each.

“It was a very hard race,” said Cohen. “We had a few recalls before the race got going. It was very important to remain focused at all times. On the last downwind we had very good speed and we moved up from second to first to take the win.”

Two blue and one yellow fleet race were completed in the Nacra 17 to establish an overall scoreboard with three results.

Ben Saxton and Nicola Boniface (GBR) took a race win and a second in the blue fleet and now lead on two points. Gemma Jones and Jason Saunders (NZL) finished third in the only yellow fleet race which was enough for them to move into second.

Three Laser blue races and two yellow races were completed. Tonci Stipanovic (CRO) sailed his way to a second, tenth and a 36th. His 36th does not yet count as the yellow fleet is a race behind. He holds the lead but he currently discards his tenth but his discard will be his 36th once the yellow fleet catches up.

Most of the competitors hold high scores so once the yellow fleet complete their fourth, plenty more shuffling around is expected.

The Laser Radial pushed to complete a race but it was just not possible as the wind died towards the latter part of the afternoon. Line Flem Høst (NOR) and Maud Jayet (SUI) remain tied on a point each after one yellow and blue race.

Racing starts at the earlier time of 10:00 local time on Friday as the Race Committee look to capitalise on a stronger breeze forecast early in the morning.