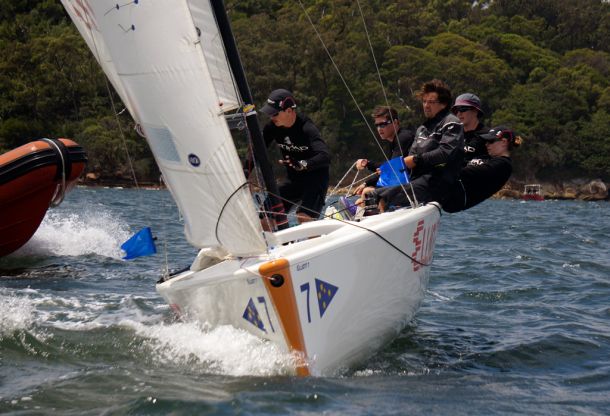 Royal Sydney Yacht Squadron race officers today had to use a countback of wins to decide the order going into tomorrow’s finals of the Hardy Cup match racing regatta after three skippers and their crews ended with 15 wins each after the two round robins.

Sam Gilmour’s Neptune Racing team from Perth’s Royal Freshwater Bay Yacht, Chris Steele’s 38 Below Racing team from the Royal New Zealand Yacht Squadron in Auckland and Jay Griffin’s team from the Cruising Yacht Club of Australia in Sydney each ended the day with 15 wins from the 18 match races sailed.

The countback of wins and losses against each other in this prestigious ISAF Grade 3, Under 25 match racing regatta placed Jay Griffin and his crew of Henry Kernot, Alex Chittenden and Matt Stanta as number one on the leader board, giving Griffin the choice of his semi-final opponent tomorrow.

Chris Steele and his crew of Josh Salthouse, Shane Diviney and Hamish Hardy are ranked second, with West Australian Sam Gilmour and his crew of Chris Smith, Adam Negri and Jack Breislin ranked third. Making up the four crews going into the semi-finals is another WA team, Matt Jerwood and his crew of Alexander Landwehr, Mark Whitington and Seamas Mullholland-Patterson.

This Redline Racing team from South of Perth Yacht Club finished the two round-robins with 12 wins from 18 races.

All four top teams did well in last week’s Warren Jones International Youth Regatta on Perth’s Swan River, Chris Steele winning on a countback from Sam Gilmour with the CYCA team skippered by Jay Griffin but with Henry Kernot as helmsman in third place overall. Matt Jerwood placed fifth overall after leading through the two round-robins.

Racing today was delayed until after midday when a light southerly moved up the Harbour, freshening during the afternoon to 12-16 knots with some sharp gusts of up to 23 knots.

While the conditions earlier in the afternoon were ideal for match racing, the gusty southerly winds later proved testing for the seamanship of all crews.

Hardy Cup standings after 18 match races over two round-robins, with the top four teams to race in tomorrow’s semi-final matches: