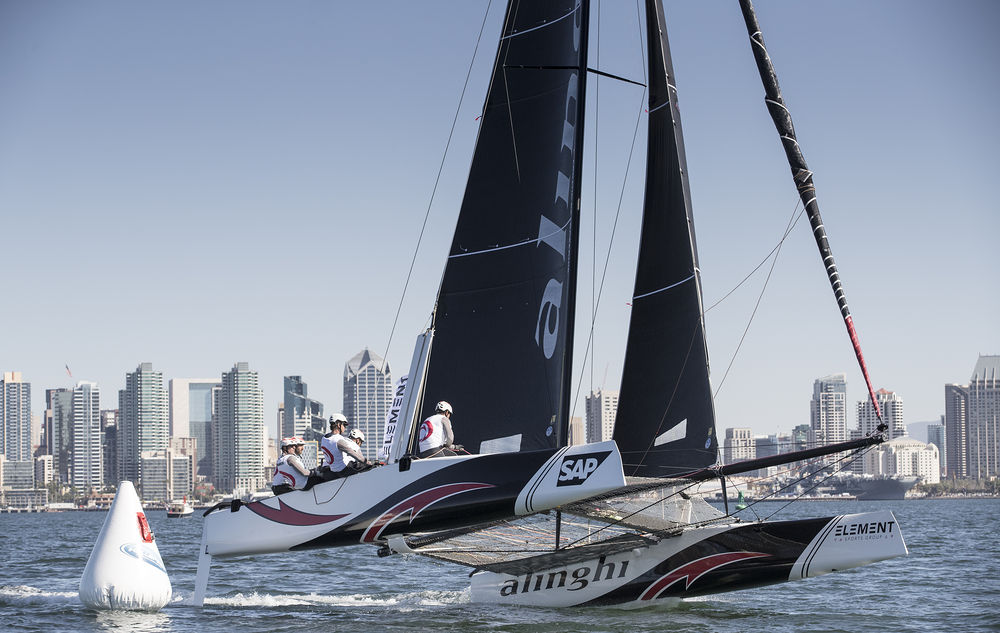 San Diego Bay and its banks were buzzing with activity today as the Extreme Sailing Series came to town for the penultimate stop on its 2018 global tour.

The Californian crowds swarmed to Harbor Island as the world-class international fleet of seven GC32s, including a US team, hit the water with force, flying on their foils before the impressive San Diego skyline.

Although glorious sunshine drenched the city from early on, the wind played hard to get in the morning. A slow building breeze caused Race Director John Craig to postpone racing until 15:00 local time, keeping the crowds on the edge of their ringside seats as they awaited the fast and furious on-the-water fight.

“The breeze was forecast to be a little better later in the afternoon,” he explained. “We may have started late, but we only lost about half an hour of sailing since I extended the racing beyond the planned 17:00 finish. We got six great races in today; I'm very pleased about that.”

The delay only increased excitement and added to the incredible atmosphere in the US city, as spectators looked forward to the commencement of the highly anticipated Stadium Racing championship.

The first day of the Californian competition did not disappoint, with the teams launching themselves off the start line with vigour. True to form, current Series frontrunners Alinghi took four wins out of six, cementing themselves as the ones to beat in San Diego.

Not content in the shadow of the Swiss, Phil Robertson's Oman Air seized every opportunity to snatch precious Series points from their opponents. The Omani squad, who have consistently ranked third overall throughout the year, saw day one in San Diego as their time to shine; the team took five podiums out of six, closing the day in second place.

“The wind definitely kept us on our toes today,” he laughed. “We had an increasing breeze that then suddenly died – it made for a lot of gear changes on board! We're still trying to find our feet a bit. It was a good day, but we'd love our scores to be even better.”

A few podium finishes were scattered across Red Bull Sailing Team's scores too, following a crew shake up for the San Diego Act. With double Olympic gold medallists Roman Hagara and Hans Peter Steinacher back on board, and bolstered by Kiwi Tokyo 2020 hopeful Micah Wilkinson, the team took a fair few chunks out of their competitors' points, securing podium finishes in half of the day's races.

“We're effectively a new team for this Act,” said Steinacher, who is trimming the mainsheet on the GC32 for the first time this year. “Micah is doing a great job on the foils, and Roman and I are back for some action too. We were taking it easy today and having a lot of fun on board – that's the main thing for us.”

Providing an air of familiarity being so close to home, Extreme Sailing Series San Diego, presented by SAP, is one of the Acts that Team México have been preparing for since they first stepped foot on the circuit. With the lights of Tijuana, on the other side of the border, visible from the bay, the boys on board the Mexican boat zoomed around the course with purpose, enjoying every moment.

There was similar motivation for local team Element Spark Compass – a team backed by two of the latest Series partners. After a glamour day's sailing on home waters, spent learning about their GC32 and foiling around San Diego Bay to cheers of the crowds, the crew stepped onto the dock smiling at the end of racing.

“It's so great to have a US event on the Extreme Sailing Series,” said a pleased Taylor Canfield, US match racing champion and skipper for the team. “It's our first event of the season so we're still figuring things out. We have no doubt that we can be strong contenders here in San Diego.”