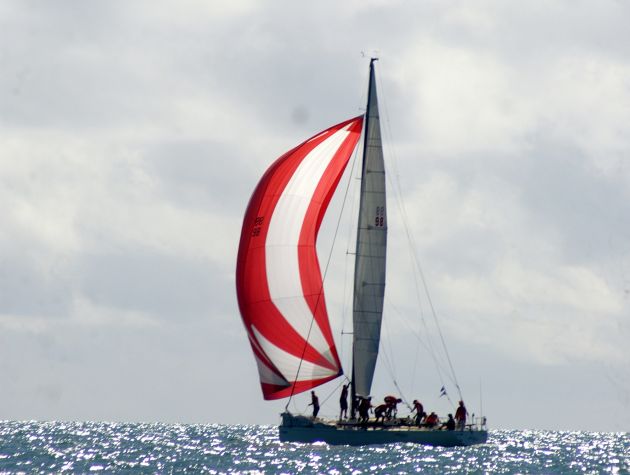 Port Douglas Race Week has reached the halfway mark and the Division 1 Performance Handicap is being contested robustly. After a first day of good sailing on a magnificent Port Douglas race track, the second day dawned with grey skies and the, fulfilled, promise of rain.

At the end of Day 1 the leader was Frank and Wendy Brace's Sydney 36crImpulse but fortunes changed for the Cairns based boat on the second day with the Farr Phase 4Volare 1, skippered by Neil Robson and Frances Westley,taking the lead after a damp passage race around Snapper Island with a hefty beat to Low Isles and back to the line. Splitting the field between first and second day's leaders is the Beneteau 42s7 Yes skippered by John Pool also from Cairns.

The gloomy conditions didn't deter the fleet as they streamed toward Snapper with kites throwing splashes of colour against the grey.

Division 2 Performance Handicap (NO spinnakers or Code Zeros) had home town favourite Lady Mystique in the lead on both days, skippered by Helen and Mick Gwilliams the Beneteau 440 is shaping up as the vessel to beat after two days of superb sailing by her skippers and crew. In second place is another PDYC boat Alf Fowler's Ka Pai closely followed by Royal Geelong Yacht Club's Sapphire of London sailed by Grant Stquentin.

The Division 4 sports boats have been sorting themselves nicely and several boats are in contention to take the title. Day 1 leader Fast Forward couldn't repeat the performance with Tony Ritter on Spank taking the lead on the second day. Race Director Greg Sinclair said that Kaizen 2 had a very good day on Wednesday. Bruce Clarke's J24 is a regular competitor and past winner at Port Douglas and knows the conditions well so he could be the one to watch in the days to come.

Racing resumes on Friday with the regatta finish on Saturday.