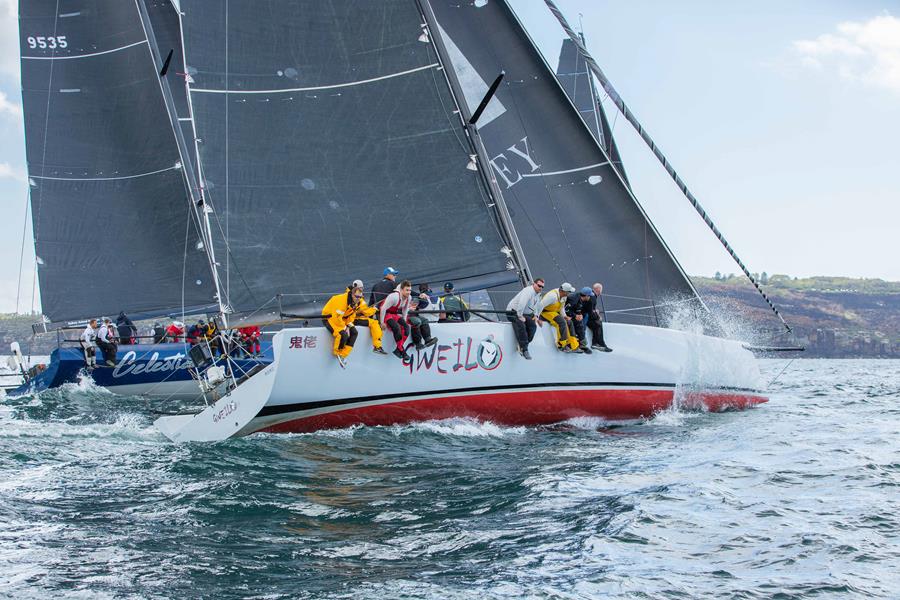 After a tactical sail down Sydney Harbour

After a light, tactical start in Sydney Harbour 1000hrs Saturday 7 November, the 37-strong fleet headed for the ocean and north to Bird Island as the southerly breeze began to build in intensity. By lunchtime, teams were recording almost 30 knots of wind and Gweilo was hurtling towards the island turning point at over 20 knots.

“For the start, we had very fluky, very changeable conditions in the Harbour, but after the reach out to North Head it was on for young and old,” said Gweilo co-owner Chris Townsend. “It was pretty exciting racing, for the TP52s it was effectively an eight-hour match race.”

With six 52-foot rivals to contend with upfront, including Matt Allen’s two-time Rolex Sydney Hobart Yacht Race winner Ichi Ban, the Gweilo team had plenty on to ensure their victory.

“When we came into Bird Island it was ourselves, Ichi Ban and Celestial, all within about 150 metres of each other, doing 20-plus knots – you can’t really ask for more exciting racing than that,” said Townsend. “We’re very fortunate to have such a high-quality fleet here in Sydney. It’s a situation where the little mistakes get punished and all the boats are pushing each other. The incremental improvements that all the boats are making really do make quite a difference.

“We’re also very fortunate with the amount of talent around Sydney to help sail these boats as well.”

Carl Crafoord’s Cookson 12 Sail Exchange was also all-class on the day, managing to lead their IRC Division 2 for most of the race and coming home strong to clinch the divisional victory.

Ichi Ban took home ORCi Division 1 victory with Division 2 going to Ron Forster’s Beneteau First 40 Ariel, another team who sailed a stellar race leading their division for much of the day.

PHS Division 1 was claimed by Rob Aldis’ DK 46 Khaleesi who were pipped for IRC victory by Gweilo by just two minutes on corrected time, and PHS Division 2 went to Ariel.

All eyes now turn to Race 2 of the BWPS, the Cabbage Tree Island Race 1900hrs Friday 4 December, and of course the Rolex Sydney Hobart Yacht Race on Boxing Day. After their Bird Island IRC victory and other recent strong performances, Gweilo will certainly be a team to watch this season.

“We’re making the best of a tough year all-round in terms of doing as much sailing as we can. We’re just all pretty lucky that the Hobart race is going ahead, COVID-dependant, and we have something to look forward to on Boxing Day” said Townsend.

“For Matt (Gweilo co-owner) and I, we’re loving our sailing, doing the best we can, and we’ll keep pushing as hard as we can.”