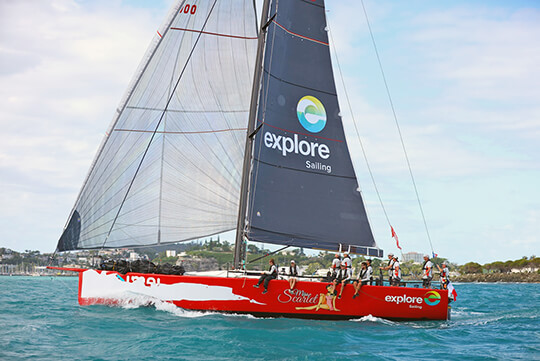 With at least a third of their red hull vinyl wrap peeled away on the port side, the Kiwi boat ran towards the finish line under their Code 0 in 12-14 knot westerly winds, relaxed given the 46-minute gap back to their countrymen on Brian Petersen’s Ran Tan II.

Miss Scarlet finished the sixth edition of the Groupama at 11:12:43 local time.

On the final morning, Wednesday June 20, 2018, Ran Tan II squeezed the gap to Miss Scarlet to just 4.6 nautical miles, but ran out of runway to catch them. At 11:58:25 Noumea time Ran Tan II, sailing for the Royal New Zealand Yacht Squadron, crossed.

Steering Miss Scarlet into Port Moselle harbour Goodfellow said “it was a very interesting race with lots of transitions, lots of different breezes and from no wind to plenty. We kept to the left going around the bottom of the island on the first afternoon, and extended from there. The gap from us to the next boat grew and shrunk – we were definitely watching the others very closely. It was a fabulous fabulous time.”

And the missing red vinyl wrap? “We were going too fast and ripped it off!” he smiled.

Wilson, the boat’s co-owner and navigator said “the scenery at the bottom end of the island and through and out the reef was magic. We loved it. To be able to sail with Franck [Cammas], who put on a masterclass in driving this morning, was a privilege. And it was great to navigate with Franck; because he’s a solo sailor everything with him is weather strategy whereas Scotty Dickson (tactician) is all about where you position yourself compared to everyone else. We were blending the two inputs and it worked out really well for us.”

Next stop for the Royal Akarana Yacht Club boat, which also scooped the main IRC trophy in the Auckland Noumea Yacht Race, is Hamilton Island Race Week then Magnetic Island Race Week in August, then back to Auckland.

Guest crew on Miss Scarlet, VOR winning skipper Franck Cammas, offered his thoughts: “it was tough, a very good race, we were fighting against Ran Tan, he was just behind us all the time. I am new in the group so we had to have good communication.” And sailing with the Kiwis? “They are very good sailors so it’s easy to sail with them, easy to win with them. It’s hard to understand the Kiwi jokes.” Next week Cammas is back to racings GC32s in Portugal.

After three days of barrelling around the South Pacific, Brian Petersen, skipper of the second placed Elliott 50 Ran Tan, said “we broke two plastic sporks, that was all”. Given they closed on Miss Scarlet on the final morning Petersen admitted “last night we did entertain some hopes we would catch them”.

At maximum speed Ran Tan II recorded a top number of 26 knots and their averages were really high in the pressure, especially on the final night. “We had a lot going on, a lot of sail changes and time spent on strategy, not a lot of time for sightseeing. We slowed down at times but never saw three boiled eggs on the speedo. We didn’t get that much sleep; that goes with the territory,” the weary Peterson added.

Tony Kirby’s Ker 46 Patrice finished third. Now the Sydney crew will spend some time sweating on whether they can hold onto the IRC and ORC top spot.

Drew Carruthers’ Rushour will be the first multihull back to port, and the breeze is holding.

For those 16 boats at sea, 15 knots of south-west winds have quickened the fleet’s overall pace. Lisa Blair’s Dove-Defi des Filles, a Young 11, has turned the north-west corner of the boundary and behind them Shane Kearns’ S&S 34 Komatsu Azzurro has 300 nautical miles remaining. The last in the fleet, New Caledonian boat SOCARE Odyssey, still has 340 nautical miles left of their Groupama Race.