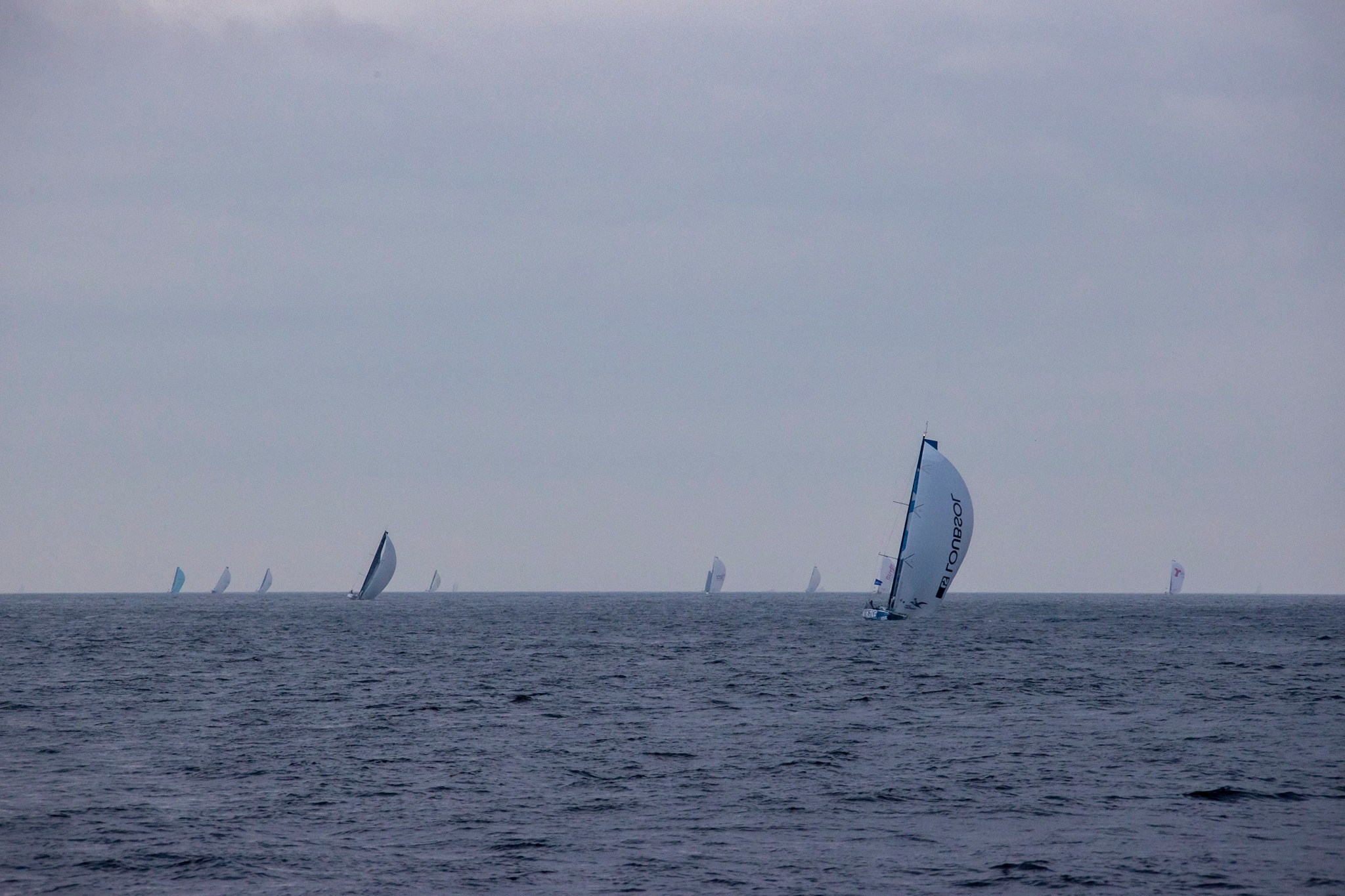 The La Solitaire fleet making the most of 20-plus knot winds. Pic - Alexis Courcoux / La Solitaire

Irish skipper Tom Dolan leads Stage 4 of La Solitaire du Figaro towards the Fastnet Rock and the waters where he did his first real offshore sailing as a sailing instructor out of Baltimore more than a dozen years ago.

A bold move while passing the Scillies and Land’s End gave the skipper of Smurfit Kappa-Kingspan a small lead which increased throughout Monday morning and early afternoon. The passage to the Fastnet has been good in the past for Dolan who was in the lead group, rounding third behind Xavier Macaire in 2019.

After leaving Roscoff on Sunday at 1600hrs on the 685 nautical mile final stage of the race to Saint Nazaire, Dolan took the lead early this morning when he chose to pass to the west of the Lands End exclusion zone close to the Scilly Isles while the main pack, led by Xavier Macaire (Groupe SNEF) who is second overall on the General Classification, stayed closer to the tip of Cornwall.

The Irishman, who has not stepped on the home soils since La Solitaire du Figaro went to Kinsale in 2019, sailed closer to the rhumb line – the most direct route – and had more breeze which gave him a speed edge of up to two knots at times. French rookies Philippe Hartz (Marine Nationale-Fondation de Mer) and Mael Garnier (Ageas-Team Baie de Saint-Brieuc) went west too and lay second and third, Hartz more than five miles behind.

Compared with the disappointed skipper who arrived in 19th into Roscoff on what has been a disappointing La Solitaire du Figaro so far, having finished fifth overall last year, it was, however a  much more upbeat, chirpy Dolan who spoke in French to the media team on board the Race Direction’s guard boat in the middle of the Celtic Sea.

“I was kind of expecting this ranking following my route to the west of TSS,” said Dolan. “I knew I was ahead but I didn’t know by how much. It’s great to be in this position, especially when I feel like I’m heading homewards towards Ireland. I come from a small town which is in the north east of Ireland, north of Dublin, almost on the border with Northern Ireland.

“I had seen from the files that it was more wind in the west, and that there was something to do. I lost everyone with the fog last night and the AIS not working. I had my doubts, I thought I was the only one going that way. But we have also Philippe (Hartz) and Maël (Garnier). I think it was them as I heard them talking in the radio. The Fastnet, I must have passed it about 50 times because I spent a lot of time in Baltimore, and we often went out there often.

“Right now the sun is shining, it’s great if a bit rare at this time of year. I’m afraid there won’t be much wind when I get to the lighthouse. This morning, I slept a lot and now I’m steering a lot to get to the Fastnet because I would like to get round before the bad wind arrives. I feel like I’m on the right timing I think, I have my fingers crossed, I might get some good luck from Ireland.”

The situation ahead, as forecasters predicted, looks messy and complicated and the leaders will be first to face a complicated zone of light winds. Some models show an occluded front passing across the fleet slowly from west to east around midnight, just before the leaders should be at the Fastnet Rock, others are not so clear. If Dolan can hold the lead and the luck of the Irish offers him a perfect transition he – or the leader – could come away with a new North Westerly breeze.

Alternatively a windless, sticky mass is also shown on other weather models. Recent routings have the fleet leaders well ahead of the original timings.

Dolan said, “I am happy with my position at about 80 miles from the Fastnet, I think we will arrive there about midnight Irish time. It will be a bit of a pig because I was looking forwards to seeing Ireland, so I won’t see much of it this time around. I am happy to be going there just the same.

“The conditions are fairly good at the moment. I have around 20-24kts of wind and am under big spinnaker with a bit of swell over the back of the boat and I am pushing along at 12-13-14kts. I am happy with what happened. On the GRIB files I had seen there was a but more wind in the west and sailed very low and it seemed to work. I was a bit doubtful heading into the fog but here we are, voila, voila.”

At 1700hrs BST/1800hrs CET France Tom Dolan was in front of Hartz, in second place, by 5.4 nautical miles. But fourth placed Macaire had cut nearly five miles from the Irish skipper’s lead during the afternoon to be just over seven miles behind.

Xavier Macaire (Groupe SNEF) this morning, “It went well last night. I was on a little bit of an option to the west to leeward of the fleet. It was a bit risky at first as the wind picked up in the east and I saw the other guys speed up first. I was a little afraid that I had made a small mistake. I persisted in that option to leeward and it paid off in the end when I got to Land’s End and TSS.

“At first, I wanted to be able to switch either side of the TSS to the west or the east. But it shifted and I came back to the east at speed on a good angle. There’s going to be quite a bit of slack, erratic winds, but at the moment it’s relatively stable with 10-12 knots southeast on the route to the Fastnet. I managed to get some rest. I took a few short naps. Everything is fine, the boat is fine, so am I It’s nice to be in front and to have played a nice option.

“It reminds me of the 3rd stage when I passed Land’s End in the lead. But, I keep a cool head, a lot is going to happen so I stay focused and zen. A lot of us went east, I don’t think there were a lot that went west. The bulk of the fleet is behind me and beside me. You can’t know for sure, there may be surprises, but given the timing we had, we were quick on the sleeve crossing and that was the right thing to do.”