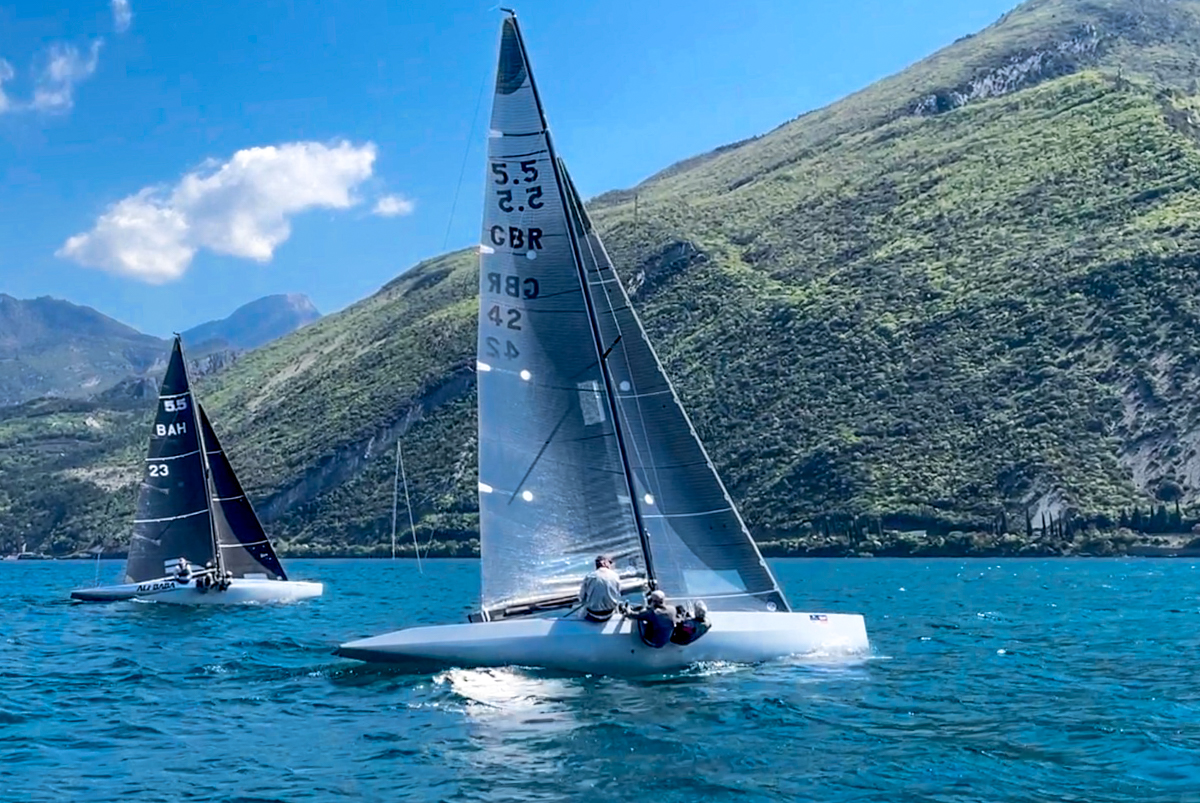 Girls on Film set the pace on the opening day of the Alpen Cup. Pic - Robert Deaves

The international 5.5 Metre season opened in 2022 as it closed in 2021, with the Alpen Cup at Circolo Vela Torbole on Lake Garda in beautiful conditions and a thoroughbred fleet of 11 boats from six nations.

It was a typical Garda day with a solid breeze rising from 16 to gusting 20 knots and some spectacular racing.

All eyes were on the new GBR 42, a David Hollom design, owned by Peter Morton, but skippered this weekend by James Howells. They led the first two races from start to finish.

Australia’s Andrew Palfrey explained, “The right side was always favoured. Our speed was good, and we managed to sail away at the start. We won the first two races handily, but it was never easy.”

In the first race some boats such as Aspire and New Moon went left out of the start and paid a heavy price, rounding the top right at the back of the fleet.

“In the second race, it was a busy start and everyone went right. We had a nice start just down from boat enabling us to tack away, and we just stretched away.”

Unfortunately that was the end of their racing for the day as when reaching around between the second and third race, the gooseneck broke, so they were forced to retire. It was quickly fixed ready for Friday.

After finishing last in the opening race, Apsire went on to win the third and final race of the day.

Mateusz Kusznierewicz commented, “It was a beautiful day. The wind was building up and it was a one sided race course and you had to hit the right side layline, so the start was crucial. We tried some other options but it didn’t work out from our perspective. [Laughing..] It was amazing to finish the race last. We fought hard but we didn’t manage to come back. I can’t remember the last time I finished last in a race, but we won the last one.

“Very good speed from the British boat. They were the fastest, so it was easy sailing for them. It was bad luck they broke the gooseneck just before the third race. So very interesting sailing.

“It’s a very strong fleet. You can see the teams have spent a lot of time training during the winter and it’s good level, actually from top to bottom. And good management from the club today, with a good briefing and with nice pasta after sailing so people are really enjoying being here, including us.”

Racing continues on Garda until Saturday

For the full results, see: https://www.circolovelatorbole.com/clientfiles/regatta