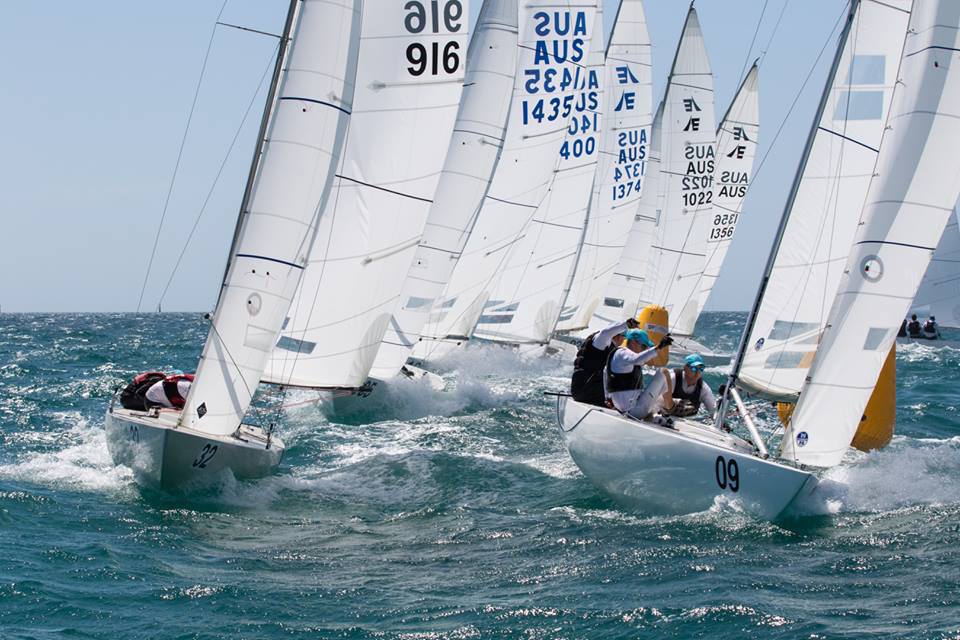 Magpie sailed by Graeme Taylor, James Mayo and Richard Allanson has one hand on the trophy this evening after scoring 2nd and 1st in the two races on the penultimate day of racing at the 2018 Etchells Australian Championship sailed off Fremantle.

Not so much wind today and a little cooler but the fleet of 32 Etchells left the dockside for two windward/leeward races of 1.5nm legs in a short, steep swell rolling in towards the harbour.

Race 5 of the championship was started in 15 – 17 knots of S/SW breeze. By day 3 the fleet were beginning to get used to the settings required for the boisterous conditions off Fremantle and the whole fleet were spread across the start line. Unfortunately a bit too close on the first start so the U flag came out.

Second go was a good clean start with the smart money down at the pin end. As per the usual pattern on this race track, the majority drag raced out to the left and tacked back on port like a line of soldiers to the windward mark in the lee of Garden Island.

Peter Chappell and his local WA based team from Royal Freshwater Bay YC were the early leaders but closely tagged by the visiting teams from the Eastern states. Jeanne-Claude Strong and her team, Seve Jarvin, Marcus Burke and Kate Devereux from Royal Sydney Yacht Squadron had been observed pairing up to some training with regatta leaders Magpie (GT) and his crew form Mornington YC before the start. Obviously the training was working as both appeared side by side coming down to the gate in the lead pack on the first lap.

The gate rounding was hectic with several boats abreast fighting for position at both marks. The second upwind was similar to the first with the majority of the fleet working up the inshore side with slightly better wave patterns. Mike Campbell from Royal Perth YC sadly lost a crew overboard and had to pull off the course to dry out.

Around the top for the second time and the two leaders split for a drag race to the finish. It came down to the last gybe but Peter Chappell and his crew, Graeme Johnson and Luke Payne just managed to pip Graeme Taylor’s Magpie to the line by a boat length to the applause of the local spectators. 3rd was Jeanne-Claude Strong and 4th, another Sydney based boat, Ciao sailed by Douglas McGain, Michael O’Brien and Anthony Nossiter from CYCA. The whole fleet finished within around 5 minutes showing how much more congested the racing had become.

Race 6 was started just after noon as the wind cranked up another notch up to the late teens with gusts of 19 knots and still a confused swell.

Another very close start under U flag with the majority of the lead boats towards the pin end. Magpie (Graeme Taylor) had a peach of a start to poke his nose out in front off the start line.

The first upwind leg followed the same pattern and sure enough round the top mark it was training partners Graeme Taylor and Jeanne-Claude Strong side by side setting the pace, this time closely pursued by the Queensland crew of David Turton, Josh Torpy and Klaus Lorenz from RQYS/MYC.

The run was an even split and ended up with a very tightly packed gate rounding and some frantic kite drops. Upwind for the final time and the breeze was just starting to build again for the afternoon surf session. Magpie appeared to round the top mark in the lead but again it became a drag race downwind between Graeme Taylor and Jeanne-Claude Strong, the white spinnaker verses the red spinnaker. The two came together on opposite gybes and it appeared Jeanne-Claude had the upper hand gybing back inshore of Graeme. Just before the finish with 100m to go it would come down to the last gybe when Graeme soaked down inside Jeanne-Claude taking the wind out her sails then gybing away on to port gybe to steal a boat length on the finish line. (See the drone video on the facebook link below for a replay.)

Neville Wittey, the coach for Graeme and Jeanne-Claude was overheard to remark that he was slightly concerned they might take each other out on the final gybe!

Jeanne-Claude sums it up: “We often train with Magpie and it's really a privilege to train with such top yachtsman. I think every lit bit helps, actually I love training as much as racing, put me on the water and I am happy.

“The last race of the day came down to the last gybe, it certainly was a bit close, I tried to have a gybe but it just wouldn’t quite happen so then I had to have another go but we missed them! They did a great job, we were pretty close together all day.

“Really great conditions today, nice breeze, the waves are great, it will be a tough final day tomorrow but we will be in there trying.”

Mid fleet the vast majority of the pack crossed the finish line in groups of three boats abreast providing a great spectacle for the watching fans aboard the spectator boat.

As the discard comes into play after 5 races, Graeme Taylor’s Magpie team has one hand on the trophy with a lead of 10 points with 2 races to go on the final day. Michael Manford and his crew from RFBYC in Perth had to use up his discard (13th) but with a 4th in race 6, holds on to second place overall by a small margin of 2 points. David Turton and his crew of Queenslanders are now tied on points with Jeanne-Claude Strong on 20 points as Martin Hill and his Sydney based crew slips to 5th overall.

Another day of great racing with only one retirement due to a swimming incident shows just how close the racing has become in this fleet. The final day of racing (Friday) is scheduled for a 1035hrs start (local time) and racing will again be streamed live via the facebook site in the link below.