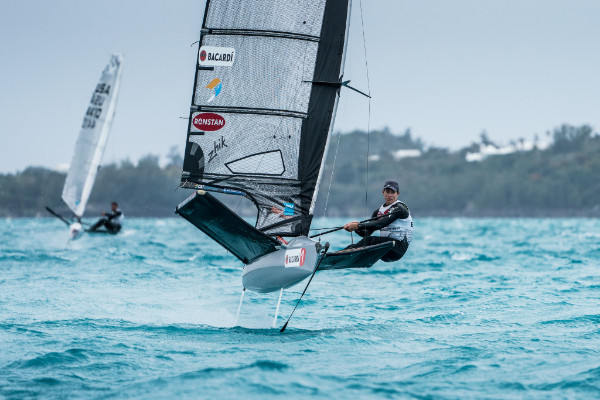 HAMILTON, Bermuda — Paul Goodison of the U.K. took the early lead at the Bacardi Moth World Championship in Bermuda after winning the first two races on Great Sound.

Hosted by the Royal Bermuda yacht Club, the world championship got underway a day late after yesterday was blown out. Today was on the hairy edge as the wind blew steadily between 18 and 22 knots with gusts nearing 30 knots. The conditions were challenging for the sailors but left some exhilarated.

“The conditions were on the edge, pushing everyone to the limits of what’s possible in the Moth,” said the 40-year-old Goodison, the two-time Moth world champion. “But it was fantastic. So many guys were rocking around with big smiles.”

“It was super windy and pretty hairy, but the water was flat enough to get around the racecourse,” said Victor Diaz de Leon of the U.S., unabashedly the shortest sailor in the fleet. “I’ve sailed in those conditions before but it’s rare. The Moth often makes you scared, but it’s fun when you’re scared. It was a blast.”

“After the first start the breeze built from fresh to frightening,” said Irishman Dave Kenefick. “It’s the windiest I’ve ever sailed a Moth in and I’d prefer not to do it again, but I got through unscathed.”

The conditions exacted a toll on the fleet. There were broken masts, broken rudders and broken controls. Although unscathed, Kenefick wasn’t without problems.

“I had a big pitchpole just before the start of Race 1 and ripped the cleat for my ride-height control line right off the deck,” said Kenefick, who holds 13th place overall with 30 points. “I had to stop during the first upwind leg and tie the line off and I limped around the course for both races.”

Goodison didn’t suffer any breakdowns today but one of his main rivals, Iain Jensen of Australia, did. Jensen led Goodison around the first lap of Race 1, heightening the intrigue as to which of the veteran Mothists is faster.

On the second upwind leg, however, Jensen’s boom vang (the line that controls the height of the outboard end of the boom) broke. He managed to salvage a fifth in the race but then missed the second race because he returned to shore to make a repair in the hopes of returning for the third race. By that point the wind had increased and the race committee decided to postpone the rest of the day’s schedule.

“We had a good race going in the first one,” said Goodison of his duel with Jensen. “We were about the same at the first windward mark. I just got past him on the run and then had a bit of a splash down and he got past me at leeward gate. I didn’t see what happened to him on the next upwind leg, but after that I sailed pretty well.”

The course axis for both races was set at 330 degrees at a length of 1.1 nautical miles. In each race the fleet mostly took to the left side of the course. While it seemed like the water was flatter on that side, the decision to go left was out of a desire to minimize maneuvers.

“When it’s so windy, the fewer tacks the better,” said Diaz de Leon, who holds fifth overall with 10 points. “People were mostly thinking start and go to the layline. It’s risky to tack because you don’t want to flip, and a lot of people were flipping.

“I felt good about my tacking today,” Diaz de Leon continued.” Most of my tacks were pretty nice and I think I made big gains. When you’re small you have to have good boathandling to go as fast as the big guys.”

Racing is scheduled to continue tomorrow with a forecast that calls for winds of 12 to 20 knots.