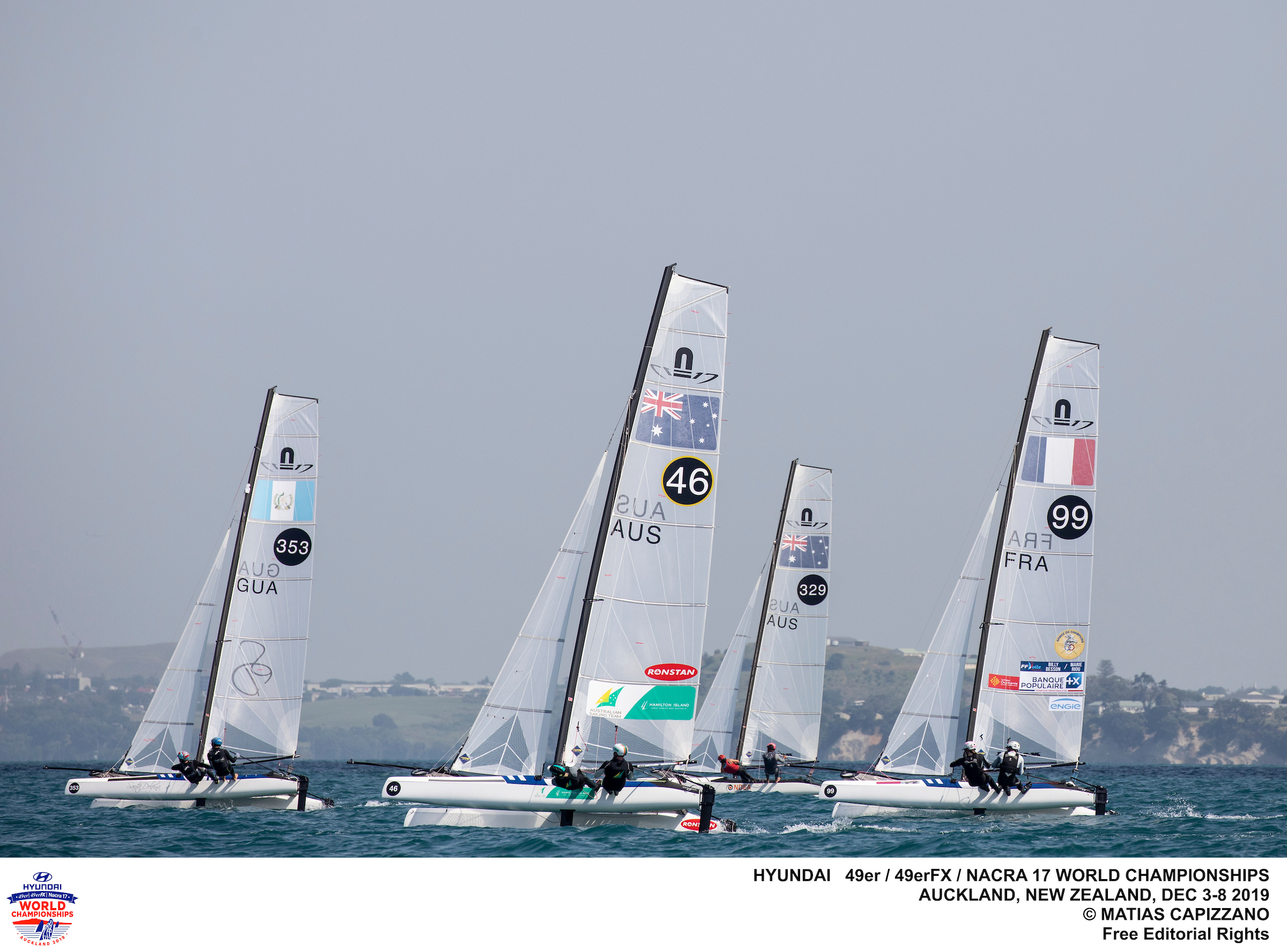 A battle royale is brewing between high-flying Aussie sailors in the Nacra17 Class at the 2019 Hyundai 49er, 49erFX and Nacra 17 World Championships in Auckland.

Both crews are playing down the rivalry and concentrating on their own performances.

“Nothing really changes,” said Jason. “It’s all about consistency. This is where you see a lot of teams blow their points wide open and we are planning not to do that.”

Consistency is the key – Jason and Lisa enjoying a first and three fourth placings today while Nathan and Hayley finished 3,2 1.

“We’re just enjoying the racing at the moment to be honest”, said Jason. “Try to think about it a bit too much and you put too much pressure on yourself. But right now we are sailing well and trying to improve every day and tomorrow’s no different.”

So how much of an eye do they keep on the opposition?

Jason: “Right now none. We have a philosophy that we don’t look at the points score really until the race before the medal race.”

It’s a similar philosophy in the Outteridge camp.

Nathan: “There’ll be an eye out for 24 other boats. Every single boat is our problem at the moment. Obviously the goal for us is to get selected but there’s no point in being selected and not being podium-worthy. Our goal is to be on the podium here.”

And like Jason, Nathan is also enjoying the racing; “Honestly I think we are just getting more comfortable in the boat as each event goes by.  I think our upwind pace today and yesterday was really good.

“So as soon as you are comfortable with the boat speed and the set up and your sailing skills your eyes come out of the boat and you start to see the bigger picture. Last few days we can actually observe what’s going on around us you know. We are getting probably 80 per cent of the shifts right which is good.”

Game on in the Nacras. But first out today were the 49ers who got what they were expecting with a light north easterly sea breeze of eight to ten knots.

These proved to be ideal conditions for Aussies Jim Colley and Shaun Connor who revelled in the light airs and reeled off a 14th, 1st and 3rd to climb into 10th spot on 50 points.

They are just one point ahead of the Phillips brothers, Will and Sam, who found the going tough.

“It was a grind today because the conditions on our course were very unpredictable,” said Will. “So we were just trying to hedge either side and figure out the best way around the course as we went because it wasn’t obvious from the very beginning.”

In the end they came away with an eight and two elevens. “We ended up I think with some results that weren’t that bad and we were probably pretty happy with that because it could have been a lot worse.”

More importantly it was enough to qualify the brothers for the gold fleet into which they’ll carry the lessons they’ve learned in the regatta so far.

“The main take away is that we are pretty comfortable with our speed,” said Will. “That’s a really useful tool that we can carry into the next regatta because it means we don’t have to do anything too over the top, don’t have to roll the dice too hard.

“We can just hang in and see if we can hold onto results rather than try to make things happen.”

The other Aussie brothers also did enough to progress. David and Lachy Gilmour well aware that consistency is the watchword, but acknowledging that it is easier said than done.

For the Aussie FX sailors the Gold Fleet has remained elusive but Natasha Bryant says there is a plan.

“The plan is to learn as much as we can from this regatta because it’s really great that we have two Worlds so close to each other. We want to come back as strong as possible for Geelong and see where we can go,” said Tash.

And the learning will continue in the City of Sails this week with a clear objective: “Make the most of these last few days in Auckland,” Tash added. “It’s great racing and the fleet is really high standard all around, so it’s going to be tight racing still and we’ll just have to make the most of it.”