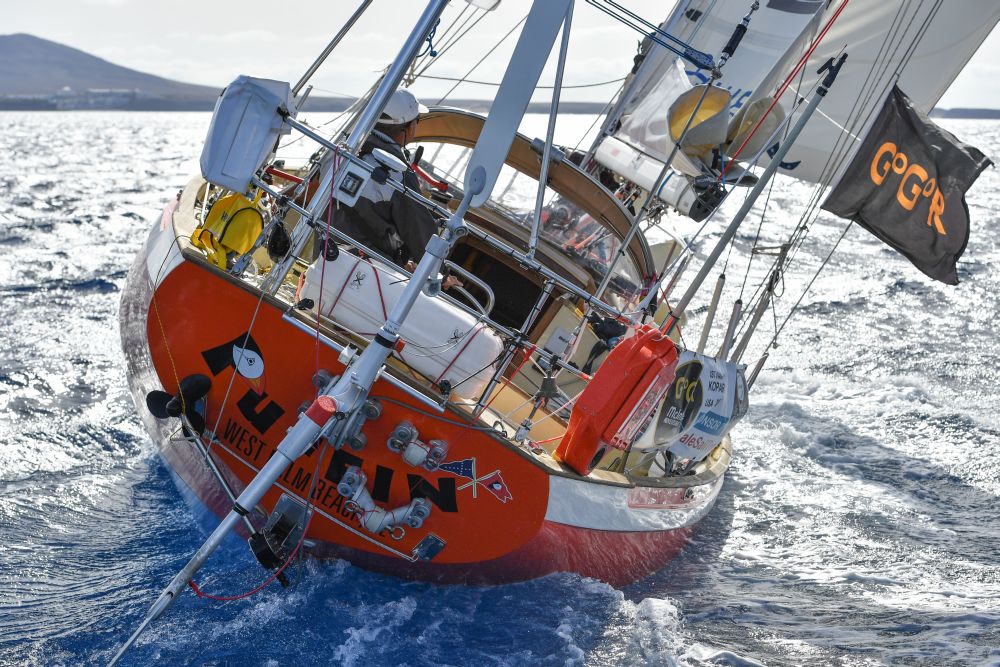 As the leading trio of Philippe Péché, Jean-Luc Van Den Heede and Mark Slats position themselves to cross the Doldrums, the dramas continue at the back of the Golden Globe Race fleet. Nabil Amra, the US based Palestinian sailing the Biscay 36 Liberty II formally announced his retirement from the race today after reaching Tenerife overnight. Fellow American Istvan Kopar has also announced that he intends to stop in the Cape Verde Islands to replace the self-steering system on his Tradewind 35 Puffin and join Frenchman Antoine Cousot in the Chichester Class for those who are forced to make one stop during their solo circumnavigation.

Cousot stopped in Lanzarote on Sunday complaining that his WindPilot wind vane steering could not control his Biscay 36 Métier Intérim, but after two days in port it became clear as he left Marina Rubicon on yesterday that his decision to drop down to the Chichester Class, was as much mental as mechanical.

In a candid interview with Race Organisers, Cousot said: “I needed the break just to relieve the pressure. It was important for me mentally to make sure that everything is working… And it was good to have a hamburger and a beer!

“This is a personal challenge – a huge adventure. You have no idea, even reading Moitessier’s book and those of other singlehanders, about what it is like being alone. They talk about the sea and the environment, but they don’t talk about what is going on inside.”

As Métier Intérim set out to sea again late yesterday, Race Director Don McIntyre observed. “At the end of the day, the wind vane issue was important, but Antoine had all the parts onboard and simply replaced a couple of bolts that had fallen out. No extra parts were brought onboard during his stay. There were also a few electrical issues, but this was more a decision by Antoine to stop, regroup and think about what is going on.”

Cousot had planned to restart yesterday morning, but then lunch got in the way followed by an afternoon siesta, and he finally relinquished his ties to dry land at 17:00.

Istvan Kopar reported similar issues with his WindPilot self steering as he passed through the Marina Rubicon gate on Sunday but elected to continue south. Yesterday however, he messaged. “A lot of manual steering & cursing rough seas.” Later, he informed Race HQ that he had decided to head to the Cape Verde Islands and replace his self-steering system for another brand, a stop that will drop him down to the Chichester Class, leaving just 12 of the original 17 starters competing in the Golden Globe Race.

Nabil Amra, who reported on Monday that a weld had broken on his Beaufort wind vane self steering, has made the decision not to continue. As he battled his way across 35knot winds en-route to Tenerife, the Palestinian messaged: “Wind and waves in the teeth…Sailing is better with friends.” This was followed by: “Violently ill now.. No sleep for 4 days.” It is clear that he has had enough… for now.

Back at the front of the fleet, Jean-Luc Van Den Heede has moved up to 2nd place and reduced fellow Frenchman Philippe Péché’s lead to 24 miles as they and Dutchman Mark Slats position themselves to cross the Doldrums, the area of calms that divide the North East and South East trade winds. Péché’s Rustler 36 PRB is nearest to the Senegal coast, Slats (Rustler 36 Ohpen Maverick) who caught a tasty tuna today – his first fresh meat since the start – is enjoying stronger winds close to the Cape Verde Islands and Van Den Heede (Rustler 36 Matmut) is running a median course between them.

The remainder of the GGR fleet is now spread 500 miles astern but a close fight is developing mid fleet with just 47 miles dividing Susie Goodall (Rustler 36 DHL Starlight) now back up to 5th and 9th placed Uku Randmaa (Rustler 36 One and All).