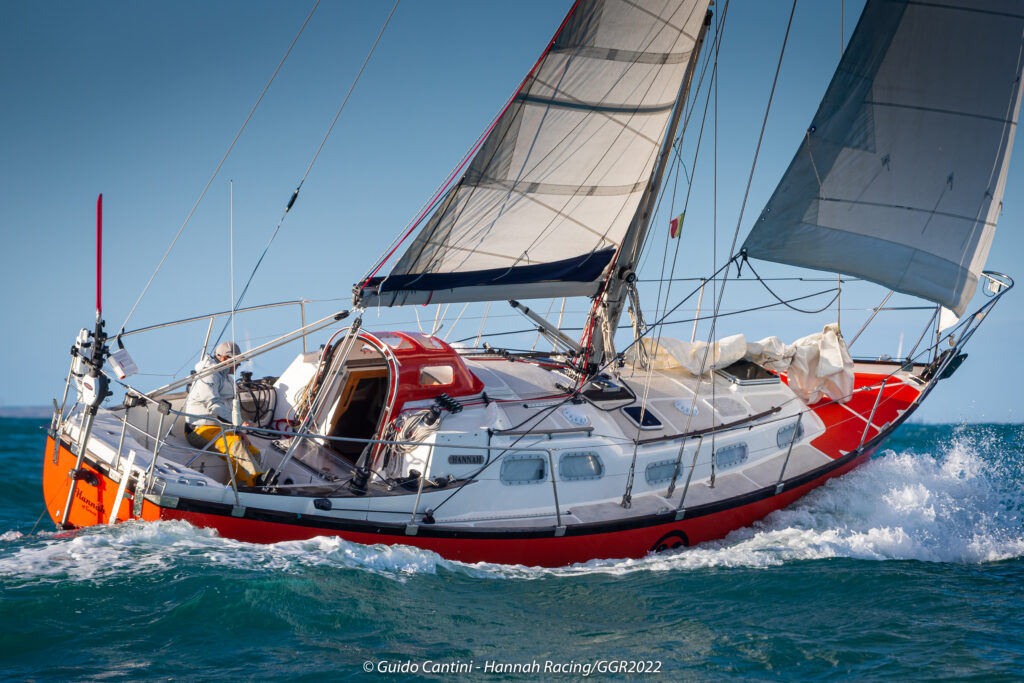 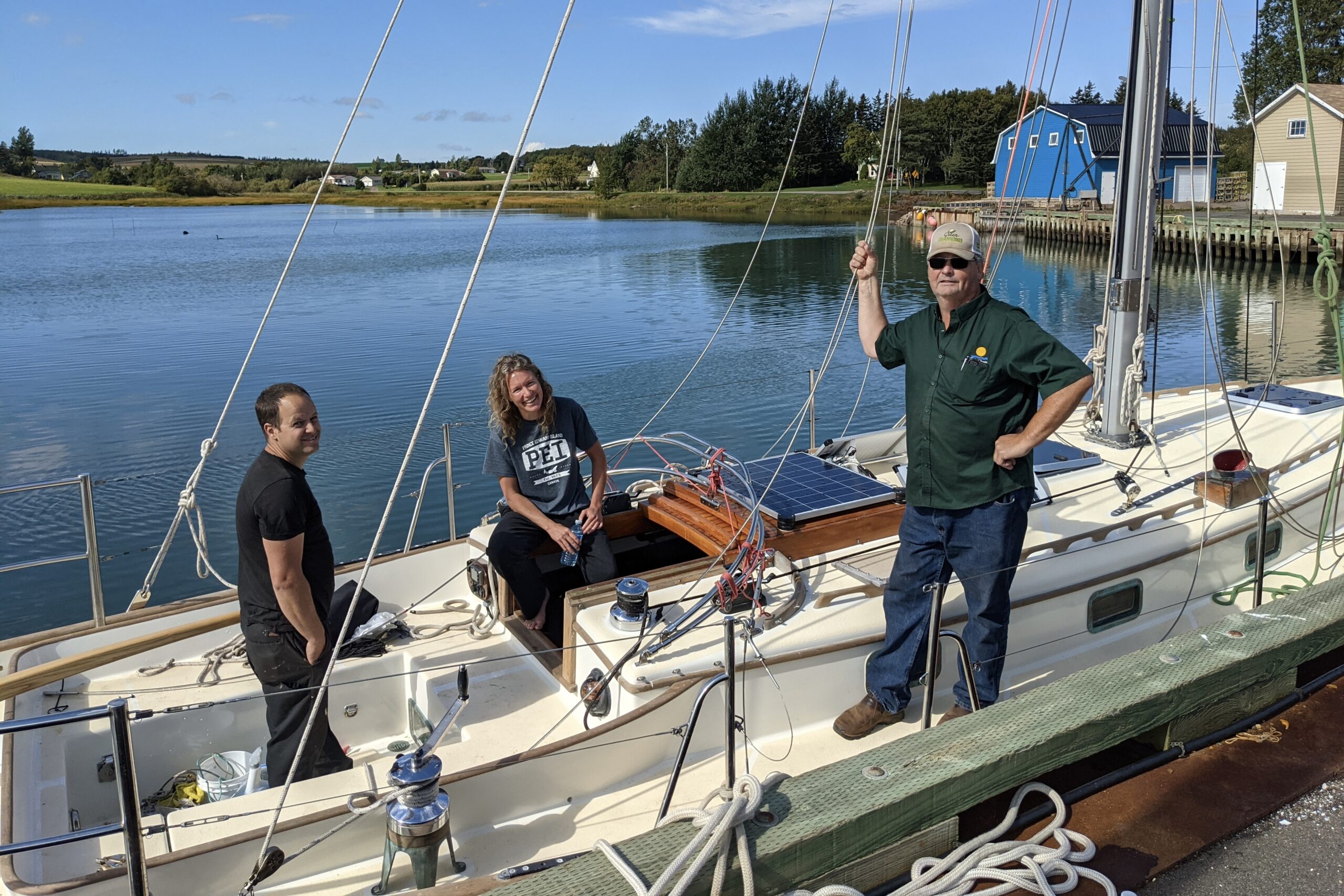 South African Kirsten Neuschäfer, the only woman in the Golden Globe, recently completed her 2022 Golden Globe Race refit in Prince Edward Island, Nova Scotia, Canada, and is about to arrive home in Cape Town after an 8,000-mile solo non-stop sea trail, before heading 6,600 miles back to France.

On September 4, 2022 the third edition of the Golden Globe Race will start again from Les Sables d’Olonne, France.

Kirsten is a professional sailor, with over 200,000 miles of ocean experience, working with Skip Novak in remote, often hostile places in the Arctic and Antarctic. She chose the Cape George 36 design due to its long waterline, stability, seaworthiness, and generous rig. She discovered it in Canada. She had planned to bring the boat to Maine (U.S.) for refit, but Covid restrictions made that trip impossible. By chance, she found incredible support from the Prince Edward Island community, including local tradesman Eddie Arsenault, who managed the refit, rebuilding Minnehaha for the gruelling race ahead.

“I came as an outsider to Prince Edward Island. From the moment I arrived, I’ve only been treated with such kindness and generosity,” Kirsten said. “People in the community have taken a genuine interest in this project.”

With the one-year refit completed, she set sail towards South Africa in early December 2021, crossing the Equator just before the New Year, then rounding Trindade Island to port and sailing the GGR 2022 course towards her homeport of Cape Town. This 8,000-mile voyage brings immense knowledge of her boat and huge gratitude in her heart, for her new friends in Canada.

Kirsten will arrive in Cape Town in the next few days and stop for just a few weeks to say “HI!” to family, friends and to check on sponsors with her team. She then sets sail on another solo, non-stop, 6,500 miles voyage, to the start in Les Sables d’Olonne, France. Kirsten will be a sailor to watch! She is at one with the ocean, as was Jean Luc VDH, winner of the 2018 GGR.

Australian Oceanographer Mark Sinclair is about to round Cape Horn sailing his Lello 34 Coconut halfway around the world, in order to finish his 2018 GGR. He set sail from Adelaide on December 5 2021, bound for Les Sables d’Olonne, officially re-joining the GGR 2018 edition. Previously, he had to stop in Adelaide after completing only half the Race.

The 2018 GGR had no finishing time, and Mark only made the one-stop, so can re-join under the Chichester Class. Mark has also entered the 2022 Golden Globe, so this return voyage adds a wealth of Southern Ocean experience and also brings him and his boat to the start of this third edition. He will be a strong contender to finish the 2022 edition.

“I am first and foremost a mariner, so my number one objective is not to be rescued and get around under my own power,” Mark Sinclair said. “I will be more competitive in the next Golden Globe, having built huge experience and faith in my trusty little Coconut.”

The final Golden Globe Entrants Conference has been scheduled for March 9 / 10, in Les Sables d’Olonne. It was hoped all 25 entrants around the World would assemble together for the first time, but COVID restrictions mean only 12 will be present. It is an important meeting of minds, full of passion, and marks the final countdown to the start just six months later. All entrants are either trying to complete refits and get sailing, or are currently out sailing and gaining important sea miles.

As a minimum, entrants must have at least 8,000 ocean miles and another 2,000 solo sailing experience, followed by a final 2,000 solo miles in the boat as set up for the GGR, sailed with windvane and sextant only.

“The pressure is building for a few entrants as start day gets closer, and COVID challenges have delayed refits, increased cost and made sponsors harder to find,” Race Founder Don McIntyre said. “We’ve seen a few entrants retire in the last six months, and I think there will be a couple more soon, but that’s the reality of the Golden Globe. Getting to the start is half the battle!”

Lutz Kohne, 25, from Germany joins the GGR team in Les Sables d’Olonne and has been appointed Assistant Race Director. Lutz is an experienced sailor and Yachtmaster, and has worked on several events with McIntyre Adventure last year. He will liaise with the skippers and their teams on safety requirements and all compliance issues, leading to final safety inspections prior to the start. He will also provide German commentary during the Race. As the GGR team strengthens, the organizers are working to further improve coverage for the GGR 2022 and bring to the French and international public, new and exclusive ways to share the spirit of the Golden Globe.