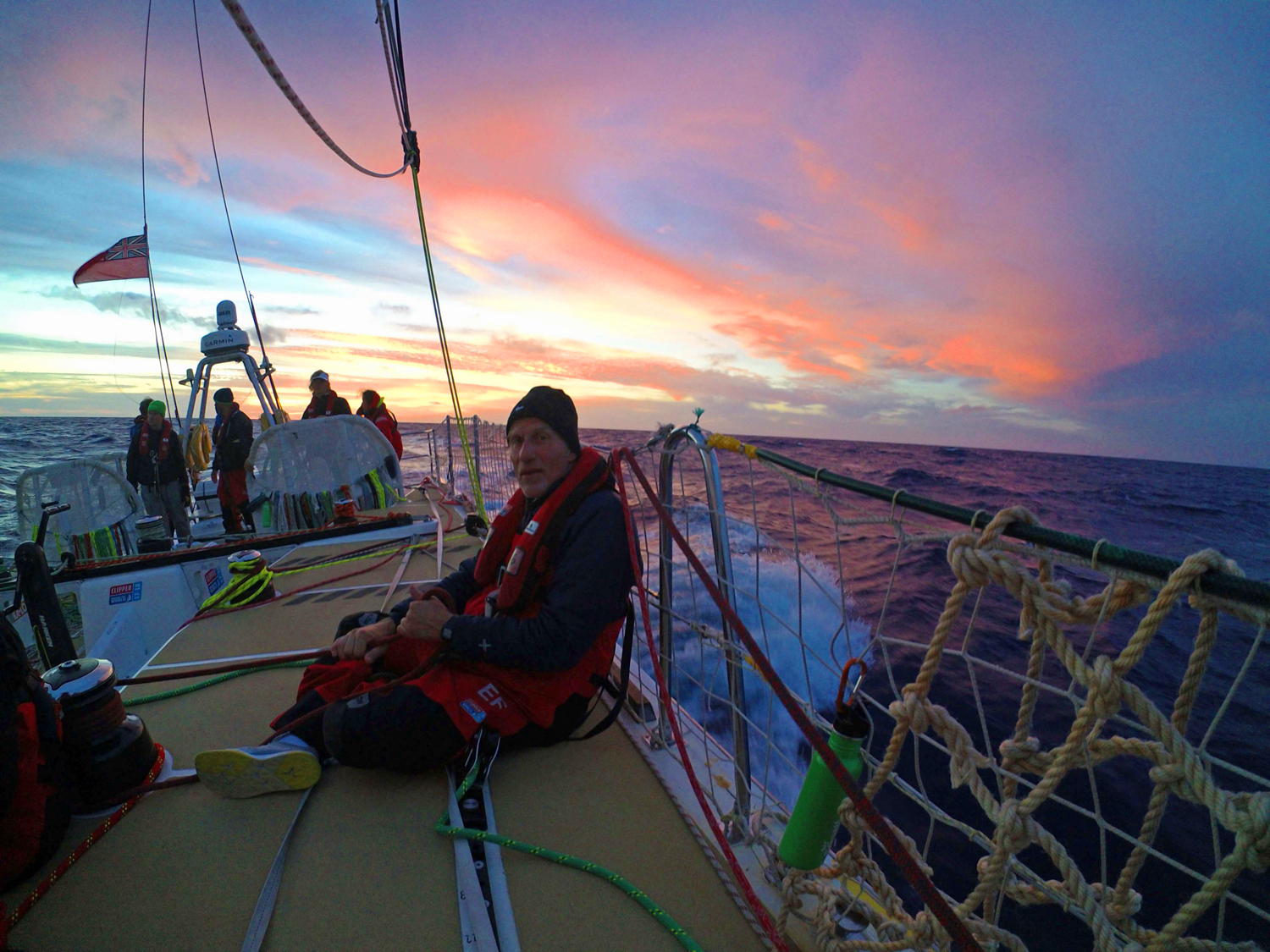 Tiredness and excitement in equal measure.

Although the Elliot Brown Ocean Sprint divided teams, with some opting to sprint away from the best course in the hope of getting some bonus points and others focusing instead on leaderboard positions and the upcoming scoring gate, the main source of frustrations remains with spinnakers as PSP Logistics, HotelPlanner.com, Unicef, Dare To Lead, Sanya Serenity Coast and Liverpool 2018 lost ground during repairs.

Unicef Skipper Bob Beggs reports: “Without our Code 2 (mediumweight spinnaker), which needs to be repaired ashore following a fail during the Le Mans start, we abandoned any hope of succeeding in the Elliot Brown Ocean Sprint and decided to gybe to the east to favour the course rather than the sprint.

“We have been struggling to keep up with our trusty Code 3 (heavyweight spinnaker), but now the weather is within the wind range that we are prepared to fly our Code 1 (lightweight spinnaker) and hopefully conditions will stay light.”

It is a similar story on board Visit Seattle and Sanya Serenity Coast, which both suffered at the hands of spinnaker wraps. Sanya Serenity Coast Skipper, Wendy Tuck, comments: “I'm kicking myself now, though, as we talked about the Elliot Brown Ocean Sprint and how we didn't think it would be worth doing as we would be sailing into lighter breeze, but what with the wrap and getting good speed we got caught up in the moment and didn't gybe.”

“We are now a lot further east than I would have liked to be and have lost heaps of time on other boats.”

However, Garmin and Dare To Lead both stuck to the sprint, a decision which Dale Smyth, Skipper of Dare To Lead, is hoping will pay off in the long run: “We seemed to suffer a bit in the standings because of the commitment to a short sprint and you will maybe have noticed that we dropped from third to fifth place.

“We are currently now trying to claw back our race position and hope for the best that our sprint result was worth the sacrifice.”

The only team which has so far remained unscathed is Qingdao which is storming ahead of the pack after it shifted focus from the Elliot Brown Ocean Sprint to the scoring gate. Skipper Chris Kobsuch explains: We decided to give the Elliot Brown Ocean Sprint a miss and gybed yesterday to gain some miles towards the scoring gate and the finish line. So far it seems to have paid off with the next closest boat over 40nm behind us.”

Despite creating the 40 nautical mile (nm) advantage over second paced Visit Seattle, Chris and his team are not getting complacent. All too aware of the nature of ocean racing, he adds: “Hopefully the breeze will stay with us for the next two or three days, so we can sail all the way to the scoring gate without stopping dead in a wind hole and the rest of the fleet catching us.”

With different tactics at play and frustrations across the pack, the outcome of the Race 10 Elliot Brown Ocean Sprint could throw up some surprises once all teams complete it.

Looking ahead, the fleet is setting its sights on the Race 10 scoring gate which is some 350nm away from the leading team, Qingdao, which has appeared on the scoring gate leaderboard more frequently than any other team. According to Clipper Race weatherman, Simon Rowell, the breeze is set to become lighter and more variable from Thursday, so teams will be pushing to have the scoring gate in their grasps in the coming 48 hours.

The race to Panama is expected to take approximately 23 to 26 days, with the fleet expected to arrive between 23 – 27 May.