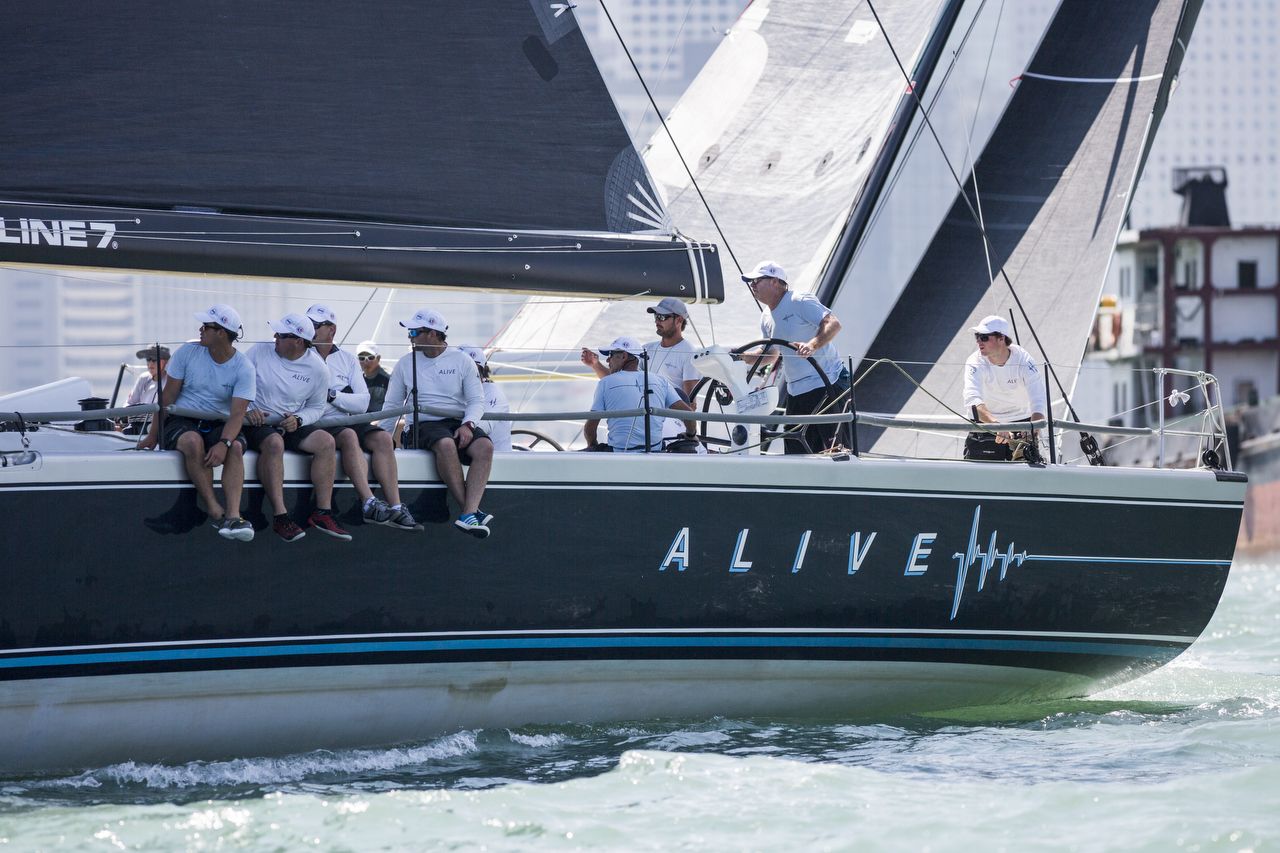 A beautiful day in Hong Kong harbour with blue skies and a north easterly breeze of 10kts for the start of IRC Racer 0 and 1 in the Volvo Hong Kong to Vietnam Race. 10 boats were on the start line with the IRC Racer 2 division setting out 25 hours earlier. The horn sounded at 1320hrs – a few minutes late due to a boat hooking the pin end of the line before the start. All boats had a great start and got away cleanly.  It was a bit of a tacking battle after the line as many boats stuck to the right side of the harbour to avoid marine traffic and exclusion zones.

As the fleet progressed up the harbour it was a game of staying in pressure with Matteo Savelli’s Cookson 50 Mascalzone Latino leading the fleet until Lei Yue Mun gap where she got stuck in a hole and Phillip Turner’s Reichel/Pugh 66 Alive pulled ahead and subsequently was the first boat through the gap and to stretch out on the horizon.

Alive, the 2015 Hong Kong to Vietnam IRC 0 winner, is expected to take Line Honours ahead of the largest boat in the fleet Geoffrey Hill’s Santa Cruz 72 Antipodes.  On board Antipodes is five-time Volvo Ocean Race Sailor, Matt Humphries as well as the only sailor to compete in every Hong Kong to Vietnam Race, Alan Tillyer. Also in the IRC Racer 0 division is the first China entry to take part in the Race, Wang Bin’s Cookson 50 Ubox. Ubox was the 3rd overall winner of the 2016 Rolex Sydney Hobart Race.

Leading the IRC Racer 1 division out of the harbour were arch rivals Joachim Isler and Drew Taylor’s Mills 41 Ambush and Fred Kinmonth and Nick Burns Sydney GTS 43 Otonomos Mandrake, Ambush took 2nd place in the 2015 Hong Kong to Vietnam Race with Mandrake taking the IRC Racer 1 win in the Volvo China Coast Regatta last week in Hong Kong. It will be interesting to watch the Yellow Brick tracker online to see who pulls ahead tonight.

Once out of the harbour the fleet will fetch towards the Soko Islands then pop their kites for the 673nm downwind thrash towards Nha Trang, Vietnam.