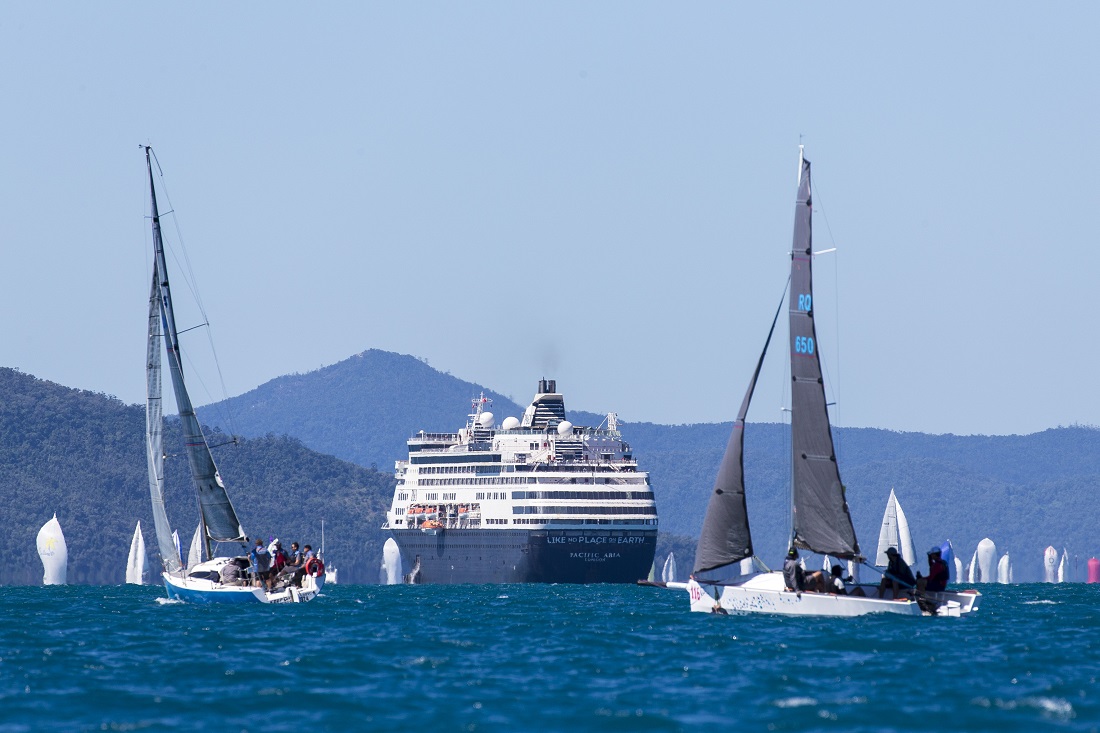 Cruising boats such as Eve, Vanilla 2 and White Swan are providing the glamour at Airlie Beach Race Week, the multihulls and today’s weather are the glitz factor, and in fact the entire 114 entries put on a stunning show in the Whitsunday Sailing Club’s (WSC) event today.

P&O cruise ship Pacific Aria treated her guests to something they will not forget. The ship was moored not too far from the start line of racers, with plenty of tourists out for a look.

The same at White Rock, where the crews of canoes took a break and sat back to enjoy the rock-hopping action as the fleet approached to windward and set spinnakers out the other side. At Daydream Island, visitors took advantage of the same experience, not to mention spectators on the water.

A magical day of sailing as winds ranged from 12 to 20 knots under sunny skies. Why would you be anywhere else?

Not all was hunky dory. Gerald Valk radioed that his South Australian Farrier F32, Crosshair, had broken her rudder. Meanwhile, Holy Cow shred her kite after rounding White Rock. There were other such tales of woe, but the majority had big smiles on coming ashore.

Once again, Multihull Division 1 boats, where the fast movers reign supreme, were home in time for lunch, a shower and a kip. Quenching their need for speed, the big cats tore up the course.

Paul Mitchell and crew on the local boat, Ullman Sails, got the best of the rest to take the gun. The Grainger Apex creamed his nearest rival, Pete Wilcox’s Stealth 12, Cosmo, by 13 minutes once the handicaps were applied.

Clay Matthews from Ullman Sails said they reached a top speed of 24.7 knots: “The breeze certainly suited us, but I think we made up time in the Bay (Pioneer Bay) and on the kite run. At the upper range the wind was 17 to 20 knots around White Rock and the Molles (Molle Islands) before it dropped off,” he said.

Matthews said they averted what could have been an unpleasant incident. “It’s always nice to avoid a whale on the course. This one was at the back of the Island – it jumped out the water, so we could at least see and avoid it.”

The sailor said the crew awarded Aaron Linton ‘Man of the Match’ on Day 3. “He put us in the right place on the start line and called the tactics that put boat in the right places all day, which obviously contributed to our win.”

In the Trailable Yachts, local, Thomas Jordan, made the best of the start with a quick getaway at the pin end with his Ross 780 MK1, Lunasea. However, Jordan could not translate it to a win. Instead, it went to another WSC member, Tom Vujasinovic with Masquerade, a Masrm 750.

Marcus Blackmore’s second today has put his TP52, Hooligan (NSW), in the top spot on the leaderboard, when David Currie’s modified Farr 40, Ponyo, put a cat among the pigeons by winning IRC Passage Race 3 today.

The Victorian entry revelled in today’s conditions and Currie was pleased with the bullet that has lifted him up into third place behind a second TP52, Gordon Ketelbey’s Zen (NSW).

“A bit of a shock, but sometimes the luck runs with you,” Currie said. I think the leading boats fell into a hole at the Bluff mark. We sailed consistently well. We could always see them, but they looked a hell of a lot closer until the Bluff. They didn’t have enough time to come back and beat us.”

Following a second place today, Jenni Maclean and John Coppock have sailed Hotel into the overall lead of Cruising Division 3. Maclean, a board member of the national sailing body, Australian Sailing commented, “We had a beaut day out.

“What we did differently to the rest of the division was go across the channel to north Molle and track down to West Molle. We surprised ourselves when we found we were second boat in our division there. Today was good conditions for our Beneteau Cyclades 43.3, because it’s a heavy boat.

“Our crew worked well together; the kite hoists and drops went well. We had a good tussle with Out of the Blue (Stephen Green’s Dufour 40 which is now in second place overall) from the Bluff. They had their eyes on us and we had our eyes on them,” the Victorian sailor said.