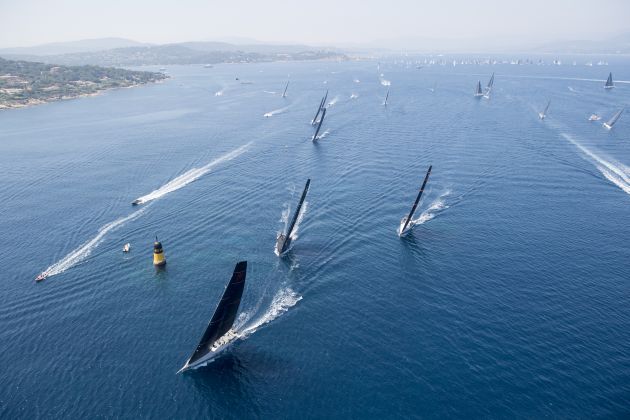 The start of the Giraglia Rolex Cup. Photo supplied.

Saint-Tropez – 14, June 2017. At 12:45 today an international fleet of 209 yachts commenced the 65th running of the Giraglia Rolex Cup. Departing from Saint-Tropez, France, their destination is the historic port city of Genoa, Italy with 241-nautical miles of tactically challenging sailing in constantly shifting weather patterns lying ahead. On route to Genoa, the fleet will round the race’s symbolic landmark, the Giraglia rock, located off the northern tip of Corsica.

Following a sunshine start under a consistent 6-8 knots of wind, the early stages of the race went to form with the three Maxi 72s leading the fleet and picking up good speed as the breeze built on the passage to La Fourmigue. Alex Schärer’s Caol Ila R, top performer in the week’s inshore series, Sir Peter Ogden’s Jethou from the United Kingdom, and Dieter Schön’s German entrant Momo, optimized specifically for offshore racing, are set to dominate the front of the race.

Schärer identified the Giraglia rock as a key juncture in the race. Ogden was in agreement: “It is important to round the rock before the wind dies. After that we will look at the forecast and choose the best route to Genoa.”

Processing the latest weather data on the docks this morning, navigators were largely in agreement that the 2017 race will be dominated by lighter conditions notably on the final leg from the Giraglia rock to the finish line in front of the Yacht Club Italiano clubhouse in Genoa. “You can divide this race into lots of small sections,” explains Gérald Véniard, French navigator/tactician on Wallyño, someone who relishes the persistent challenges the Giraglia Rolex Cup offshore race presents. “It’s the weather which will determine the technical difficulty of each part. The Mediterranean is very unique, with weather patterns which are not always kind. The wind can pick up and then drop very quickly. This capricious nature gives every boat its chance.” Matteo Capurro, tactician on Adriano Calvini’s Itacentodue believes the race will demand a lot of energy and crew resources. “It will be very hard because of the constant changes in wind intensity. To make sure you have the right sails at the right time is hugely important.”

The weather, and how successfully crews are able to adapt tactically and navigationally to changing situations, plays a significant role in determining the overall race winner, decided on corrected time, and theoretically within reach of any yacht in the fleet. The race’s democratic nature is reflected in the diversity of the recent winners – last year Frenchman Gilles Pages helmed the Corinthian-sailed 36-ft Tip to success while in 2015 Sir Lindsay Owen-Jones’s cutting-edge Wally Cento Magic Carpet Cubed claimed the race’s main prize.

The frontrunners were forecasting arrival at the Giraglia rock at around sunrise on Thursday morning and arrival in Genoa later that same day or in the early hours of Friday morning.

Live tracking of the fleet can be found at www.giragliarolexcup.com