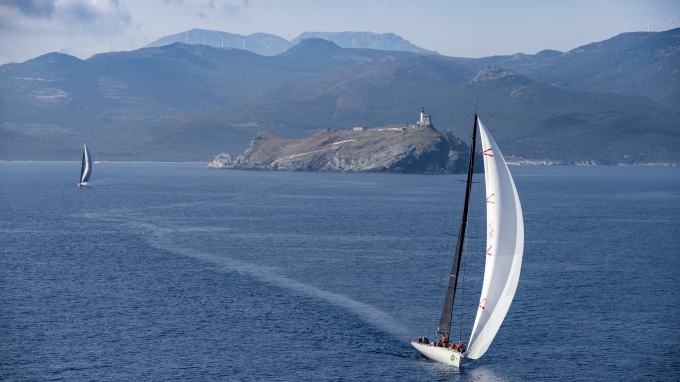 Genoa: Patience, mental fortitude and an unrelenting desire to surmount the challenges posed by fickle conditions defined the racing at the 2017 Giraglia Rolex Cup.

Frecca Rossa’s success followed that of Momo. Dieter Schön’s Maxi 72 from Germany winning the race’s line honours crown as fastest finisher. Their fine exploits were rewarded with Rolex timepieces at the final prizegiving held at the Yacht Club Italiano’s base in Genoa on Saturday morning.

In the absence of a 100ft Maxi on the start line in Saint-Tropez, the quest to win line honours at the 2017 Giraglia Rolex Cup was set up for the crews of three competing Maxi 72s. Each had their own reasons to believe it could be their year.

Although a relatively short offshore race, the constant changes in weather patterns ensure the Giraglia Rolex Cup is always a challenging, complex affair. Making gains in the prevailing light conditions and avoiding parking in the various potential wind traps became the focus for the international fleet. This latter peril proved the downfall of Jethou’s ambitions, left motionless on the approach to the Giraglia rock, and dropping out of contention.

This left her rival Maxi 72s to engage in a fascinating head-to-head from the rock to Genoa, exchanging the lead on a few occasions before Momo assumed control of the race with some 30-nm to go.

Even at that late stage the crew remained vigilant, taking nothing for granted given the notorious reputation that the approach to Genoa has earned over time. Momo eventually crossed the finish line on Thursday at 21:39.04, in an elapsed time of 32 hours, 52 minutes and 4 seconds, a mere eight minutes ahead of Caol Ila R.

“It was only really won when we crossed the line,” explained crew member Chris McAsey. “We thought coming into Genoa we would park up. Luck went our way.”

Like McAsey, navigation specialist Francesco Mongelli was part of the crew on board Giacomo during her recent Rolex Sydney Hobart Yacht Race success. Mongelli pinpoints two crucial elements as key to success – crew work and preparation.

“We made some important decisions before the race related to the weather forecast, the sails and crew on board. You never know with a Mediterranean forecast whether it will be accurate but our decisions proved to be right. We never lost faith even in the moments when we were losing ground.”

In the spirit of sportsmanship which has always defined the Giraglia Rolex Cup, Schön was magnanimous in victory. “It was a long race, very interesting. The winds were very light. We had a great fight with Caol Ila. You need to be lucky at the end to cross the finish line first.”

Arriving in Genoa in the early hours of Friday morning, as the fifth yacht to complete the race, Freccia Rossa soared to the summit of the corrected time leaderboard. As the lack of breeze on the tricky passage from the Giraglia rock to the finish line continued to thwart the ambitions of those yachts still in contention, Freccia Rossa’s status as race leader became race winner.

“The Giraglia Rolex Cup is a great event and to win here is a fantastic feeling,” explained Yakimenko ahead of the final prize giving.

“There are always lots of boats, crews from all over the world. It’s full of positive emotion and also challenging. We have sailed together for a very long time, as a mix of professionals and amateurs. I am very proud of my crew. To sail together is always a great pleasure.”

The light conditions and changing weather patterns which defined the 2017 offshore race were a test on resources. For the body of the fleet, the race was a slow, ‘stop and go’ affair, more hours at sea, constant sail changes and a need for crews to find the marginal, incremental gains to propel themselves forward.

Finishing the race became an achievement in itself, a lesson in persistence and dedication. Many crews arrived in the hours shortly before the final prizegiving after over 60 hours at sea.

Nearly 250 yachts took part in the three distinct sailing segments of the 2017 Giraglia Rolex Cup, uniting both the latest thinking in yacht design and that which defined a bygone era.

Nicknamed the ‘magnificent racing animal’ in her heyday owing to her speed and unique stern design, Jalina, the winner of the first two races in the mid-1950s, took part in both the arrival race from Sanremo to Saint-Tropez, a precursor for the popular inshore racing in Saint-Tropez, and the offshore race itself.

On the race’s 65th anniversary her presence in the Vieux Port of Saint-Tropez was a symbolic one and an opportunity for owner Luciano Frattini, who acquired Jalina in 2007 after finding her in a ruinous condition, practically abandoned in Portoferraio on the Isola d’Elba, to recount the touching story behind her recent restoration.

“When we found Jalina it was a critical moment for the boat. Experts say if she had been left in the same state for another year she would have been unrecoverable. We spent years restoring the boat to her original 1946 design, using original sketches and old photos, because overtime she changed a lot.” Jalina’s presence in Saint-Tropez provided the opportunity to reflect on the gentle passing of time.

“The Giraglia Rolex Cup evolves,” explains Frattini, “there was a moment for Jalina and now for the magnificent boats who win today. However, in the heart of everything people like to turn back and admire. We came here to provide them with this opportunity. Somehow this race is Jalina’s natural environment.” On her return to the race which made her famous, Jalina finished in 63 hours, 15 minutes.