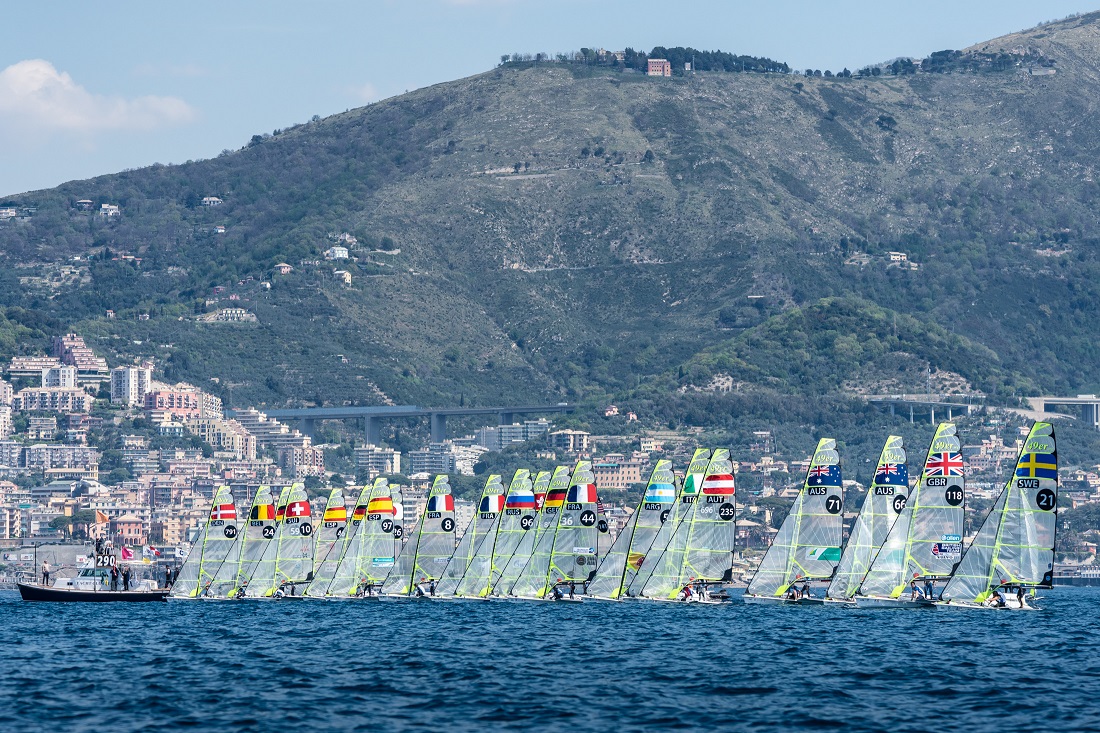 West Australian brothers David and Lachy Gilmour have maintained third place in the 49er class at the Hempel World Cup Series – Round 3, on a day that produced a little more breeze and diverse results for the Australian Sailing Team.

With five races now sailed in both Blue and Yellow fleets, the Gilmours scored eighth and 12th places, using the latter as a drop. Victorian siblings Sam and Will Phillips have moved up to 18th overall, courtesy of winning Race 3 in the Yellow fleet, their best result of the event so far.

Lachy said he and David have been a bit on the conservative side in their starts: “It’s difficult to start if you’re not at the right end of the line and be effective with it in light airs. All the good guys are desperately trying to be there, and the guys that did that today won.”

Starting their first race mid-line on starboard in a breeze that gusted to 6 knots, he commented, “It wasn’t a bad start, just not a race-winning start. The second start we had to do on port tack, due to congestion and bias on line. We wanted to avoid the congestion.

“We’re feeling really good with our boat speed though and confident how we are sailing with the boats around us. We made mistakes today that were costly on the downwind,” Lachy said.

“It was a longish day on the water, a lot of waiting, as we had to wait for Yellow fleet to finish before we could start. And as time went by, the breeze died down and was oscillating. We then waited 45 minutes at the end, as officials were hoping to get one more race in, but the breeze fizzled out.”

A noted 420, match racing and 49er skipper in his own right, Lachy says he and David joined forces this past year, “Because Dave came off last year’s European season feeling disappointed and it was felt changes needed to be made. I had just split with my crew and felt it was my best opportunity to go to the Olympics.

“I was pretty excited to team up with Dave. As brothers, we have our challenges, but there are benefits to it too. All three of us brothers (David, Sam and Lachy) like to skipper, so I had to step down from that, but I think it’s in our favour that both of us understand the skipper role,” he ended.

The brothers are a chip off the old block. Their father is Peter ‘Gilly’ Gilmour, an America’s Cup veteran and four-time World Match Racing Tour champion. Sailing is in their DNA.

Five races have been completed in the 49erFX. Tess Lloyd and Jaime Ryan are top of the three Australian teams, moving up to 27th place overall after finishing ninth in Race 5. Natasha Bryant and Annie Wilmot lifted up nine places to 33rd overall, after posting a 10th place in Race 4, while Amelia Stabback and Caitlin Elks dropped to 42nd after ending the day with a pair of 20th places.

Conditions at last enabled the 470 Men’s and Women’s to fit one race in, although winds were on the lighter side in the 3-4 knot range. Attempts to start a second race proved futile when the breeze died and racing was cancelled. Rio silver medallists, Mat Belcher and Will Ryan finished 19th, while Chris Charlwood and Joshua Dawson were 30th. Nia Jerwood and Monique de Vries finished 23rd in the Women’s.

In the Laser Blue fleet, where four races have now been put to bed, Luke Elliot’s day did not go as planned. He finished 24th and fourth before being disqualified for prematurely starting Race 4, which has been used as his drop. The Yellow fleet was only able to finish a third race, so overall results cannot be calculated.

Despite attempts, the Laser Radial class was unable to get a race in, so yesterday’s results stand.

Today’s racing schedule was aiming for three races each in the Laser, Laser Radial, 470 Men’s and Women’s, along with 49er and 49erFX Blue fleets, with four in the Yellow fleets to equal the number of races sailed by the Blue fleets. However, it proved to be a little ambitious and most classes are still behind schedule with one day of racing remaining before the first Medal Races on Saturday.

As forecast, a little more breeze in the 5 to 6.5 knot range arrived earlier in the day. The Laser fleets started racing just before midday local time. A short time later, the 49er and 49erFX Yellow fleets started, ahead of the 470s.

Taking into account General Recalls, Individual Recalls, starts under the Black Flag and abandoning races that hard started, officials did a good job to push through as many races as they could while the breeze held.

Racing at the Hempel World Cup Series – Round 3, Genoa, continues Friday local time and closes on Sunday 21 April with the final Medal Races.