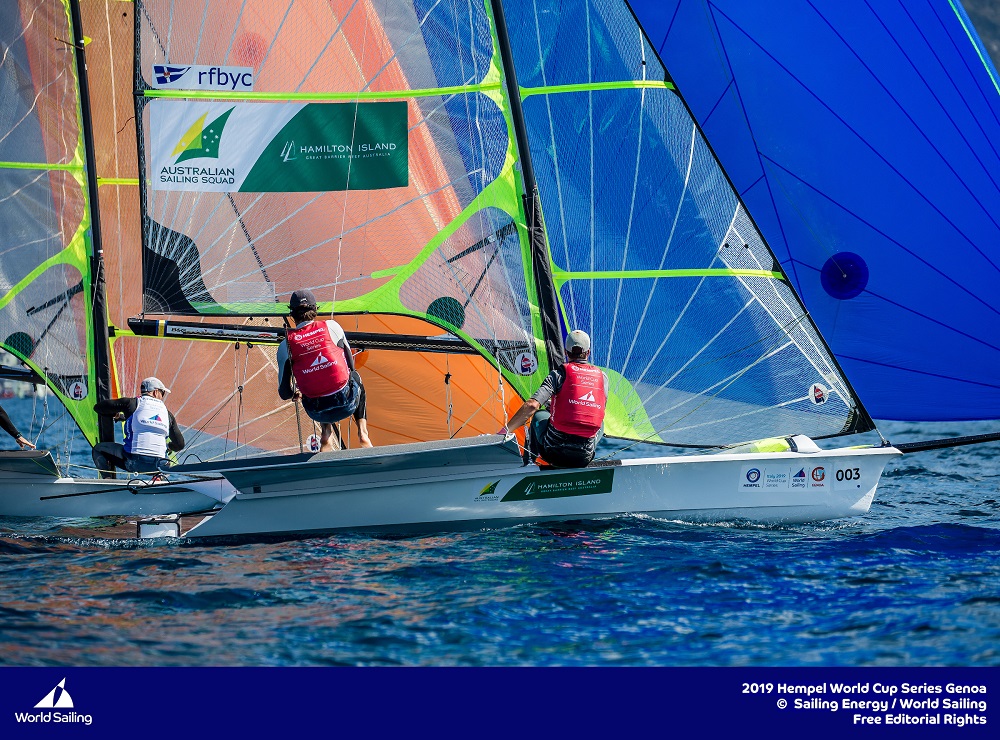 Day 5 at the Hempel World Cup Series – Round 3, Genoa provided the best conditions to-date, but the Australian Sailing Team had its struggles, including David and Lachy Gilmour who bounced back to claim the top of the 49er leaderboard.

Having sailed five races each, the 49er and 49erFX classes moved into Gold and Silver fleet phase today. At the end of day’s racing in Italy, the top 10 from each class progressed to Saturday’s Medal Race.

The Gilmour brothers came into the day in third place, but posted 33rd and 19th results, before mounting an incredible comeback with a win and a fifth to lead the Gold fleet from Rio gold medallists, Peter Burling and Blair Tuke (NZL).

“The first race we were last across the line and had to get into another head space,” Lachy Gilmour said.

“We sat down with our coach (Euan McNicol) after having a cool-off. We knew what we had to work on. We knew we had to get a lane and get clear; knowing our boat speed would do the rest. If you could get clear and not get caught in the cluster, it was a pretty good strategy. The second race we still had improvements to make, but by the third race, all was good.

“It’s absolutely a massive benefit being able to talk to Euan between races – and having four Aussie teams and the Australian Sailing Team as a whole to pinball information off each other. It’s a problem solving mechanism. Everyone is subtly trying something different and deciding what works and what doesn’t.”

Lachy said being on top “you know you are obviously doing something right and it is a confidence booster. When you’re not sure where the breeze is going to go, or trying to read shifts, you can at least trust your boat speed is there. We were in the front row of our starts, they weren’t the best, but they were solid and we were able to chip away.”

There were major catastrophes for some in the top half of the leaderboard today, Burling and Tuke’s was a 22nd in Race 9, while the third placed Brits scored a 21st in Race 8.

“In the Gold fleet you can’t afford mistakes as you’re sailing against the best in the world. If you hang around, you get hammered,” Lachy conceded.

The West Australian brothers go into tomorrow’s Medal Race in first place, with a six-point buffer over the New Zealanders and seven to the British pair of James Peters and Fynn Sterritt.

“We just have to go out there and race hard,” Lachy stated. Weather permitting, the 49er Medal Race is due to start at 11am local time Saturday.

Victorian brothers Will and Sam Phillips also made it into the Gold fleet, but did not start the day well either, placing 15th and 29th before coming back with a third in Race 8. However, they fell to 27th in Race 9 and are 20th overall, so have missed out on the Medal Race.

Thomas Needham and Joel Turner are in 34th overall at the top of the Silver fleet leaderboard, while Kurt Hansen and Simon Hoffman are 57th.

None of the trio of Australian teams made it into the 49erFX Gold fleet; Tess Lloyd and Jaime Ryan missed the cut by two places. Following four races today, they are at the top of the Silver fleet in 26th place, having enjoyed a solid day with 3, 1, 9, 5 results.

In the 470 Women’s, Nia Jerwood and Monique de Vries fell foul of the Black Flag in Race 3, but put it behind them to finish ninth in Race 4 for 26th overall.

The two Men’s 470 teams did not fare much better, posting double digit results in their three races. Chris Charlwood and Josh Dawson are 25th overall with a best result of 13th, two points ahead of Rio Silver medallists Mat Belcher and Will Ryan. Their best result was 17th in Race 4 and it is most uncharacteristic to find them sailing outside the top five.

In the Laser class, Luke Elliot is in 43rd overall, after placing 30th and 35th. Sailing in the Yellow fleet today, Elliot topped the leaderboard in Race 7, but it does not come into the overall results as yet, because the Blue fleet is yet to sail a seventh race.

Officials planned to start racing at the earlier time of 10.00am local time, looking to make the best of forecast stronger winds for this morning. To the relief of on-water management and the athletes, racing started from 11.10am in 6-8 knots, the best breeze of the Olympic classes regatta so far.

The 49erFX Gold fleet was away at 11.10am in 7 knots, the rest of the classes following in quick succession. Race 2 for the 470 Men’s and Women’s was abandoned following General Recalls before the AP flag went up. It was not long before both were underway under the threat of the Black Flag. It was worth the wait, as the breeze had picked to as much as 8 knots.

Racing continues Saturday local time, including Medal Races in the 49er and 49erFX. The event closes on Sunday 21 April with the 470, Laser and Laser Radial Medal Races.

Medal Races will be screened live at: https://youtu.be/kyGGiRqiUdw