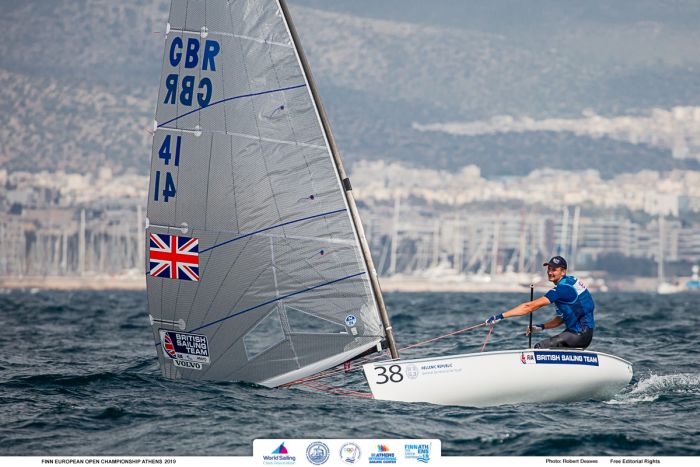 Giles Scott, from Britain, leads after the first day of racing at the 2019 Finn Open Europeans in Athens following three races on Tuesday. Scott won two races and placed third in the other to hold a four-point lead over Andy Maloney, from New Zealand, who won the second race of the day. World champion, Zsombor Berecz, from Hungary, is third overall. Joan Cardona, from Spain, in 11th overall, holds a sizable lead in the U23 European Championship.

Overlooked by the Acropolis of Athens in the distance, the 84 sailors from 33 nations were looking for some Greek wisdom, to prepare themselves for three tough races in challenging conditions, and conquer the Greek winds.

After Monday’s racing was lost with no wind, the fleet was keen to get racing on Tuesday, but there was a further postponement on shore, waiting for wind to build. Finally at 13.30, the fleet was sent out and enjoyed three great races in a solid breeze, building from 10-12 knots to 15-16 later in the afternoon.

Race 1 got away first time with Anders Pedersen, from Norway, leading round the top mark from Josip Olujic, from Croatia and Scott. Scott took the lead downwind but lost his advantage on the second upwind with Fabian Pic, from France and Alican Kaynar, from Turkey, closing right up on the Olympic champion. However, Scott extended again on the final downwind for a comfortable win from Nenad Bugarin, from Croatia and Kaynar.

The wind looked like it would drop for a while but then came back in at 14-15 knots under clearing skies. The second race took three attempts to get away, but then started cleanly under the black flag. After placing fourth in the opening race, Maloney led all the way in Race 2, rounding the top mark ahead of Brits, Henry Wetherell, and Scott. Maloney sped away from the fleet for the race win, while Berecz moved through to take second from Scott.

The breeze dropped slightly for the third and final race of the day. Maloney was again in the mix, rounding just behind Cardona and just in front of Tapio Nirkko, from Finland. Scott was not far back and moved ahead at the gate, to go on to take his second win of the day. Cardona held on for second, while Maloney crossed on third.

The championship is important to many sailors because it is a nation qualifier for the Tokyo Olympics, with four spots available. One of those if Olujic, who just missed out in Aarhus.

“Happy with my starts, so I am happy with the day and fighting for these four spots left, so I think comparing to the other guys, so far I did well. It’s really important for me, and really important for Croatia. Personally I missed qualifying in Aarhus by six points and one place, I was 11th, so it was kind of painful, but hopefully I learned something from it and I am going to keep fighting and try to do it here.”

Tuesday, “was a really nice day. Nice breeze, so was intense. I don’t know about the other guys but after the World Sailing events, we kind of forgot how it is to race Finns. Having a race over 60 minutes is hard, but it’s nice. You have to work totally different to 50 minutes races to take care of your energy and use it wisely, not spend everything fast, so it’s a totally different approach.”

In second overall, Maloney was on form following his win at the Trofeo Princesa Sofia in April.

“It turned out to be a really nice this afternoon with anywhere from 7-15 knots of breeze with some nice waves. For myself, I had a really good day with three top fives, which is awesome in a big fleet. It was really tricky with a 10-15 degree range out there and quite a lot of pressure came with these shifts, so it was pretty easy to get stuck on the wrong side of things if you weren’t nailing it.”

“Josh [Junior] and I are both here to keep progressing and keep seeing how the things we have been working on are going and figure out what to work on next, ahead of going to Tokyo next month. We are in Tokyo for the next three months for little stints at a time, so that’s the big part of the year, but here we will just be learning as much as we can.”

“With 80 to 90 boats on one start line, it’s massive, so trying to figure out where to start on the line and how you are going to get out of that line on the right tack as soon as possible is pretty tricky. It’s probably the hardest thing of the day. You can get pined pretty easily going the wrong way so I think I did that pretty nicely today.”

Another sailor still looking for a place in Tokyo is Pedersen. “I didn’t qualify in Aarhus so this is really important to hopefully get a nation spot here so I have to fight for that through the week. It’s tough racing, and it’s really tiring. All the guys are flat out for 75 minutes, so that hard and tough for the body for sure.”

“It was good to finally get racing. Three heavy races. I think the boat speed is good and the decision making is good. I felt unlucky to get a yellow flag in the first race when I was leading, so that sucked. I caught some bad air and fell back to 20th so that was not good race, but the last two races were good.”

“The first race was a bit light and we didn’t have free pumping, they shut that off at the top mark, and the wind was very up and down, we got some clouds coming in bringing some more pressure and taking it away so it was a bit of everything.”

Maloney concluded, “I think all the forecasts are a bit varied so it might be a bit lighter for the rest of the week. Today might have been the nicest day of the week, but we’ll see.”

After three races on Tuesday, the event is now just one race behind. Three more races are scheduled for Wednesday, which would bring it back on schedule.

Racing is scheduled to start at 13.30, with live tracking available through YouTube on the event website 2019.finneuropeans.org.