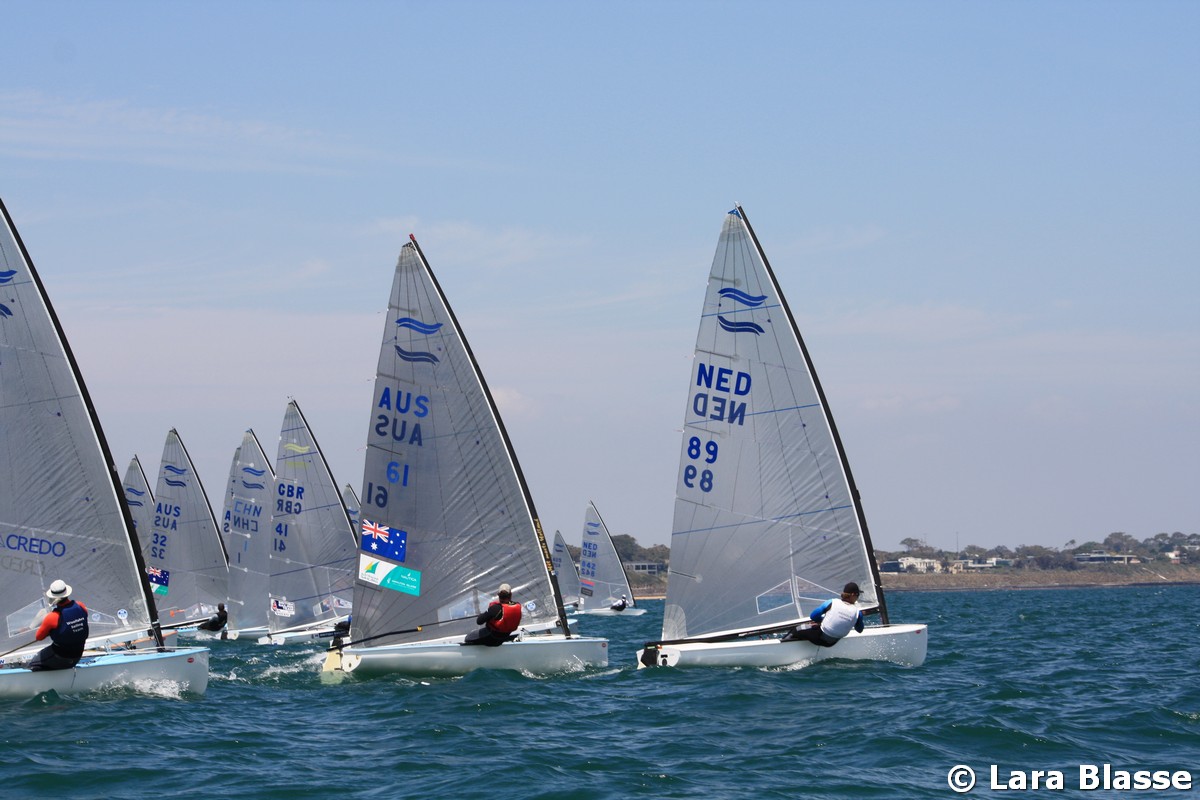 Forty Finns enjoyed a day of two halves on the opening day of the Ronstan Australian Finn National Championship, taking place at Black Rock Yacht Club in Melbourne. In a day that went from light to pumping, Giles Scott, from Britain, took both races to lead from Nichols Heiner, from The Netherlands, and the defending Australian champion, Jake Lilley.

The fleet sailed out to the start in very cloudy conditions and very light gradient south-westerly in place. After a short postponement, the first start resulted in a general and the Race Officer, Mark Taylor, went straight back into sequence again under ‘U’ flag. This time the fleet got away cleanly in a 5 to 8 knot southerly. Up the first beat the wind started to die and become patchy across the course as the sea breeze struggled to build.

Scott led round from Lilley and He Chen, one of three Finn entries from China. The wind was very soft down the first run, which made for a very long leg. Scott retained the lead and the first boats held their positions and headed out to sea around the gate. The second beat was shortened, with the fleet spread out across the course looking to pressure in the 3 to 5 knots of breeze. The run was again shortened to a finish half way up the first leg. Scott took his first win of the day from Lilley and Chen.

As the fleet waited for the second race, the last of the cloud finally burnt off and the sea breeze quickly started to build. The course was set at 180 and went into sequence in 15 knots of breeze, with Oscar flying for the first time.

Heiner started cleanly at the boat end of the line and led out with Scott, Andy Maloney, from New Zealand and Australia’s Oliver Tweddell close by. By the top mark the wind had built to 20 knots and continued to build surprisingly quickly. By the bottom gate the first time a number of competitors decided discretion was the better part of valour and wisely headed home.

By the second beat the breeze was up to 25 knots gusting to 30 knots and boats were starting to get into difficulty and not just at the back of the fleet. Pieter-Jan Potsma, from the Netherlands, had his sail pull out of the track and threaten to break the mast and finally had to be towed in. In the end it became a bit of carnage with big Black Rock waves on a 25+ knot sea breeze.

The Australian Sailing Team shifted into rescue mode. Tweddell took the Australian RIB back out with coach, Rafa Trujillo, at the helm to sail in Bill Hodder's boat and then immediately turning around and taking Jock Calvert and Lachie Gillam back out to sail another boat in. In the end six boats were towed in by the rescue and coach boats.

Lilley commented, “Interesting day with a late building, and sudden, sea breeze. There was a lot of cloud around this morning, which stuck around for Race 1. We had a light patchy race and then I was thinking a nice sea breeze for Race 2 but it ended up thumping in at 22 knots. So a great first day of two halves.”

Lilley picked up an eighth in Race 2 but said “There are so many good guys here that any time you are top 10 is a blessing.”

Top Kiwi today was Andy Maloney, who scored a 9, 3.

“Day 1 was pretty hard. I struggled in a few areas but will try a few little things tomorrow and see how I go.”

He has been part of a group of sailors training in Australia in Sydney and Melbourne for the last few months. “It’s been a great training group in Australia. I think we have five of the top 10 guys from the Aarhus Worlds here, plus Giles who has come back and set the bar again.”

“This week is going to be a fun battle with decent breeze forecasted for most of it. Looking forward to it.”

Scott agreed, “Aussie training has been really good if you ignore how far away from home it is. It’s been great to get down here, enjoy the sun and have some good sailing conditions with some good guys. It’s been nice for me to come here and focus on getting back to the nitty gritty of Finn sailing.”

“My day was good. It was a day of two halves with a light Race 1 and a building sea breeze to 25 knots for Race 2. I managed to get to the top in the lead and had a good first run in both races, with a lead I held onto for the remainder of the races. “

“It’s been interesting doing some longer one hour races. We’ve had some pretty big courses.”

Racing at Black Rock continues until Saturday with two races scheduled each day to complete a 10 race series.