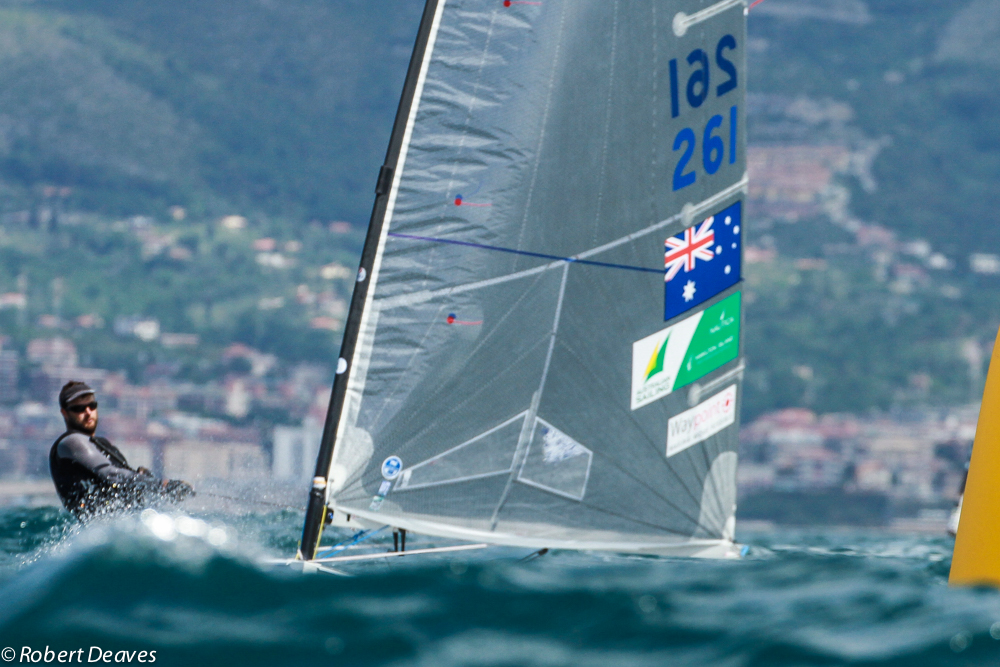 Giles Scott (GBR) has done almost enough to lift his fourth Finn Gold Cup with a day to spare in Gaeta on Thursday, after three races were sailed in a solid 18-25 knots. He goes into Friday's medal race with a 21 point lead over second placed Jonas Høgh-Christensen (DEN). Pieter-Jan Postma (NED) is in third a further 14 points behind. Scott won two races while Fabian Pic (FRA) secured his place in the medal race by winning the first race of the day.

The patient wait for wind was rewarded on Thursday with more wind than the 72 boat fleet has seen during the rest of the week combined. Starting at 14-16 knots, it rose through the day, as did the sea state, to 25-28 knots, providing some awesome racing conditions for the strongest sailors in the world of sailing. It was a supreme test of physical prowess and sailing skill.

While Scott recorded a 7,1,1 to take an unassailable points lead into the medal race, Oliver Tweddell (AUS) was the next best performer of the day with 2,6,2. He said, “It was a brutal day and I think a lot of people will be pretty tired. I had an awesome day so I am stoked with that.”

“It was an awesome, awesome day for Finn sailing, the physicality of it just shone through.” See a short video here.

“It has been a really light week up to today and unfortunately I hadn't sailed too well in those four races but today I was going to give it everything I've got.” He ends the day in 13th just 10 points from the medal race.

Of the several national selection trials going on this week the closest has probably been the Italians. The 2008 Olympian Giorgio Poggi (ITA) was the best performer of the week, and goes into the medal race in sixth place overall, but still awaits the official decision. “I sailed three nice races today. This was was last regatta where the federation take a look to see who will go to Rio.”

Poggi was instrumental in bringing the event to Gaeta. “I was very happy to have the event here in Gaeta but I said then that we'll have some nice wind. In the first days we didn't but at at the end it came and was a really beautiful day.”

“It was a really tough week with many sailors going up and down. For me there was only one bad race and all the other races I was always top 15 and this was the key to have a good championship this week.”

While Høgh-Christensen has a 14-point lead for the silver the battle for bronze will be tight. Postma holds a narrow margin over Ioannis Mitakis (GRE), Jake Lilley (AUS), the winner of the first race today, Pic, and Poggi, who can all take the bronze medal.

Pic said, “I did a committee bit start and went fully right. It was a good fight with Oli [Tweddell]. I was quite quick downwind, especially the second one. Today I was really under pressure. It was a really hard job. Upwind it was smashing through the waves, so really painful, but I made the medal race.”

“Today for me was OK. I played catch up which went good. But my sailing could be better. I know I have got a different gear still but I didn't fully use it so today. I am happy but it wasn't perfect.”

Scott has all but won his fourth Finn Gold Cup. He just has to sail the medal race. “Today was the first day that stuck to the forecast. The first race was quite shifty but then it really pumped in. Absolutely glamour.”

“The conditions early in the week were really tricky and for a lot of top guys it was hard to stay consistent to deal with 30 degree shifts on a start line that was three-quarters of a mile long and a beat of 1.5 miles with 75 boats, That was incredible tough to manage, but after an early bad score 38th, it was just about trying to stay consistent.”

“I keep saying it but the Gold Cup is such a special event to all of us as Finn sailors and to be in a position to say that I've won four is a very privileged one to be in. I think there is an awful lot of talent in the Finn fleet at the moment and to be able to come out on top of that is great.”

Phillip Kasueske (GER), the stand out performer of the first four days, was the leader going into the day's races. He struggled in the windier conditions today, capsized several times in the very tough conditions, and ended up just one point outside the medal race, very disappointed. Then in a bizarre twist, the late disqualification of the boat directly in front of him put him back into tenth place and into the medal race.

The final race for the rest is scheduled for 11.00 on Friday with the medal race starting off the old town of Gaeta around 13.00. It will be a big event for the small town, with local media and school children being invited to come along and watch.

We will try to bring as much as possible live from the water through the Finn Class Facebook page.