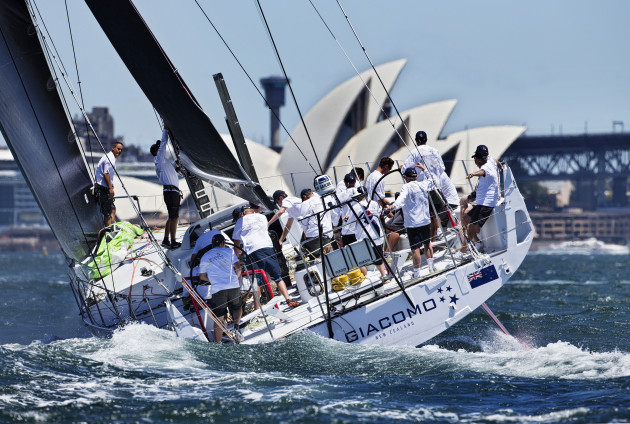 New Zealand winemaker Jim Delegat says the Land Rover Sydney Gold Coast Yacht Race will be the first of many Cruising Yacht Club of Australia (CYCA) races on the agenda for his V70, Giacomo, and he is ready to face the classy contenders already entered, among them the V70 Black Jack, which Delegat is keen to have a re-match with.

“We’re heading back to Sydney soon, where we’ve booked a hardstand at Noakes,” said Delegat from New Zealand.

“The plan is to take part in most of the CYCA offshore series (the Blue Water Pointscore), including the forthcoming Sydney Hobart Race. We’re pretty excited to be coming. We’re looking forward to racing Black Jack (Peter Harburg) again and to racing the great array of fast yachts you have.

Delegat’s last race from Sydney is memorable for all the wrong reasons. In a tussle with Black Jack in the 2014 race to Hobart, the Kiwi boat’s rig came tumbling down close to the finish, making it a 3-0 score line in favour of Black Jack from two Hobart and one SOLAS Big Boat Challenge races. The New Zealander is hoping a summer in Sydney will reverse the trend.

“There are so many wonderful regattas to sail in, so you will be seeing quite a bit of us out there on the Sydney Harbour,” added the New Zealander who is pinning his Rolex Sydney Hobart hopes on good results throughout the CYCA’s Blue Water Pointscore (BWPS) this season, starting with the race to the Gold Coast.

Delegat, the producer and marketer of the globally successful Oyster Bay wines, says Giacomo, designed by Argentinean, Juan Kouyoumdjian, is in great shape.

“Spending more time on the water out of Sydney will be beneficial, so we are pretty excited about the whole Blue Water series and of course the forthcoming Sydney Hobart. You have a couple of V70's and a great array of fast yachts, so it's a compelling proposition for us,” Delegat admits.

And he is right; the competition in Blue Water Pointscore will be no pushover. Entries received to-date for the Land Rover Sydney Gold Coast Yacht Race include the 2015 Sydney Hobart winner Balance (Paul Clitheroe), Secret Mens Business from South Australia (Geoff Boettcher) and Celestial (Sam Haynes). The trio ofTP52’s are in good form and will be joined by at least two others.

As the open record holder, the Oatley family’s Wild Oats XI will obviously be the benchmark for line honours, but should the weather be conducive to the V70’s, anything could happen.

Already 42 entries have been received for the race, including boats representing NSW, Queensland, South Australia, Western Australia and Victoria.

The Land Rover Sydney Gold Coast Yacht Race starts at 1300 hours on 30 July off Nielsen Park, Vaucluse. It is the first race of the CYCA’s Blue Water Pointscore and heralds the start of the northern circuit of races and regattas.

Spectators wishing to view the start can do so in style, as COAST will again be at the start line of the Land Rover Sydney Gold Coast Yacht Race. For details and bookings go to: http://goldcoast.cyca.com.au/spectators.

Entries close at 1700 hours on 8 July, 2016. Online entry and Notice of Race are available at the official race website: http://goldcoast.cyca.com.au