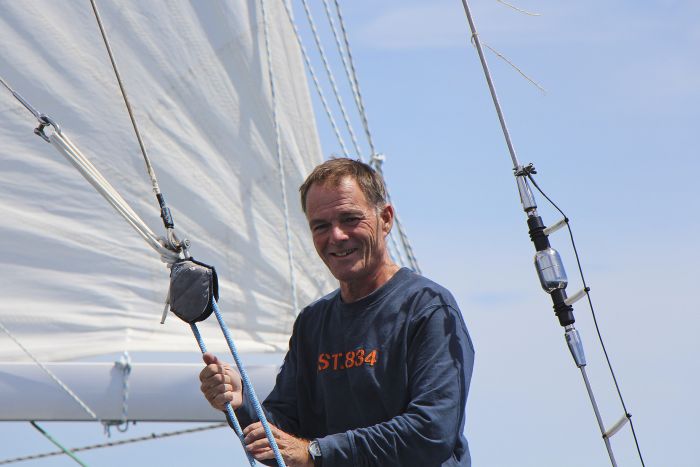 Bright and cheerful Tapio has enjoying his extended solo circumnavigation

Sailing his Gaia 36 Asteria with spinnaker set in glorious weather, Tapio has clearly enjoyed his lengthy solo circumnavigation extended by barnacle growth on the hull.

Barnacle growth was the root cause of Lehtinen's slow solo circumnavigation but the 110 day difference between his and Race winner Jean-Luc Van Den Heede's time was definitely enjoyable.

“I have certainly got my money's worth from the entry fee,” Tapio had joked with Race organiser Don MacIntyre before his return to Les Sables d'Olonne at 20:21hrs on Sunday. “This is the best organised race I have ever taken part in… And the most selfish thing I have ever done… It is the fulfilment of a life-long dream… I'm not enrolling myself just yet, but yes, absolutely, I would do it again!” the 61 year old from Helsinki said at his press conference today.

“Yet asked what was the lowest moment in the race, the answer appeared to cover several months.  “I had been sailing neck-and-neck with Istvan Kopar across the Indian Ocean when suddenly he started to get away. I thought there must be something wrong – perhaps a fishing line caught in the propellor – and dived overside during a calm spell before the Hobart film drop to investigate. It was not a rope or net, but barnacles growing all over the hull. When I first saw them on the bottom, I knew my race was over.”

Other skippers had taken the opportunity to clean their hulls during their compulsorary 24 hour stop in Tasmania, but by the time Tapio and his Gaia 36 Asteria reached Storm Bay Australian authorities had put a stop to it. Careening hulls had to be undertaken beyond the 200 mile territorial waters.

Tapio readily admits to an aversion to sharks, so when he prepared to dive overside during a calm period after leaving Tasmania he recalled “I was tying my improvised boarding ladder to the boat in preparation of diving overboard and spotted this huge shark swim alongside the boat – and that was the worst day of my life.”

Tapio was accompanied the last 10 miles to the finish by Bernard Moitessier's famous yacht JOSHUA a French entry in the original Golden Globe Race 50 years before. “I sense the smell of Tahiti in Les Sables” Tapio shouted across in reference to Moitessier's decision to foresake the success of finishing by continuing towards a second circumnavigation 'to save my soul' as he put it, before finally dropping anchor off the Pacific island.

Sir Robin Knox-Johnston has published his long awaited Report considering the lessons learned from sailing small yachts in extreme conditions including the 5 dismastings suffered during the 2018 GGR.