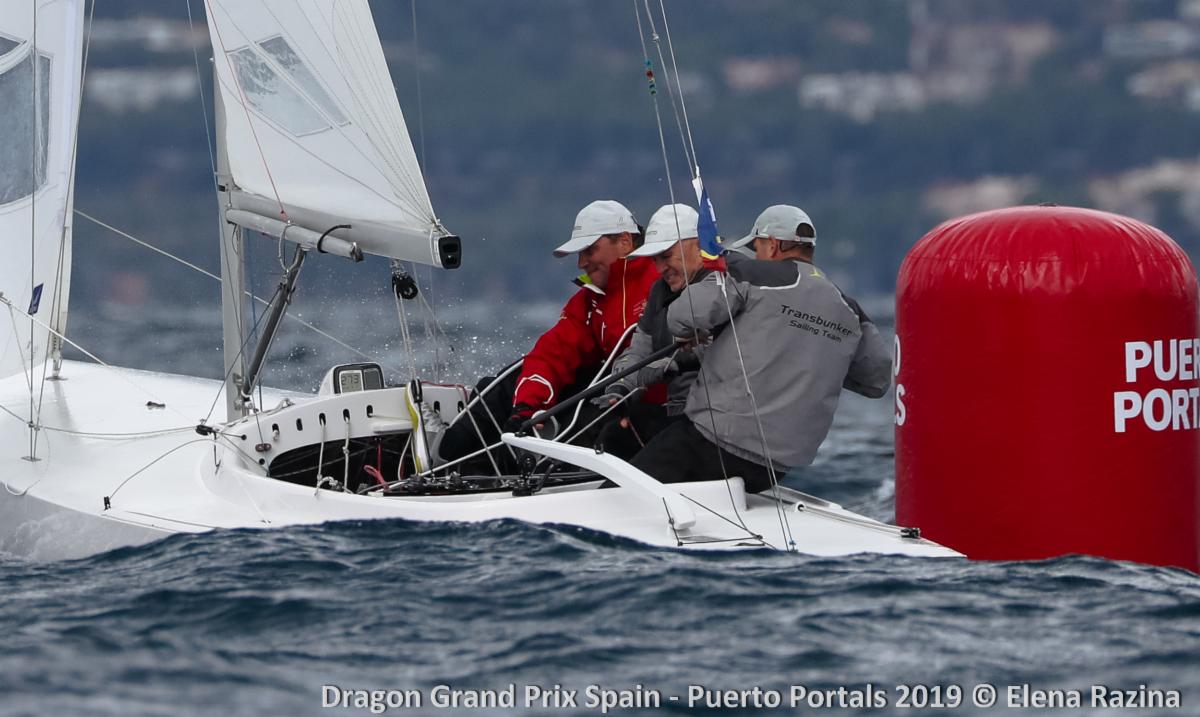 13/11/2019
11 November 2019 – Puerto Portals, Mallorca – The fourth and final event of the Dragon European Grand Prix circuit, the Dragon Grand Prix Spain hosted by the Club de Regatas Puerto Portals, began today in the Bay of Palma (Mallorca) with two exciting races in northerly winds. After overnight thunderstorms, the day dawned cloudy and everything pointed towards a hard day for sailing, although in the end the conditions were near perfect to compete.
“I hope we have this luck all week,” said Marta Reynés, of the Club de Regatas Puerto Portals and sports coordinator of the event.
Gusts of just over 20 knots were recorded in the first race as the fleet of 41 teams from 12 countries, completed a three leg 7.2 mile windward/leeward course. The second race consisted of 5 legs, the first four of 1.8 miles and the fifth of 1.2, with a reaching finish. The wind, which at one point in the last race fell briefly to five knots, oscillated very little: from 0 to 355 degrees. “There were the typical shifts when the wind is blowing offshore, but in general it was pretty stable,” said Reynés.
Otto Pohlmann’s Meerblick (GER) took first place in the provisional classification with a third and a first in the two first races of the eight race regatta. This gives him a three-point advantage over his compatriot Desert Holly, skippered by Stephan Link (2 + 5). In third place sits another German Dragon, Ingrid, helmed by Dirk Pramann (8 + 2), who led for the first three legs of the second race, but ended up conceding victory to Meerblick in the closing moments.
The Russian Rocknrolla, skippered by Dmitry Samokhin (1 + 14), completed an astonishing first race, heading the fleet at all the marks. However, a bad start in the second race hindered his chances of finishing the day on the podium. On the contrary, Peter Gilmour, commanding the only Japanese team of the fleet, went from less to more and now lies fourth overall with 11 points (7 + 4).
After racing overall leader Otto Pohlmann paid tribute to his crew, Olympic Star Class Gold and Bronze medallist Mateusz Kusznierwicz and reigning Dragon World Champion crew Simon Fry, saying, “It was our first time to race on the outer course area and we were looking forward to what was going to happen there, so for us it was new today but we hit always the right side and finished very well. The closest moment as always is the start but in both starts we came very well out of the fleet and we had good speed so could tack to decide where we wanted to go, and the rest was down to boat speed and a good tactician.”
Also quite happy with his performance today was Klaus Diederichs (GBR) sailing Fever, who hasn't set foot in a Dragon since the World Championship in January. “The boat has been in a container since the Worlds in Fremantle,” explained Diederichs after racing “and we hadn't even seen her until we arrived here a few days ago, so we're pretty happy to with how things went.” With a fifth and seventh place Diederichs slots into fifth overall, a single point behind Heerema.
For two of the leading protagonists in the European Cup Series today was not such a success though. Both Portugal's Pedro Andrade, who won the opening event in Cannes, and Britain's Grant Gordon, who was victorious in leg two in Cascais, found themselves struggling to escape the start lines cleanly and gain traction around the course. In a fleet of such high quality the slightest error is mercilessly punished and despite the best efforts of both teams they find themselves down in 18th and 19th places overall respectively. Gordon's crew member, J80 World Champion Ruairidh Scott, summed up their situation wryly saying “Some days you are the hammer. Some days you are the nail!! Today was one to forget. Onwards and upwards tomorrow!!”
The regatta continues until Thursday with up to six further races planned. This regatta is the fourth and final event in the 2019 Dragon European Cup Circuit. The overall scores this week will be combined with the results from the earlier events in Cannes, Cascais and Kühlungsborn to decide the overall winners of the series, who will receive the new Standfast Trophy, and the winning Corinthian team who will receive the the Lowell Phyllis Cup.
The top twenty boats from the overall ranking will then move forward into the two day Grand Final knock out competition, being raced on Friday and Saturday, to decide the ultimate Dragon European Cup Champions, who will receive the Sami Saloma Trophy.
Provisional Top Ten After Two Races