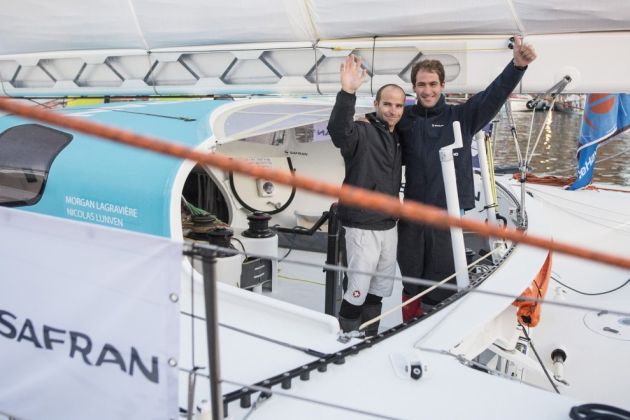 At 0730hrs on Sunday morning Morgan Lagravière and Nicolas Lunven cast off to leave the Paul Vatine harbour. The concentration was visible on the faces of the Safran skippers, who seemed to have started their race already. A few hours before the start, both felt some apprehension – understandably -ahead of tackling their first major ocean crossing in an IMOCA 60.

“But the fact we are leaving as a duo is reassuring,” Lagravière said. “And in the end, being rookies relieves some of the stress because we don’t really know what to expect.” After a very busy lead-up to the race, the two sailors are eager to start.

“We felt the atmosphere gradually building in the harbour in Le Havre,” Lunven said. “It's time to leave now.”

The start of the 12th Transat Jacques Vabre was in light conditions. “We’re almost at the heart of a high pressure system, with clear skies and low wind (under 5 knots),” Lagravière said. After the starting canon fired, Safran and the other 19 IMOCA competing set off on a route of 16 miles towards Etretat.

Then there should be a southeasterly of around ten knots in the late afternoon before climbing to nearly 20 knots on the first night at sea. But it is negotiating a very deep depression that is occupying everyone’s minds.

“The adrenaline will gradually increase as we approach this depression because we have to get around it one way or the other,” Lagravière said. “We’ll happily be able to acclimatise on board before the sea and wind conditions deteriorate until they become extreme on the third day of racing.”

For Lagravière and Lunven it will be a question of finding the right compromise between consistent performance and preserving the boat.

“We’ll handle the situation intelligently, without taking risks,” Lagravière said. “It will be about keeping calm and making the right decisions for achieving the primary goal, which is to get to Brazil.”

To face these challenging conditions, the Safran duo can count on their good understanding and successful preparation. “A lot of hard work has been done on the boat by the technical team, for which we are very grateful. Now it is our turn,” the two skippers concluded.